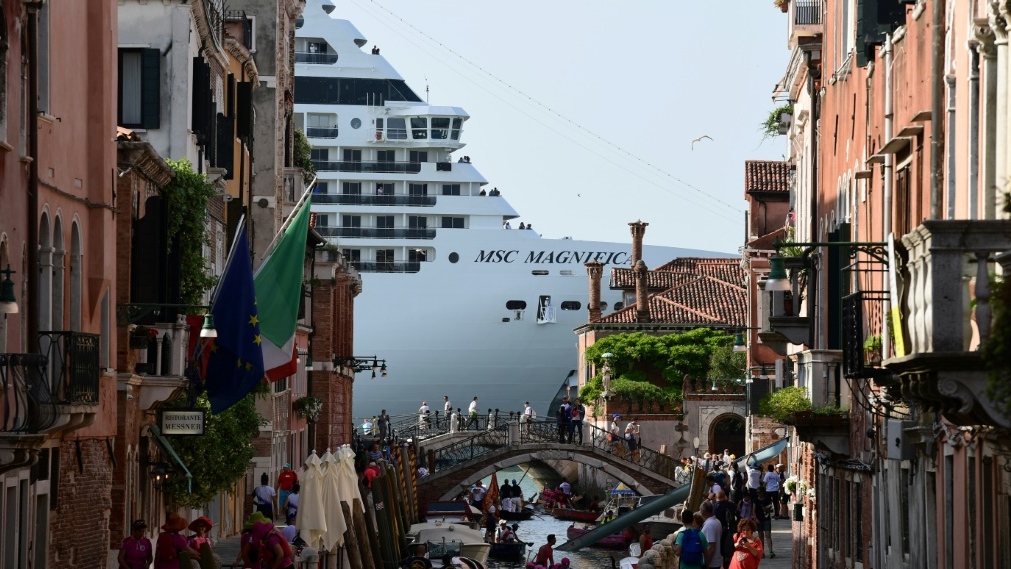 Many local people want to see massive cruise ships such as this one kept at a distance from Venice's ancient buildings. (AFP)

ROME, Italy - A cruise ship narrowly missed a yacht while being towed out of Venice late Sunday, just a month after a collision there renewed the controversy over the giant vessels.

The 12-deck Costa Deliziosa, which is nearly 300 metres (1,000 feet) long and carries more than 3,800 passengers and crew, was being towed out in stormy conditions when the near-miss happened.

A video posted by a Venetian writer and artist, Roberto Ferrucci, on his website www.robertoferrucci.com showed the massive cruise ship passing very close to a moored yacht.

The crew of the 50-metre yacht rushed from their ship to the quayside as the cruise ship brushed by, the AGI news agency reported. The incident happened not far from the famous Piazza San Marco (Saint Mark's Square).

The lead tug managed to pull the cruise ship away from yacht and lead it safely out of the lagoon.

But the near-miss comes only weeks after a June 2 incident in which when another cruise ship, the 13-deck MSC Opera, scraped the dockside and knocked a small tourist boat, injuring four people.

That accident reignited a long-running row over the damage caused to the city and its fragile ecosystem by cruise ships that sail exceptionally close to the shore.

Critics say the waves the ships create are eroding the foundations of the lagoon city, which regularly floods, leaving sites such as Saint Mark's Square underwater.

Two years ago the government announced that larger ships would be diverted away from the historic centre -- but failed to follow through on the pledge.