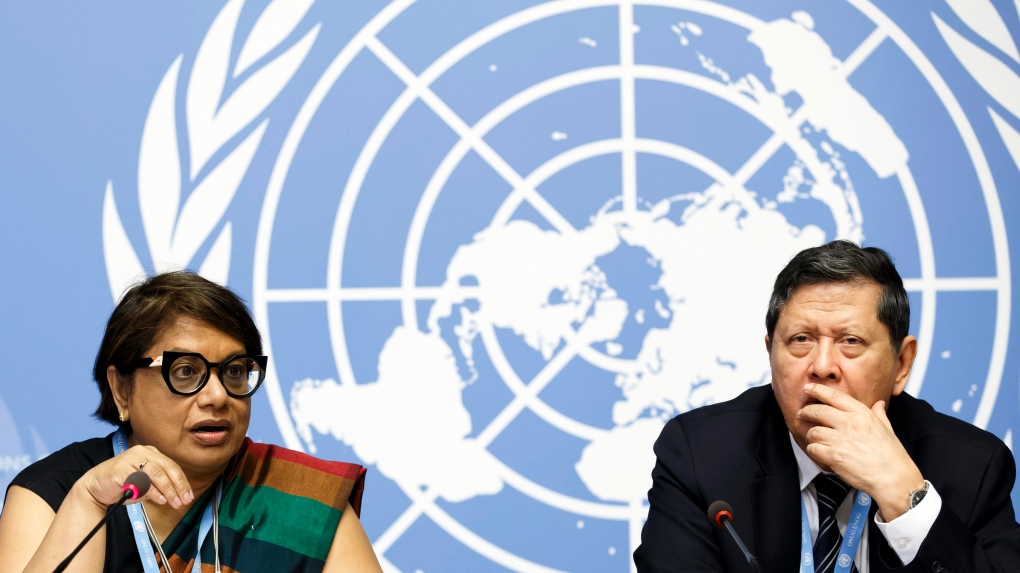 GENEVA -- UN-backed investigators who examined a bloody crackdown by Myanmar security forces that caused hundreds of thousands of Rohingya Muslims to flee to neighbouring Bangladesh issued a searing critique Tuesday of the United Nations' own response to the human rights crisis.

In a 432-page report, the members of a fact-finding mission on Myanmar fleshed out preliminary findings and recommendations released in a shorter version three weeks ago.

"With a heavy heart and deep sadness, we have drawn conclusions, on the basis of the facts, that we never expected would be as grave as they are," team chairman Marzuki Darusman said he presented the report to the UN-supported Human Rights Council.

"What we have found are not only the most serious human rights violations, but crimes of the highest order under international law," he said.

The team reiterated that some top Myanmar military leaders should be prosecuted for war crimes, crimes against humanity and genocide against the Rohingya during a deadly crackdown that erupted in August 2017 following militant attacks on security posts in Rakhine state.

In a rare rebuttal by Myanmar's government, its new ambassador in Geneva lashed out at what he called a "one-sided" report. The team has said Myanmar's government had not responded to its report or honoured requests for access to violence-hit regions.

"The way the report portrays ... the national races of Myanmar is misleading," the ambassador, Kyaw Moe Tun, told the 47-member body. "It also undermines the government's effort to bring peace, national reconciliation and development to the entire nation."

After Marzuki spoke of the rape of women and girls by military forces, the ambassador countered, "We share deep sympathy and concern for all displaced persons, especially women and girls."

The full report also provided new details about the investigators' concerns about how the United Nations reacted during the spasm of violence. It noted that the "only statement" from the UN resident co-ordinator's office "was to condemn the ARSA (militant group) attacks and losses suffered by the Myanmar security forces."

The council created the fact-finding mission 18 months ago, after years of abuses against ethnic minorities in Myanmar, focusing on the time since 2011 when the country began opening up after decades of isolation under a long-ruling military junta.

Though the investigators looked at the treatment of minority groups across the Southeast Asian nation, their mandate came just six months before the crackdown against the Rohingya in Rakhine, injecting the mission with far greater importance to help detail those abuses, crimes and human rights violations.

The report provides details of violence in Kachin, Shan and Rakhine states, much of which has been documented and made public through collection of witness accounts, satellite imagery and other sources. It cited allegations of crimes by the military and other security forces including murder, torture, pillaging, execution without due process, rape, sexual slavery and hostage taking.

It said some acts by ethnic armed groups and the Rohingya militant organization ARSA could also constitute war crimes.

Crimes against humanity, war crimes and genocide can be considered by tribunals such as the International Criminal Court, but Myanmar is not a party to it. The country's government has snubbed a ruling by the court's judges that said the ICC has jurisdiction to investigate alleged crimes against the Rohingya. The court's chief prosecutor said Tuesday she was opening a preliminary investigation into Myanmar's expulsions of Rohingya.

The report's critique of the United Nations focused not only on the world body's response to the Rohingya crisis, but its efforts across the country.

For example, the investigators noted that the UN had rolled out a "Human Rights Up Front Action Plan" in Myanmar in 2013, but said its "human rights driven" approach was "rarely, if ever, pursued."

"Rather, it was largely 'business as usual,' with development goals and humanitarian access prioritized only," the authors wrote.

They cited allegations that some UN personnel who tried to pursue a human rights agenda "were ignored, criticized, sidelined or blocked in these efforts."

They alluded to criticism from Fieldview Solutions, an outside group that works to advance human rights, in July that cited some in UN and humanitarian circles for not doing enough to expand their "political space" in Myanmar, adding, "The Myanmar government has learned that it can count on UN and humanitarian self-censorship."

The UN experts said some UN entities and staffers showed "a lack of co-operation" with their work, and "appeared to view it as a threat, rather than a means to address the most deep rooted human rights challenges facing Myanmar."

"This attitude and approach must change," they added.

The investigators did acknowledge that some people in the country had faced "intimidation and reprisals" for their "engagement" with the United Nations.

The team renewed its urgent call for "a comprehensive, independent inquiry into the United Nations' involvement" in hopes of "establishing whether everything possible to prevent or mitigate the unfolding crises was done." It also sought to draw lessons and -- "as appropriate" -- make recommendations on accountability.

The investigators bemoaned that "there has been no review of what happened, of where the approach taken had some positive effect and where it did not, and of how the UN's approach could be improved in future crises."

Kingsley Abbott, senior legal adviser at the International Commission of Jurists, said the UN's failure to implement the Human Rights Up Front Action Plan in Myanmar requires a credible and transparent investigation.

"The situation has demonstrated yet again that the UN secretary-general and his staff in Myanmar must ensure that the entire UN system actually puts human rights up front in its day- to-day work in the country," he added.

The team said a second fact-finding mission should be authorized to examine continued threats to human rights in Myanmar, and urged the creation of a separate team to collect evidence that could be used in possible future prosecutions.