Crashed jet was 'one of the best' in airline's fleet

TORONTO -- The Ukrainian passenger jet that crashed shortly after takeoff in Iran and killed 57 Canadians was just three-and-a-half years old and had been serviced on Monday.

The president of Ukraine International Airlines, Yevhen Dykhne, said the aircraft was "one of the best planes we had, with an amazing, reliable crew." The crew had collectively clocked more than 30,000 hours of experience, and the crash was the airline’s first fatal incident in its 28 years of operations.

Iranian officials investigating the crash said they suspect a mechanical issue brought down the Boeing 737-800, killing all 176 people on board, near Imam Khomeini Airport in Tehran. The crash was one of the deadliest involving Canadians in history.

Canada is pushing to be part of the Iranian-led investigation, Prime Minister Justin Trudeau said Wednesday. And while the prime minister cautioned against speculation, he said the possibility that the plane was shot down has not been ruled out.

Flight PS752 left for the Ukrainian capital of Kyiv at 6:10 a.m. local time. The plane’s takeoff had been delayed by almost an hour. Once the aircraft finally took off, it never made it above 8,000 feet. It slammed into a field at Khalaj Abad, about 45 kilometres northwest of the airport.

The airline said in a statement that the flight “disappeared from radars a few minutes after departure.”

"Tehran airport is anything but a simple one. Therefore, for several years UIA has been using this airport to conduct training on Boeing 737 aircraft aimed at evaluating pilots' proficiency and ability to act in emergency cases,” said Ihor Sosnovsky, UIA’s vice president of operations.

“According to our records, the aircraft ascended as high as 2,400 metres. Given the crew's experience, error probability is minimal. We do not even consider such a chance."

The timing of the crash, which came just hours after Iran fired multiple missiles at a U.S. airbase in Iraq in response to the killing of a top Iranian general, has raised serious questions.

Gen. Abolfazl Shekarchi, spokesman for the Iranian armed forces, was quoted by the semiofficial Fars news agency as denying the plane has been brought down by a missile.

"The rumours about the plane are completely false and no military or political expert has confirmed it," he said.

Qassem Biniaz, a spokesman for Iran's Road and Transportation Ministry, said it appeared a fire erupted in one of its engines and the pilot lost control of the plane, according to the state-run IRNA news agency. 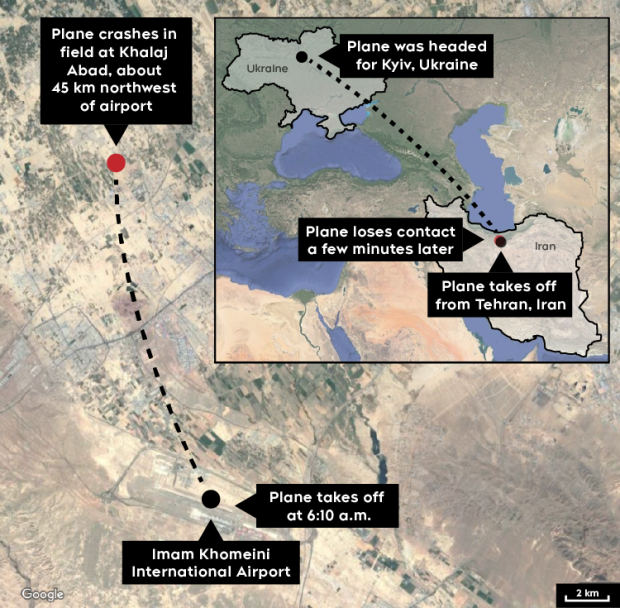 The pilot was unable to communicate with air-traffic controllers in Tehran in the last moments of the flight, according to Hassan Razaeifar, the head of the air crash investigation committee.

The aircraft in question, registration UR-PSR, was built in 2016 and delivered directly to the airline from Boeing, UIA confirmed. The last scheduled maintenance of the aircraft took place on January 6.

Ukraine’s largest airline added that it will conduct an investigation with the aviation authorities of Ukraine and Iran, representatives from Boeing and the National Bureau of Air Accidents Investigation of Ukraine.

The Iran crash was the first fatal incident involving UIA, according to Reuters.

Founded after the collapse of the Soviet Union in 1992, UIA operates out of Kyiv’s Boryspil airport. Planes operated by the loss-making, privately-held UIA have suffered technical problems in flight over the years, but have never crashed before.

UIA states on its website it had been awarded the IOSA - the IATA Operational Safety Audit certificate - meaning its operational and safety standards were fully in line with international requirements.

The airline has a fleet of 42 planes for domestic and international flights including Boeings and Embraer craft.

On Wednesday the airline released details of the crew that perished in the crash. It added that the aircraft’s crew was “augmented with due allowance for the complexity and duration of the flight.”

There were three pilots on board. Instructor pilot Oleksiy Naumkin had 12,000 hours logged on Boeing 737 aircraft, UIA said, including 6,600 hours as captain.

Captain Volodymyr Gaponenko had 11,600 hours under his belt on 737 aircraft, including 5,500 hours as captain and first officer Sehii Khomenko had 7,600 hours clocked on 737s.

The flight time from Tehran to Kyiv is typically around four hours.

UIA said a passenger list would be posted to its website after “final confirmation of their presence on board.”

Aerial footage of the crash site shows debris strewn over a wide area.

“With immediate effect, UIA has decided to suspend its flights to Tehran until further notice,” the company said.

“As at 09:30, UIA (is) in close cooperation with the aviation authorities, takes all measures to determine the causes of the air accident.”

“This is a tragic event and our heartfelt thoughts are with the crew, passengers, and their families,” it wrote.

“We are in contact with our airline customer and stand by them in this difficult time. We are ready to assist in any way needed.”

UIA also offered condolences to the families of the victims and said it would do “everything possible” to support their relatives.

A statement from the U.S. State Department called for “complete cooperation with any investigation into the cause of the crash.”

Friends and relatives seeking information about Canadian citizens believed to be on board flight PS752 should contact Global Affairs Canada’s Emergency Watch and Response Centre by calling 613-996-8885 or 1-800-387-3124 (toll-free) or by sending an email to sos@international.gc.ca.

With files from The Associated Press, AFP

Intelligence indicates Flight PS752 was shot down by Iran: Trudeau

'We all suffer': Vigils held across Canada for the Flight PS752 crash victims

What an unusual right turn after takeoff says about Flight PS752

What we know about the plane crash victims with Canadian roots

138 passengers aboard plane that crashed in Iran were headed for Canada: Trudeau

Crashed jet was 'one of the best' in airline's fleet