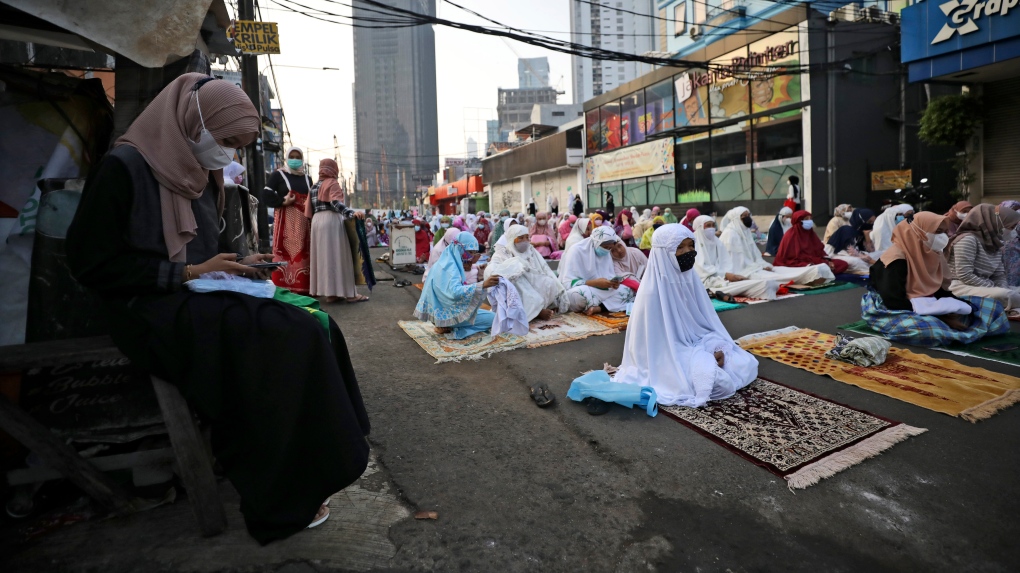 A Muslim woman checks her mobile phone as others sit spaced apart to help curb the spread of coronavirus outbreak prior to the start of an Eid al-Fitr prayer marking the end of the holy fasting month of Ramadan on a street in Jakarta, Indonesia, Thursday, May 13, 2021. (AP Photo/Dita Alangkara)

JAKARTA, INDONESIA -- Muslims celebrated Eid al-Fitr in a subdued mood for a second year Thursday as the COVID-19 pandemic again forced mosque closings and family separations on the holiday marking the end of Ramadan.

In the embattled Gaza Strip, the call to prayer echoed over pulverized buildings and heaps of rubble as Israeli warplanes continued to pound the territory in the worst outbreak of violence since the 2014 war.

Hamas, the Islamic militant group ruling Gaza, urged the faithful to mark communal prayers inside their homes or the nearest mosques and avoid being out in the open.

"It is all airstrikes, destruction and devastation," said Hassan Abu Shaaban, who tried to lighten the mood by passing out chocolates to passersby.

Worshippers wearing masks joined communal prayers in the streets of Indonesia's capital, Jakarta. The world's most populous Muslim-majority nation allowed mosque prayers in low-risk areas, but mosques in areas where there was more risk of the virus spreading closed their doors, including Jakarta's Istiqlal Grand Mosque, the largest in Southeast Asia.

Indonesians and Malaysians were banned for a second year from traveling to visit relatives in the traditional Eid homecoming.

In Bangladesh, however, tens of thousands of people were leaving the capital, Dhaka, to join their families back in their villages for Eid celebrations despite a nationwide lockdown and road checkpoints. Experts fear a surge in cases in a country grappling with a shortage of vaccines and fear of Indian variants of the coronavirus spreading.

"I understand that we all miss our relatives at times like this, especially in the momentum of Eid," Indonesian President Joko Widodo said in televised remarks. "But let's prioritize safety together by not going back to our hometowns."

Despite the similar ban a year ago, the number of daily cases in Indonesia had picked up by 37% three weeks after the holiday. Similar patterns followed other holidays in the country that has counted 1.7 million infections and more than 47,600 fatalities from COVID-19.

While police set up highway checkpoints and domestic flights and other modes of transportation were suspended, anxiety lingers that people will defy the prohibition. Television reports showed city dwellers hiding on disguised trucks or fishing boats and officers at roadblocks being overwhelmed by desperate motorists.

"We followed the government decision that banned us visiting my parents for Eid last year, it's enough! Nothing can stop me now," said factory worker Askari Anam, who used alleys and shortcuts to avoid being stopped from visiting his hometown.

"Of course I'm worried," he said when asked about possibly contracting the virus. "But I leave it to God."

Health Minister Budi Gunadi Sadikin expressed concern of a virus spike and feared people would travel despite the ban.

In the southern Philippines, coronavirus outbreaks and new fighting between government forces and Muslim insurgents in one province prevented people from holding large public prayers. Instead, most hunkered down in their homes, while in Maguindanao province, many families displaced by recent fighting marked the holiday in evacuation camps.

In Malaysia, Prime Minister Muhyiddin Yassin unexpectedly announced another nationwide lockdown from Wednesday until June 7 to curb a spike in cases. Inter-state travel and all social activities are banned, which means that like in Indonesia, Muslims cannot visit each other or family graves.

Muhyiddin acknowledged that many are angry with the lockdown but defended the need for drastic measures, saying hospitals have almost reached their capacity.

"Is this government tyrannical? But I am not a tyrant," Muhyiddin said, "Imagine if you have guests over, then the virus will spread. ... If the guest visits 10 homes, then 10 families will be infected with COVID-19 and in the end as soon as (Eid) ends, the number of positive cases in the country could jump to tens of thousands daily."

Egyptians marked the holiday with group prayers outside, after the government imposed new restrictions on public gatherings. Hundreds prayed shoulder-to-shoulder in the courtyard of an historic Cairo mosque, almost all wearing masks. Group prayers were banned last year due to the pandemic.

"It is a feeling of happiness that we were missing," said Ahmed Saeed, one worshipper. "We hope corona ends and we always gather together."

The Egyptian government is trying to minimize a third wave of infections, with daily reported new cases surpassing 1,000 in the past two weeks. Last week, it ordered a 9 p.m. curfew for restaurants, shops, cafes and social clubs and closed the country's public beaches and parks for the duration of the Eid.

Believers in Turkey were able to attend communal prayers in mosques, however. Hundreds prayed in Istanbul's iconic Hagia Sophia, the sixth-century Byzantine cathedral which was reconverted into a mosque last summer.

At the end of April, the Turkish government imposed its strictest lockdown yet, until May 17, ordering people to stay home, but mosques have been open, citing strict adherence to rules to fight infections.

In Bosnia, the number of people allowed inside the mosques was limited and strict hygiene measures were in place. Older people were advised to stay at home.

Hadis Bajric, a resident of Sarajevo, Bosnia's capital, acknowledged that this Eid would be different to some in the past. "We have to be responsible, considering all these epidemiologic restrictions," he said.

"Eid is the crown of our belief, of everything that we did throughout the year, all that positive energy from the month of Ramadan."

PM Trudeau says he plans to take second AstraZeneca shot, if it's available

Canada could be mixing and matching COVID-19 vaccines by the summer: Tam

What is 'black fungus'? The deadly infection afflicting COVID-19 patients in India

More than 80 per cent of people hospitalized with COVID-19 experience neurological complications: study

Nearly 800 fines issued to returning travellers who refused to quarantine

Ontario working on plan for how to use 250,000 doses of AstraZeneca vaccine that will arrive next week

What does the science say about AstraZeneca? A blood clot expert weighs in