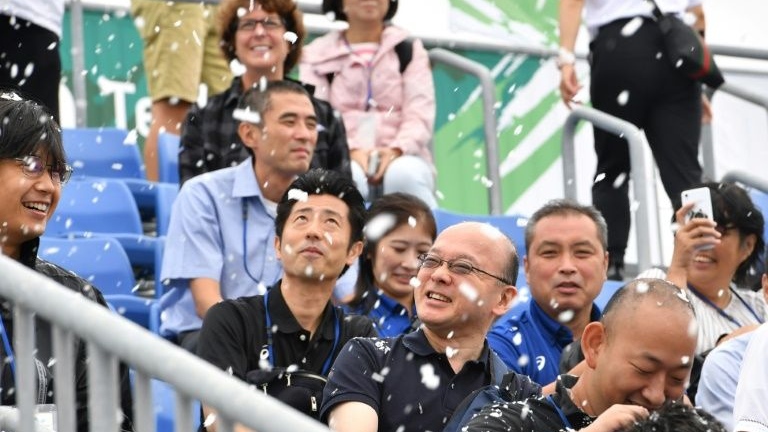 Tokyo 2020 organizers blasted volunteers with fake snow on Friday as they trial ever more extreme ways to beat the heat ahead of the Games. (AFP)

Tokyo 2020 organizers blasted volunteers with fake snow on Friday as they trial ever more extreme ways to beat the heat ahead of the Games.

But instead of light fluffy snowflakes, the crowd, consisting mainly of Tokyo 2020 staff, was pelted with fairly coarse shards of shaved ice at the canoeing test event.

And ironically, after several weeks of almost unbroken heat and humidity, Friday saw temperatures in the Japanese capital drop sharply -- no doubt a relief to millions of Tokyo commuters and players training for the forthcoming Rugby World Cup.

"We are trying everything possible to ease heat risks," said Taka Okamura, from the 2020 organizing committee.

"This is not meant to cool the entire atmosphere but have spectators feel refreshed when the flakes of ice touch them," added Okamura, who acknowledged that the system needed some refinement.

One problem became immediately apparent after the volunteers were doused in 300 kilograms (650 pounds) of snow in a matter of minutes: the "spectators" were quickly soaked through and the floor became slippery -- resulting in one journalist taking a tumble.

Okamura played down any environmental risks from the system -- such as CO2 emissions from the machine -- and declined to reveal its cost. Tokyo 2020 officials have admitted in the past that anti-heat measures will swell the budget for the Games.

Tokyo 2020 organizers have largely won praise for their preparations for the Games. With the construction work on track, IOC President Thomas Bach has said Tokyo is the best-prepared host ever with less than a year to go until the opening ceremony.

But the sweltering Tokyo heat has already proved a headache and there are fears for athletes, volunteers and spectators if conditions in recent summers are repeated at Games time.

Test events in August did little to allay those fears, with a French triathlete taken to hospital with suspected heatstroke, complaints about the water temperature for marathon swimming, and people taken ill at a rowing trial.

One member of the French parathletics team attending Friday's event pointed to another potential problem of the fake snow hose.

"When the wind is blowing in the wrong direction pushing the snow out of the stands, I'm not sure it is going to be that efficient," he said.