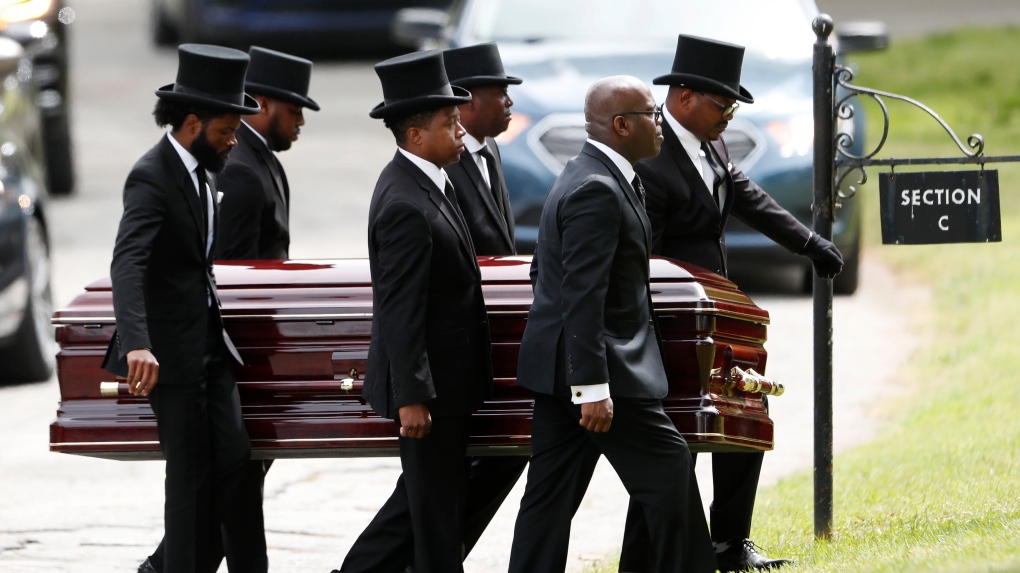 The casket of The Rev. Joseph E. Lowery is moved to graveside by horse and carriage at the Westview cemetery, Saturday, April 4, 2020, in Atlanta. For more than four decades after the death of his friend and civil rights icon, the Rev. Martin Luther King Jr., the fiery Alabama preacher was on the front line of the battle for equality, with an unforgettable delivery that rivaled King's — and was often more unpredictable. (AP Photo/John Bazemore, Pool)

ATLANTA -- Family of the Rev. Joseph Lowery gathered Saturday for a small, private funeral for the civil rights veteran who worked closely with Martin Luther King Jr. and decades later delivered a prayer before 1.8 million at the inauguration of President Barack Obama.

A horse-drawn caisson attended by men in black suits and top hats carried Lowery's casket to Westview Cemetery in Atlanta, where about 10 family members attended a graveside service. The procession first made stops at two churches where Lowery had served as pastor, as well as the non-profit Joseph and Evelyn Lowery Institute for Justice and Human rights that he founded in 2001.

Lowery, 98, died March 27 in Atlanta from what his family said were natural causes unrelated to the new virus. He was best known for helping King start the Southern Christian Leadership Conference, the civil rights organization that Lowery went on to lead for two decades.

Likely by coincidence, Lowery's funeral fell on the 52nd anniversary of King's assassination in Memphis, Tennessee, on April 4, 1968.

A public memorial service is planned for Oct. 6, which would have been Lowery's 99th birthday.

Lowery's daughter, Cheryl Lowery, had previously said 10 family members would attend the funeral Saturday. Specific details of the service were not made public.