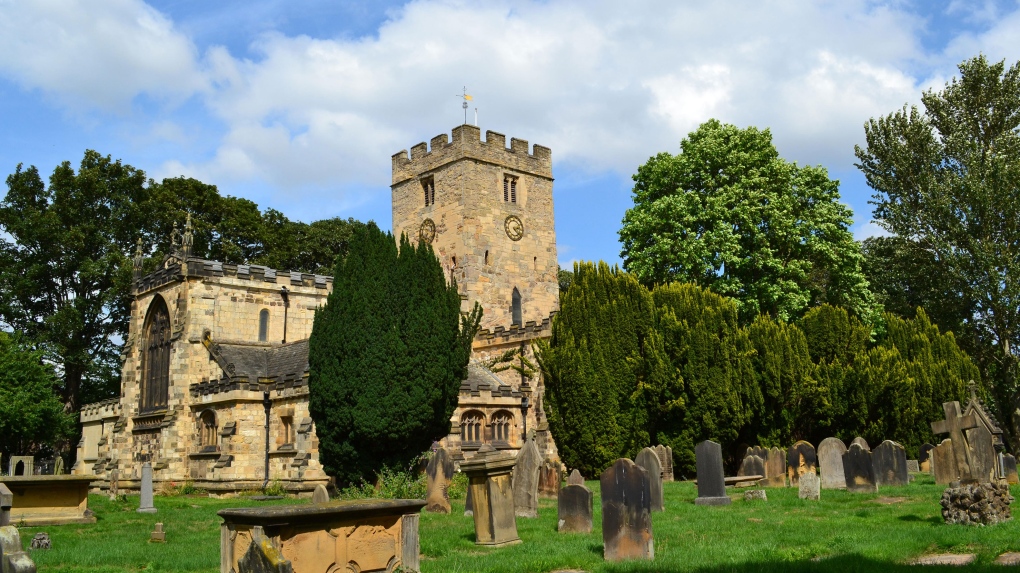 A beer festival held in an English churchyard has provoked a wave of controversy after pictures emerged of visitors reveling among the graves.

Locals in the northeastern town of Stockton-on-Tees flocked to the 1,000-year-old St. Mary's Church for the St. Mary's Norton Beer Festival, which took place over four days and ended Sunday.

In its first outing since the onset of the coronavirus pandemic, the festival was organized by the church in conjunction with the Three Brothers Brewing Company to raise funds for the building, which dates from around 1020.

But what was in previous years a popular, if very local, festivity made headlines in national newspapers after photos emerged of visitors posing for pictures while sitting around a grave, their drinks balanced upon it.

The photographs sparked a storm of anger on social media, with upset residents flooding a local news Facebook group with their comments.

One wrote: "This is disgraceful behaviour, not only from the people involved but from the church for allowing this to happen. Cemeteries are places for people to pay respects and remember their loved ones, they're not beer gardens, and those headstones certainly aren't stools or tables. A public apology is needed here."

Another said: "Why couldn't they sit on the green, which is just outside, instead of on graves? I think it's appalling... What a total lack of respect for the deceased and their families."

And someone else wrote: "I would be livid if I had family buried there."

Not all the responses were negative, however. One commentator wrote: "Oh for goodness sake people are coming together to enjoy themselves I am sure (god rest their souls) people will be happy that they are apart of a celebration and a happy moment please let's enjoy life."

Another pointed out: "The grave in the photo dates from the 1740s. I can't understand the vitriol here targeting the folk in the photo."

In the run-up to the festival, organizers promoted it with a Facebook post promising more than 40 types of beer, 12 varieties of cider, 10 artisan spirits, wines and prosecco.

Defending the event, the vicar of St. Mary's, Reverend Martin Anderson, said it had in part been staged to raise funds for repairs to the historic building. Nevertheless, he apologized for any upset.

Writing on the church's Facebook page on Monday morning, Anderson said: "Over the last few days our doors were open once again to members of our local community, young and old, who came to enjoy our Beer Festival, support local business and spend time with friends old and new.

"Through this we were also able to generate funds to help to maintain our beautiful building, as well as to offer a space for friendship and community.

"Unfortunately, photographs shared on social media have created considerable negativity, and I am deeply sorry for that.

"I am saddened that this event, which we'd hoped would bring joy and positivity in our community, has caused so much upset, and apologise to everyone who has expressed their concern."

CNN has been unable to reach Anderson for further comment.

In a statement sent to CNN, Three Brothers Brewing Company co-founder David Dodd said the plan had been to "focus on great beer and a sense of welcome and community that has just been restricted for so long from people's lives."

He said the event was "split between the carpark with a mobile bar, food from local suppliers and toilets and the main festival in the church," and that the two areas were divided by the graveyard, which had "lots of clear spaces" where tables and chairs had been set up.

Dodd said that "at no point" had staff set up seating around the graves, and "it was certainly not recommended for people to sit on them."

However, he said future events will see signs put up and sections of the graveyard taped off.