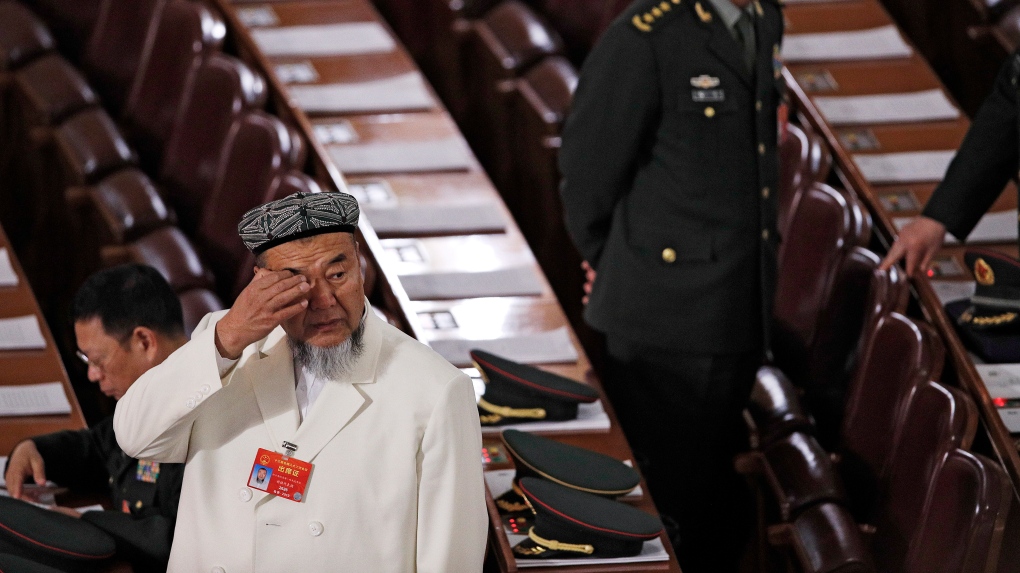 A Xinjiang delegate rubs his eye as he walks by military delegates' seats before a plenary session of China's National People's Congress (NPC) at the Great Hall of the People in Beijing, Tuesday, March 12, 2019. (AP Photo/Andy Wong)

GENEVA -- A top Chinese diplomat claimed Friday that detention centres for Muslims in China's western province of Xinjiang are "campuses, not camps" and said they are eventually going to be closed as a "training program" for ethnic Uighurs is downsized.

At the U.N. Human Rights Council in Geneva, Executive Vice Foreign Minister Le Yucheng reiterated China's insistence that the detention centres are designed to provide training and fight regional terrorism. He also claimed that officials from around the world, including from the U.N., had visited the region and that the detention centres in Xinjiang are "actually boarding schools or campuses, not camps" as reported by critics.

The U.S. State Department said this week that China has "significantly intensified" a campaign of mass detentions of minority Uighurs over the last year, with between 800,000 and 2 million people from the Xinjiang Uighur Autonomous Region interned in camps. The centres have drawn condemnation from across the world.

Le told reporters he had recently visited some Uighur centres in Xinjiang -- and played ping pong and ate halal food there. He didn't specify when the detention centres would be closed, other than telling reporters later that would happen "at the appropriate time."

He also took aim at a U.S.-led event in Geneva on Xinjiang -- calling that "unacceptable" interference in Chinese sovereignty.

The envoy's comments came as China was responding to more than 200 recommendations by other countries on ways that Beijing could improve human rights as part of a Human Rights Council process known as the Universal Periodic Review.

All U.N. member states undergo such screening, generally every four to five years. Le said China had accepted 82 per cent of the recommendations presented during the review last November. The council formally adopted the review of China without a vote on Friday.

The United States, historically one of the few countries to confront China over its human rights records, pulled out of the 47-country Geneva-based U.N. body last year, alleging it has an anti-Israeli bias and other shortcomings.

Norway's ambassador in Geneva voiced the most criticism among diplomats at the council on Friday. Hans Brattskar said Norway regretted that China did not accept any recommendations related to the Uighur detention situation in Xinjiang.