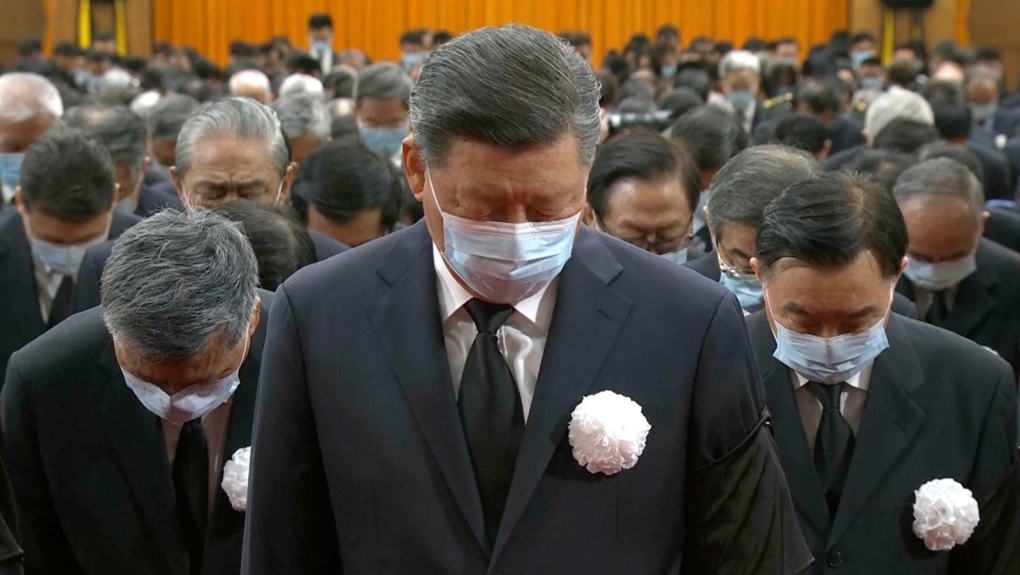 China’s Xi Jinping, pictured here, in Beijing on December 6 called on the country to unite around his leadership as he addressed a memorial service for former leader Jiang Zemin, following an unprecedented show of dissent over his zero-COVID policy and authoritarian rule. (CCTV/AP)

China's Xi Jinping on Tuesday called on the country to unite around his leadership as he addressed a memorial service for former leader Jiang Zemin, following an unprecedented show of dissent over his zero-COVID policy and authoritarian rule.

At the Great Hall of the People in Beijing, Xi led hundreds of China's political and military elites to pay final tribute to Jiang, who died last Wednesday at the age of 96.

The ceremony, broadcast live on national television, capped off a week of memorials for Jiang, who died of leukemia and multiple organ failure in Shanghai at a particularly sensitive moment in China.

The weekend before his death, thousands of people took to the streets across China to call for an end to stringent COVID restrictions, in the most widespread protests since the 1989 Tiananmen pro-democracy movement, which immediately preceded Jiang's rise to power.

In a sombre speech, Xi hailed Jiang as "an outstanding leader with high prestige" and "a long-tested Communist fighter," calling his death an "incalculable loss" for the country.

Standing before a giant picture of Jiang and a row of white chrysanthemum wreaths, Xi called on the nation to "turn grief into strength."

"The entire party, the entire army, and the people of all ethnic groups in the country must unite more closely around the party's central leadership" to achieve great rejuvenation of the Chinese nation, he said.

Sirens sounded across the country as citizens marked three minutes of silence. Stock, currency and bond markets suspended trading during the official period of silence, while public entertainment – including some popular online games – was halted throughout Tuesday.

It was a stark contrast from the recent noisy scenes of protests as young demonstrators called for an end to COVID lockdowns and Xi's repressive policies, from ever-tightening censorship to all-encompassing ideological controls.

The boldest political defiance came from Shanghai, where crowds openly called for Xi to "step down" for two consecutive nights. The site of the Shanghai protests is just a stone's throw from the Huadong Hospital, where Jiang died.

Given China's history of people taking to the streets to mourn the deaths of previous leaders while airing their grievances against incumbent governments, observers had warned that Jiang's death could reinvigorate protests.

But his death didn't lead to an obvious outpouring of anger, as China's security forces had already moved swiftly to snuff out street demonstrations in major cities with a large police presence as well as a surveillance and intimidation campaign. Local authorities also started easing some COVID restrictions, after the country's top health official declared its pandemic controls had entered a "new stage and mission."

As of Monday, more than 20 cities, including Beijing and Shanghai, had scrapped the requirements for negative COVID tests on public transport. Beijing further relaxed rules Tuesday, no longer requiring tests to enter supermarkets, offices, shopping malls, residential communities and airports, though the requirement still holds for restaurants, gyms and indoor entertainment venues.

Tuesday's service followed another closed-door ceremony attended by Xi and other top leaders at a military hospital on Monday, before Jiang's body was cremated.

All members of the party's supreme Politburo Standing Committee attended the farewell ceremony, along with retired leaders – including former president Hu Jintao, who was abruptly ushered out of a Communist Party Congress in late October.

The proceedings were led by Jiang's eldest son, Jiang Mianheng, who held a portrait of his father and received an embrace from Xi – in a rare show of emotion from the top leader.

Jiang's death has led to an outpouring of reminiscence on China's tightly controlled social media, with many mourning the former leader – and a bygone era when China was perceived to be freer and more open to the world.

Coming to power in the aftermath of the 1989 Tiananmen crackdown, Jiang led China out of international isolation and guided its integration into the global market. He presided over a decade of explosive economic growth, during which the party retreated from many aspects of private life and allowed some room for independent journalism, expression of dissent and a nascent civil society.

Under Xi, however, many of those freedoms have been squeezed. The party now dictates what people are allowed to watch, read, listen to and buy in their private lives to an extent unseen in decades.

But Jiang's decade in power was marred by the brutal enforcement of the now-scrapped one-child policy, harsh crackdown on the Falun Gong spiritual movement and rampant corruption. China's Great Firewall project of internet censorship was also started during Jiang's time in office.

"When you have no hope for the future, you'll revise the past into a paradise," said a widely circulated comment on Weibo, China's Twitter-like platform.

Still, experts say the wave of nostalgia for Jiang's era is a veiled criticism of the country's authoritarian turn under Xi.

"It's used as a contrast to the present. Because they can't criticize Xi," said Alfred Wu, an associate professor at the National University of Singapore's Lee Kuan Yew School of Public Policy.

On Tuesday, in his first public speech since the protests, Xi praised Jiang for ensuring the party's survival from the "political storms" of his time.

"In the late 1980s and early 1990s, serious political storms occurred at home and abroad, and world socialism experienced severe complications. Some Western countries imposed so-called 'sanctions' on China, and the development of our country's socialist cause faced unprecedented difficulties and pressure," Xi said in a reference to China's international isolation following the Tiananmen crackdown.

But Jiang led the party to adhere to reform and opening up, strengthen its ties with the people, enhance its ideological work, proactively engage in "diplomatic struggles" and upheld China's independence, dignity, security and stability, Xi said.

He cited Jiang's words – such as "We must have a heroic spirit that crushes all enemies" and "Men cannot bend our noble heads" – as a rallying call for the country to hold up its "struggle spirit."

"We should strengthen the ambition, backbone and confidence of the whole party, the whole country and all ethnic groups. We won't believe in heresies, be afraid of ghosts or succumb to pressure, and will overcome all difficulties and challenges on the journey ahead," Xi said.

NEW | 'There are no words': Laval daycare bus crash prompts outpouring of condolences on Parliament Hill

Condolences are pouring in on Parliament Hill after a Laval, Que., city bus crashed into a daycare on Wednesday morning, with federal politicians of all stripes expressing their sympathies with the families affected and gratitude to the first responders.

Health-care workers have new hand-washing guidelines. Here's how you can apply them

The way respiratory viruses have circulated this fall and winter, most Canadians could probably benefit from a hand-hygiene refresher. Here are the latest hand-washing best practices to apply in your daily life.

Killer whale mothers take care of their sons much longer than their daughters. This could be why

The sacrifices female killer whales make for their sons well after they are weaned is negatively affecting their reproductive health, according to new scientific research.

With hope of finding survivors fading, stretched rescue teams in Turkiye and Syria searched Wednesday for signs of life in the rubble of thousands of buildings toppled by the world's deadliest earthquake in more than a decade. The confirmed death toll approached 12,000.