QINGYUAN, China -- The campus emerges from the Chinese countryside like a theme park with castle-like buildings and sprawling grounds.This 300-acre kingdom was built in just 11 months and is dedicated solely to cultivating China’s soccer dream. 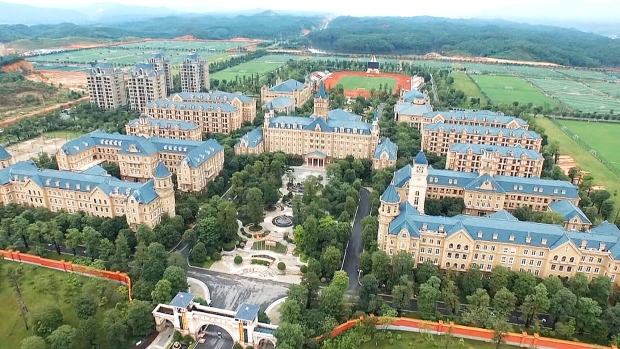 With 2,600 students including 100 girls and 24 Spanish coaches hired through a partnership with Real Madrid, Evergrande International is arguably the world’s largest soccer school. They train six days a week on 50 pitches that stretch as far as the eye can see.

“The place is amazing,” says coach Rafael Garcia Libran, “For me, it’s really a shock the way they do it. Professional clubs don’t have facilities like this.” 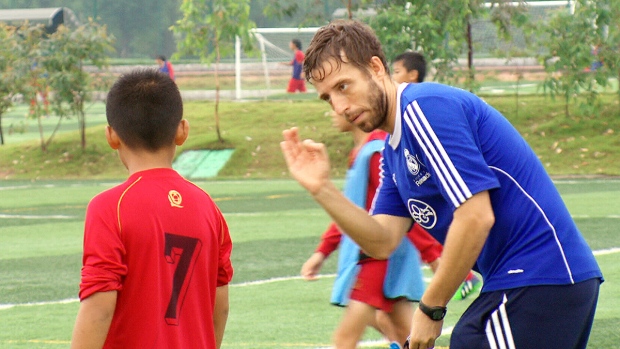 Evergrande International has hired 24 Spanish coaches through a partnership with Real Madrid.

The sport here is in need of a saviour. The track record of China’s national teams is fairly abysmal. Only once did China’s men’s team qualify for a World Cup and it did not score.

China's women's squad has fared better, having hosted tournaments in 1991 and 2007. In a dramatic upset, China lost the 1999 Women’s World Cup title to the United States after a scoreless match and extra time went to a penalty shootout.

Changing those fortunes is now a matter of national urgency. China’s president Xi Jinping, a soccer fan since childhood, once declared three wishes: for China to qualify for, host and eventually win a World Cup.

Last November the government announced that soccer would become a part of the national school curriculum. Its strategy will see playing fields and training programs in 20,000 Chinese schools. The goal? To grow 100,000 new players who can then commit themselves to pursuing soccer glory. 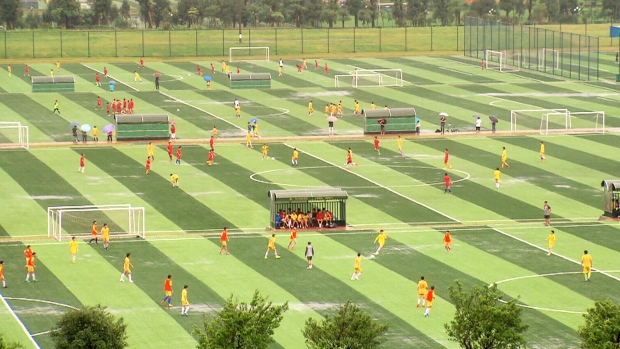 That duty now falls to players like Cai Jing. She is 13 years old and believes hard work will pay off.

“I love soccer because I can score and I like to win,” she says, then admits the sport has a long way to go in China so she hopes to train abroad. 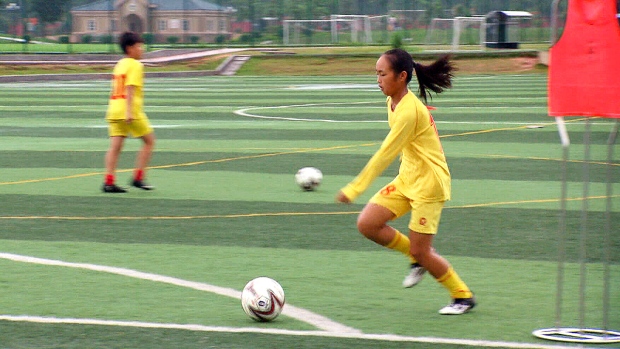 Cai Jing, 13, prepares to take a shot during a drill at Evergrande International in Qingyuan, China.

Students at Evergrande also take conventional classes like math and English. Next year soccer will be added as an option in the national university entrance exam as a means of convincing parents it is not a distraction from academics.

“It’s fun to play soccer with the foreign coaches,” says student Zhang Zhijie, “They grab their hair when they don’t play well!”

The school admits the greatest challenge is fostering a team sport mentality among the players in a country known for pushing individual athletes through factory-like training schools. 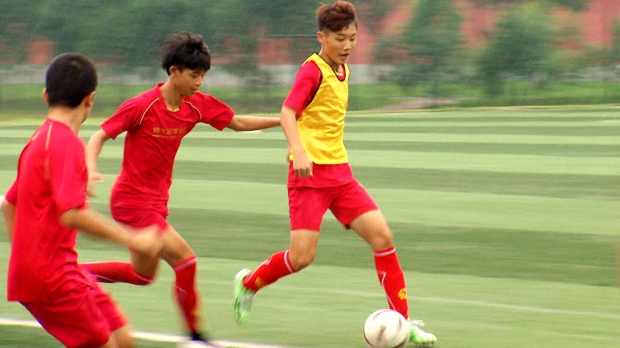 Students take part in a soccer drill at Evergrande International in Qingyuan, China.

Progress will take time. Not even China’s president has set a target date to realize his nation’s World Cup dreams.

In the meantime, a giant replica of the World Cup trophy stands at the entrance to Evergrande as motivation and a reminder of what is at stake.