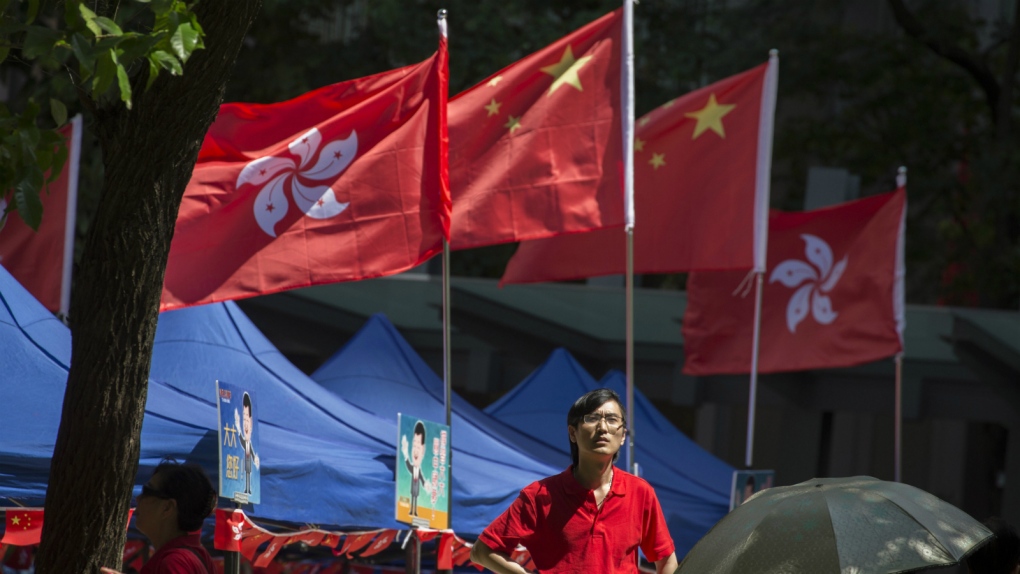 A man stands near Chinese and Hong Kong flags at an event to show support for the Chinese president's visit at a gathering in Hong Kong on Thursday, June 29, 2017. (AP / Ng Han Guan)

Pro-democracy activists staged protests ahead of his visit and more were expected, including an annual march through the streets on Saturday that has drawn big crowds in the past. Hong Kong authorities were taking no chances with disruptions and deployed heavy security across the city.

Helicopters hovered overhead and police and barricades lined the streets around a downtown convention centre and hotel complex where Xi was expected to spend most of his time. Authorities even glued the gaps between sidewalk paving stones, in an effort to prevent them from being torn up and thrown by protesters.

Xi is visiting to mark the 20th anniversary of Hong Kong's handover, when Britain ceded control of its colony to China at the stroke of midnight on June 30, 1997.

"It's been nine years since I last set foot in this place. I'm thrilled," Xi said on the airport tarmac. "Hong Kong has been tugging away at my heart," he said, adding that the anniversary of Hong Kong's "return to the motherland" on Saturday is "a big deal, a joyous occasion for the country and for Hong Kong."

He said one of the purposes of his trip is to plan for Hong Kong's future.

"We would like to look back at the 20 years of Hong Kong's extraordinary journey, learn from our experiences, and look forward to the future, to ensure the stable development of 'one country, two systems'," he said in brief remarks before speeding off in a motorcade without answering questions.

Under the "one country, two systems" principle, China took control of Hong Kong while promising to let it keep civil liberties like freedom of speech and considerable autonomy from the mainland for a 50-year period. But some recent incidents, most notably the secret detention of five Hong Kong booksellers on the mainland, have stoked fears that Beijing is eroding that principle.

Three pro-democracy activist groups said 26 of their members were arrested Wednesday evening on public nuisance charges for staging a sit-in at a giant flower sculpture near the complex. They were still being detained by the time Xi arrived, the groups said.

Those arrested included Joshua Wong, the young activist who helped lead 2014's "Umbrella Movement" protests, and Nathan Law, another student protest leader who was elected to the legislature last year.