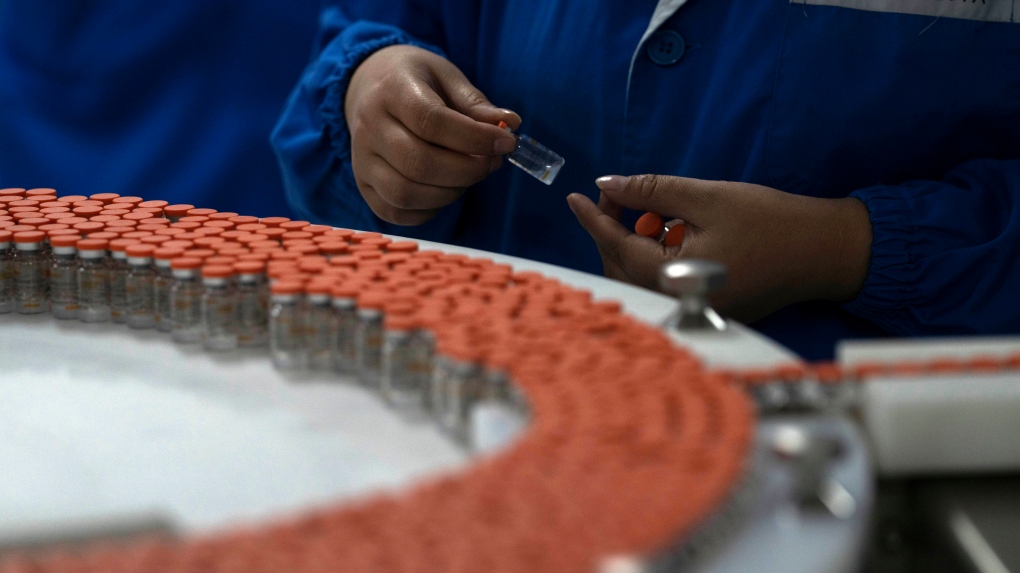 A worker inspects vials of SARS CoV-2 Vaccine for COVID-19 produced by SinoVac at its factory in Beijing on Thursday, Sept. 24, 2020. (AP Photo/Ng Han Guan)

BEIJING -- After the first shot, he had no reaction. But Kan Chai felt woozy following the second dose of a COVID-19 vaccine approved for emergency use in China.

"When I was driving on the road, I suddenly felt a bit dizzy, as if I was driving drunk," the popular writer and columnist recounted in a webinar earlier this month. "So I specially found a place to stop the car, rest a bit and then I felt better."

His is a rare account from the hundreds of thousands of people who have been given Chinese vaccines, before final regulatory approval for general use. It's an unusual move that raises ethical and safety questions, as companies and governments worldwide race to develop a vaccine that will stop the spread of the coronavirus.

Chinese companies earlier drew attention for giving the vaccine to their top executives and leading researchers before human trials to test their safety and efficacy had even begun. In recent months, they have injected a far larger number under an emergency use designation approved in June, and that number appears poised to rise.

A Chinese health official said Friday that China, which has largely eradicated the disease, needs to take steps to prevent it from coming back. But one outside expert questioned the need for emergency use when the virus is no longer spreading in the country where it was first detected.

It's unclear exactly who and how many people have been injected so far, but Chinese vaccine makers have offered some clues. State-owned Sinopharm subsidiary CNBG has given the vaccine to 350,000 people outside its clinical trials, which have about 40,000 people enrolled, a top CNBG executive said recently.

Another company, Sinovac Biotech Ltd., has injected 90% of its employees and family members, or about 3,000 people, most under the emergency-use provision, CEO Yin Weidong said. It has also provided tens of thousands of rounds of its CoronaVac to the Beijing city government.

Separately, the Chinese military has approved the use of a vaccine it developed with CanSino Biologics Inc., a biopharmaceutical company, in military personnel.

"The first people to have priority in emergency use are the vaccine researchers and the vaccine manufacturers because when the pandemic comes, if these people are infected then there's no way to produce the vaccine," Yin said.

Now, large Chinese firms including telecom giant Huawei and broadcaster Phoenix TV have announced they're working with Sinopharm to get the vaccine for their employees.

Several people who say they work in "front-line" organizations have said on social media that their workplaces have offered vaccinations for about 1,000 yuan ($150). They declined to comment, saying they would need permission from their organizations.

In an established but limited practice, experimental medications have been approved historically for use when they are still in the third and last phase of human trials. Chinese companies have four vaccines in phase 3 -- two from Sinopharm, and one each from Sinovac and CanSino.

The Chinese government referenced the World Health Organization's emergency-use principles to create its own through a strict process, National Health Commission official Zheng Zhongwei said at a news conference Friday.

He said there have been no serious side effects in the clinical trials.

"We've made it very clear that the COVID-19 vaccine we put into emergency use are safe," Zheng said. "Their safety can be ensured but their efficacy is yet to be determined."

Under the emergency rule, high-risk personnel such as medical and customs workers and those who have to work overseas are given priority access, he said. He declined to provide exact numbers.

But Diego Silva, a lecturer in bioethics at the University of Sydney, said that giving vaccines to hundreds of thousands outside of clinical trials doesn't have "scientific merit" in China, where there are currently very few locally transmitted cases, and incoming arrivals are quarantined centrally.

"If it's in the U.S. where the virus is still raging that's a bit different, but in a country like China it doesn't seem to make sense to me," he said. "Because there's not enough of the virus in China locally to deduce anything, you're introducing a whole host of others factors" by injecting people outside of trials.

Zheng said that all those injected under emergency use are being closely tracked for any adverse health effects.

Kan Chai, the columnist, wrote in an article posted online in September that despite initial hesitation, he decided to sign up after he heard a state-owned company was looking for volunteers.

He didn't say whether his was an emergency-use case, but the timing of his vaccination suggests it was. He took the first dose in late July, when the emergency inoculations were getting started and the trials were all but over.

"I'm willing to be a little white mouse, and the biggest reason is because I have trust in our country's vaccination technology," he said.

His real name is Li Yong, but his 1.65 million followers on the Twitter-like social platform Weibo know him better by his pen name, which means "10 years of chopping wood." He declined an interview request.

He described taking the vaccine in a public webinar hosted by 8am HealthInsight, a popular health media outlet. It's unclear why he qualified to receive it.

Scant information is publicly available about the program's scope, size, and scientific merit. CNBG and parent Sinopharm declined to comment. Zheng, the National Health Commission official, did not know about the Kan Chai case.

While emergency use may be the right path, Chinese companies are not being transparent about issues such as informed consent, said Joy Zhang, a professor who researches the ethical governance of emerging science at University of Kent in Britain.

Zhang said that she could not find any relevant information on the Sinopharm website, and aside from reports published in international medical journals, there is little else made public.

She said relatively more information is publicly available about other trials such as one run by Oxford University and AstraZeneca. The trial was halted after a participant developed severe neurological side effects, and only resumed after clinical data was submitted to an independent review board.

China has a troubled past with vaccines, with various scandals over the past two decades.

The most recent case was in 2018, when Changsheng Biotechnology Co. came under investigation for falsifying records and making ineffective rabies vaccines for children.

In 2017, Wuhan Institute of Biological Products Co., a CNBG subsidiary behind one of the vaccines in phase 3 trials, was found to have made defective diphtheria vaccines that were ineffective.

Public anger over the case prompted an overhaul of a vaccine punishment law in 2019. The country tightened supervision over the vaccine development and distribution process, and increased penalties for fabricating data.

Those concerns seem to be of the past. Guizhen Wu, the chief biosafety expert for China's Center for Disease Control, said a vaccine could be ready for the general public in China as early as November. She said she took an experimental vaccine back in April.

An overseas employee at a Chinese state-owned company, who spoke on condition of anonymity because she wasn't authorized to speak with the media, said she decided to sign up last week.

She said she isn't worried because a vaccine is a government priority, so authorities will keep a close watch on the process.