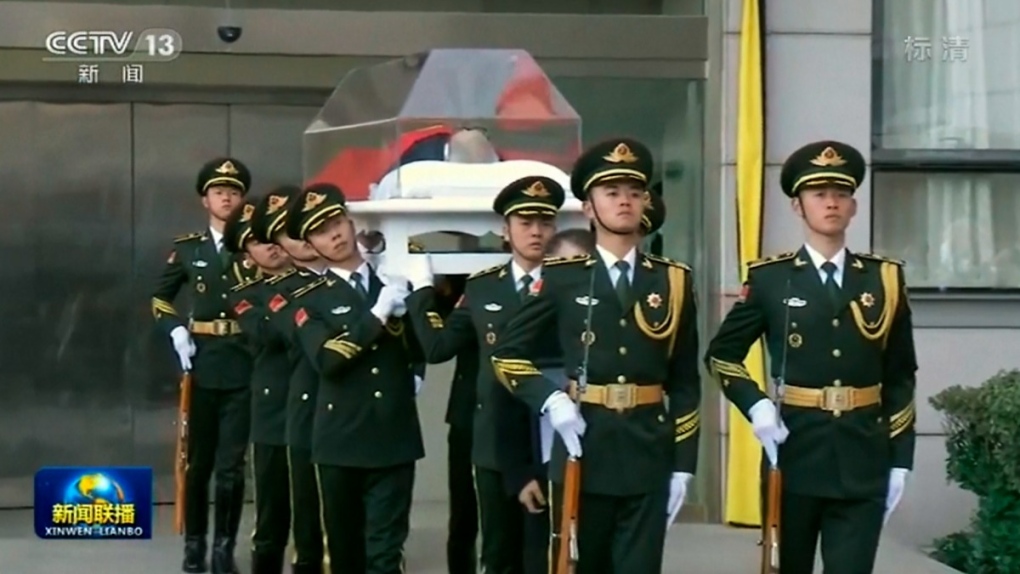 Honour guards carry the remains of former president Jiang Zemin at a military hospital in Beijing, China, on Dec. 5, 2022. (CCTV via AP)
BEIJING -

State broadcaster CCTV showed Xi, his predecessor Hu Jintao and others bowing to Jiang's body at a military hospital in Beijing. Jiang's body was then sent for cremation at Babaoshan cemetery, where many top leaders are interred.

A formal memorial service is scheduled for Tuesday at the Great Hall of the People, the seat of the ceremonial legislature in the centre of Beijing.

Jiang led China out of isolation after the army crushed student-led pro-democracy protests centered on Beijing's Tiananmen Square in 1989 and supported economic reforms that led to a decade of explosive growth.

A trained engineer and former head of China's largest city, Shanghai, Jiang was president for a decade until 2003 and led the ruling Communist Party for 13 years until 2002. After taking over from reformist leader Deng Xiaoping, he oversaw the return of Hong Kong from British rule in 1997 and Beijing's entry into the World Trade Organization in 2001.

The appearance by Hu was his first in public since Oct. 22, when he was unexpectedly guided off the stage during the closing ceremony of the national congress of the Communist Party.

No official explanation was given, and speculation over the incident has run from a health crisis to preventing an attempted protest by the 79-year-old former leader against Xi, who has eliminated terms limits on his position and appointed loyalists to all top positions.

Liberal member of Parliament and former cabinet minister Kirsty Duncan has announced that she is taking an immediate medical leave due to a 'physical health challenge.'