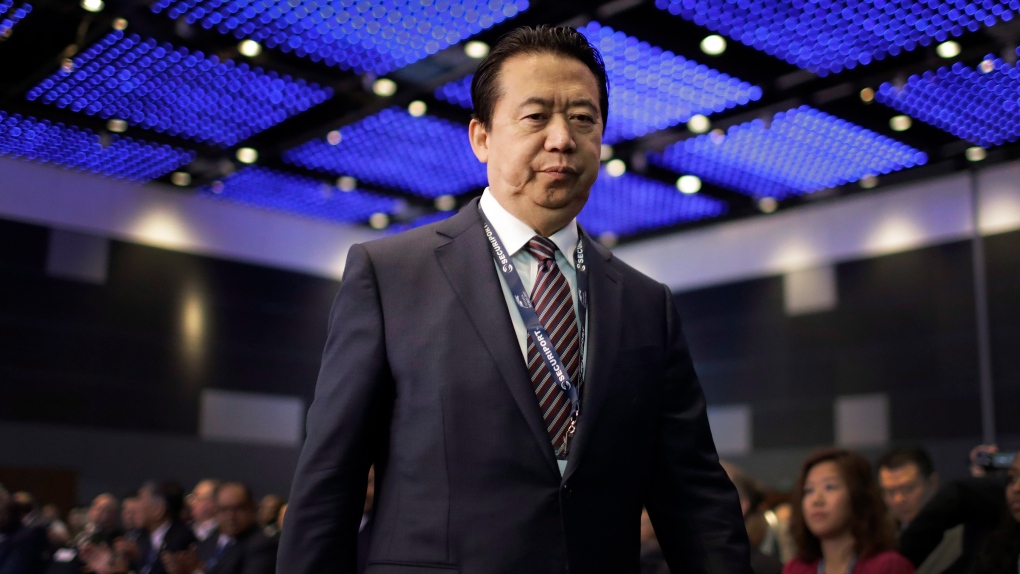 In this July 4, 2017 file photo, then-Interpol President, Meng Hongwei, walks toward the stage to deliver his opening address at the Interpol World congress in Singapore. (AP Photo/Wong Maye-E, File)

BEIJING -- Chinese prosecutors indicted former Interpol president Meng Hongwei on Friday on charges of accepting bribes, the latest development in a case that began with his disappearance while on a journey to Beijing.

The announcement from the prosecutor's office in the northeastern city of Tianjin said Meng had abused his positions, including as a vice minister of public security and head of the maritime police to "illegaly accept cash and property in return for performing favours for others."

"The amounts were especially huge," the statement said.

Meng was formally arrested last month after being expelled from public office and the party. While serving at Interpol, Meng retained his title as a vice minister of public security.

Elected president of the international police organization in 2016, Meng had his four-year term cut short when he disappeared into custody after travelling to China from the body's headquarters in France at the end of September. Interpol was not informed and was forced to make a formal request to China for information about Meng's whereabouts.

There are suspicions he had fallen out of political favour with Chinese President Xi Jinping, who has carried out a wide-ranging crackdown on corruption and perceived disloyalty that observers say is calculated to strengthen party control while bringing down potential challengers to his authority.

Meng's wife, Grace, said Friday that China has failed to provide a shred of evidence against her husband and accused Chinese authorities of creating a "fake case" against him for political reasons.

Speaking by phone to the AP, she again demanded that China provide proof that her husband is alive.

She has remained in France, where Meng was stationed for Interpol, with their two young sons.

This article has been corrected to show that Meng disappeared at the end of September instead of October.