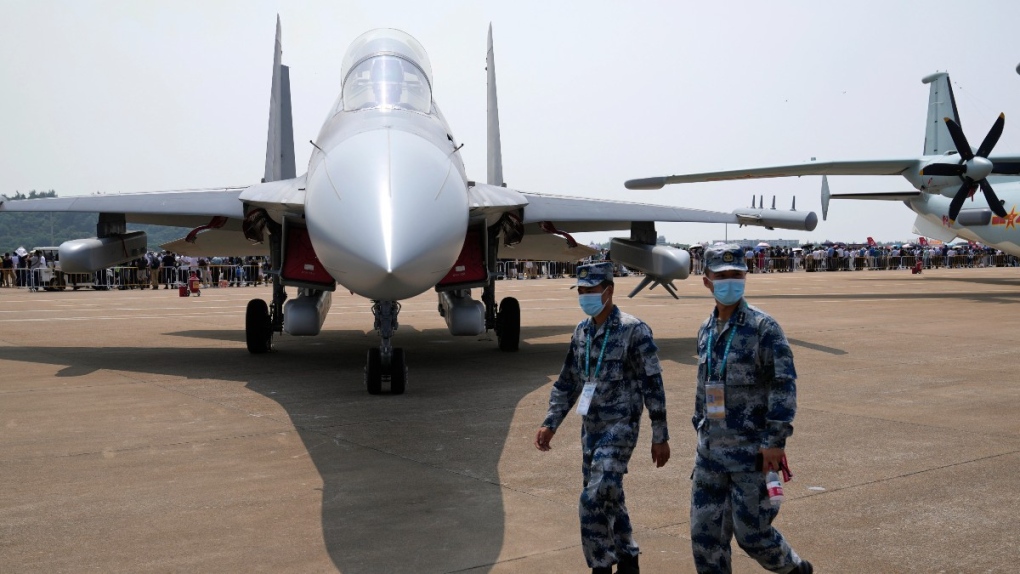 TAIPEI, TAIWAN -- China flew 56 fighter planes toward Taiwan on Monday in the largest show of force on record, continuing the three days of sustained military harassment against the self-ruled island.

The first sortie of 52 planes included 34 J-16 fighter jets and 12 H-6 bombers, among other aircraft, according to Taiwan's Ministry of National Defense. Later, four more Chinese J-16s flew toward the southwestern part of Taiwan's air defence identification zone -- a buffer outside a country's airspace.

The Taiwanese air force scrambled its fighter planes and monitored the movement of the Chinese warplanes on its air defence system, the ministry said.

China claims democratically ruled Taiwan as its own territory, to be brought under its control by force if necessary. It refuses to recognize the island's government and has increasingly sought to isolate the independence-leaning administration of President Tsai Ing-wen.

Experts have called the flights and other military maneuvers by Beijing gray zone warfare, or any type of military action short of direct combat. Many say they do not believe the display of force and aggressive rhetoric, much of which is repetitive, will lead to war.

"We are very concerned that China is going to launch a war against Taiwan at some point, even though the threat may not be imminent at this point," Taiwanese Foreign Minister Joseph Wu said in an interview with the Australian Broadcasting Corp. broadcast on Monday.

Taiwan and China split during a civil war in 1949, and Beijing opposes Taiwan's involvement in international organizations. Taiwan announced on Sept. 23 that it had applied join the Comprehensive and Progressive Agreement for Trans-Pacific Partnership, a week after China submitted its own application to join the trade pact.

Starting last Friday, on China's National Day, the People's Liberation Army sent 38 warplanes into the area and 39 aircraft on Saturday, previously the most in a single day since Taiwan began releasing reports on the flights in September 2020. China sent an additional 16 planes on Sunday.

The latest maneuvers by the Chinese air force bring the total to 814 flights.

In Washington on Monday, White House Press Secretary Jen Psaki said: "We remain concerned by the People's Republic of China's provocative military activity near Taiwan, which is destabilizing, risks miscalculations and undermines regional peace and stability. We urge Beijing to cease its military, diplomatic and economic pressure and coercion against Taiwan."

In response to a similar statement over the weekend from the U.S. State Department, China's Ministry of Foreign Affairs had said that the U.S. selling weapons to Taiwan as well as ships navigating the Taiwan Strait were "provocative action that harmed U.S-China relations."

The latest flights have come in separate groups with daytime and nighttime incursions. The nighttime flights are of note, analysts say, because they're more challenging due to reduced visibility.

"They have the kind of confidence to operate at night," said Chen-Yi Tu, a researcher at the Institute for National Defense and Security Research in Taiwan.