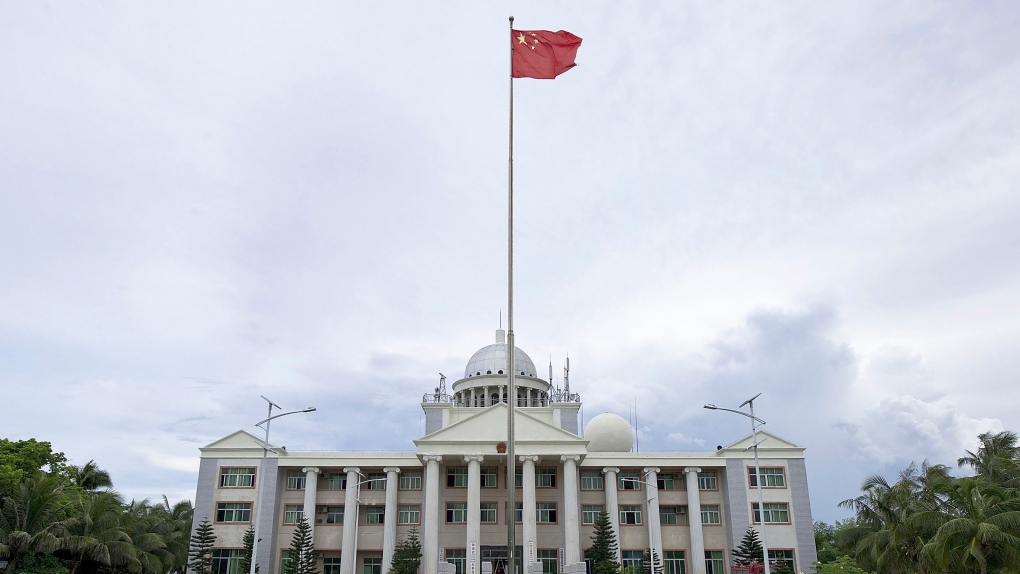 Chinese people chat in front of an administration office building for the Xisha, Nansha, Zhongsha islands on Yongxing Island, the government seat of Sansha City off the south China's Hainan province, on Saturday, July 21, 2012. (AP)

EIJING -- China's newest city is a tiny and remote island in the South China Sea, barely large enough to host a single airstrip. There is a post office, bank, supermarket and a hospital, but little else. Fresh water comes by freighter on a 13-hour journey from China's southernmost province.

Welcome to Sansha, China's expanding toehold in the world's most disputed waters, portions of which are also claimed by Vietnam, the Philippines and other neighbors. On Tuesday, as blustery island winds buffeted palm trees, a new mayor declared Sansha with a population of just 1,000 China's newest municipality.

Beijing has created the city administration to oversee not only the rugged outpost but hundreds of thousands of square kilometers (miles) of water, aiming to strengthen its control over disputed - and potentially oil-rich - islands.

A spokesman for the Philippines Foreign Ministry said Manila did not recognize the city or its jurisdiction. Vietnam said China's actions violated international law.

The city administration is on tiny Yongxing island, 350 kilometers (220 miles) southeast from China's tropical Hainan Island. The Cabinet approved Sansha last month to "consolidate administration" over the Paracel and Spratly island chains and the Macclesfield Bank, a large, completely submerged atoll that boasts rich fishing grounds that is also claimed by Taiwan and the Philippines.

Vietnam and China both claim the Paracels, of which Yongxing, little more than half the size of Manhattan's Central Park, is part. The two countries along with the Philippines, Malaysia, Brunei and Taiwan also claim all or parts of the Spratlys.

China claims virtually the entire South China Sea and its island groups, and its disputes occasionally erupt into open confrontation. The islands, many of them occupied by garrisons from the various claimants, sit amid some of the world's busiest commercial sea lanes, along with rich fishing grounds and potential oil and gas deposits. China has approved the formal establishment of a military garrison for Sansha, though specific details have yet to be released.

Mayor Xiao Jie trumpeted Sansha's important role in protecting China's sovereignty. He said the designation of Sansha as a new city was "a wise decision made by the party and the government of China to protect the sovereign rights of China, and to strengthen the protection and the development of natural resources."

Sansha means "three sandbanks" in Mandarin and appears to refer to the Chinese names for the disputed island chains and atoll, known in Chinese as the West, South and Middle Banks, or Xisha, Nansha and Zhongsha.

A description from a former People's Liberation Army officer who was among the officials overseeing the island before Sansha was established paints a picture of a harsh and isolated post where officials took turns staffing for a month at a time. Though, he said fishermen live there all year round.

"The living conditions are pretty simple," Tan Xiankun, director of the office in Hainan overseeing Xisha and other South China Sea territories, told The Associated Press in 2010. "It's very humid and hot, more than 30 degrees, and there's salt everywhere. There's no fresh water, except for what's shipped in and what's collected from rain water."

Philippines Department of Foreign Affairs spokesman Raul Hernandez said Manila has expressed its concern and registered a strong protest with Beijing over the decision to set up a military garrison on Sansha.

"The Philippines does not recognize the Sansha city and the extent of its jurisdiction and considers recent measures taken by China as unacceptable," Hernandez told a news conference.

Vietnam's Foreign Ministry spokesman Luong Thanh Nghi said in a statement that Vietnam had protested to the Chinese foreign ministry.

A report released Tuesday by the International Crisis Group think tank said that although China's large claim to the South China Sea and its assertive approach has rattled other claimants, Beijing is "not stoking tensions on its own."

"South East Asian claimants, with Vietnam and the Philippines in the forefront, are now more forcefully defending their claims - and enlisting outside allies - with considerable energy," it said, a reference to Washington's move to influence the Asian balance of power by supporting China's neighbors.

The report also warned that the risk of escalation was high and urged claimants to find ways to jointly manage energy resources and fishing areas while also agreeing on a mechanism for handling incidents.

"In the absence of such a mechanism, tensions in the South China Sea could all too easily be driven to irreversible levels," it said.