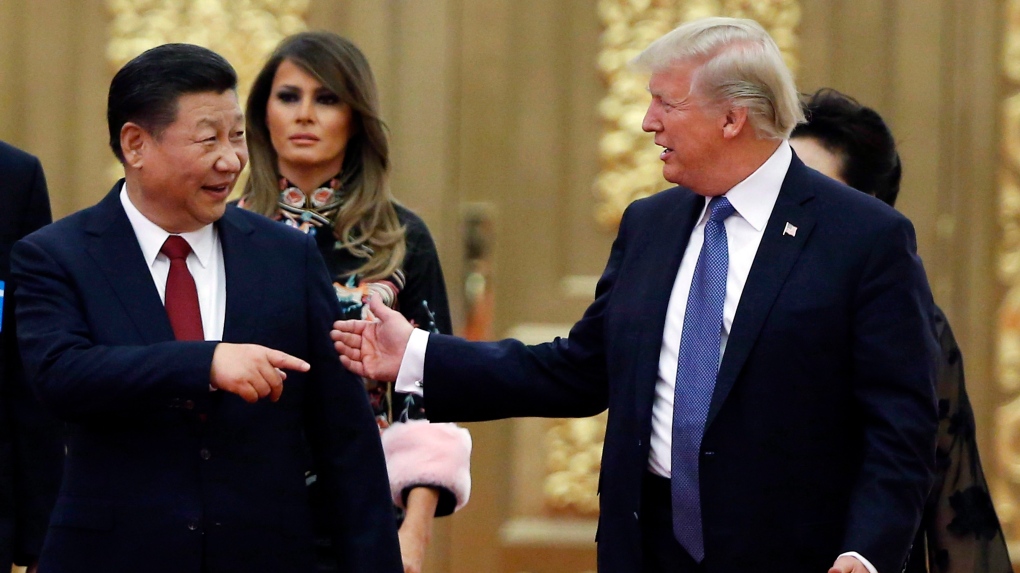 U.S. President Donald Trump China's President Xi Jinping arrive for the state dinner with the first ladies at the Great Hall of the People in Beijing, China on Nov. 9, 2017. (Thomas Peter/The Canadian Press/AP)

BEIJING -- China accused the United States on Friday of trying to "demonize and stigmatize" relations between the two countries, in a scathing attack on the Trump administration's designation of Chinese-funded language and culture programs in the U.S. as foreign missions of the Chinese Communist Party.

Foreign ministry spokesperson Zhao Lijian said branches of the Confucius Institute U.S. Center operating at U.S. schools and colleges are a "bridge and link to help people from all over the world learn Chinese, understand China, and strengthen educational and cultural exchanges and co-operation between China and other countries."

Zhao said the accusations against the institutes were without basis and were motivated by "ideological prejudice and self-interest."

"The relevant U.S. approach is to demonize and stigmatize the normal operation of China-U.S. co-operation projects. We strongly deplore and oppose it," Zhao said at a daily briefing. He said China would "reserve the right to make further responses to this matter."

The designation requires the Confucius Institute U.S. Center, based in Washington, to submit reports to the U.S. government about its funding, personnel, curriculum and other activities in the United States.

"We're not kicking them out. We're just highlighting the fact that these folks do work for the Ministry of Education of the (Chinese) Communist Party," Assistant Secretary of State for East Asia and Pacific Affairs David Stilwell said in making the announcement Thursday.

About 500 kindergarten through 12th grade classrooms are affiliated with the Confucius Institute in the U.S., Stilwell said. The institute also operates on 65 U.S. campuses, less than before because some universities have closed the programs over concerns they were spreading Chinese government propaganda and interfering in academic independence over issues such as Hong Kong and Tibet.

China has cast the institutes as its own version of language and culture centres operated by the U.S., France, Germany, Britain and other nations, but controversially has sought to embed them in schools rather than having them operate independently.

The designation is the latest in a series of Trump administration decisions against China as tensions between the two nations rise over trade, technology, human rights and the coronavirus, which was first reported in Wuhan, China.

Last month, the U.S. ordered the Chinese Consulate in Houston to close, prompting China to shutter the American Consulate in the southwestern city of Chengdu in a tit-for-tat action that some have heralded as a sign of a new Cold War between the two.

The U.S. has also added Chinese state media to the list of organizations that should be considered "foreign missions" because of their ties to the Chinese government and Communist Party. The U.S. subsequently cut the number of Chinese reporters allowed in the country, to which China responded by expelling American reporters in China.