A disabled Carnival cruise ship arrived at an Alabama port Thursday night, ending a five-day ordeal for more than 4,220 passengers and crew stuck on board.

A steady stream of passengers began disembarking soon after the ship docked, but the process was expected to take until the early morning hours, Carnival Cruise Lines Sr. Vice President Terry Thornton said.

Tug boats had been towing the vessel from the Gulf of Mexico since Tuesday after a fire broke out in one its ship's six engines on Sunday, knocking out its forward propulsion, as well as air conditioning and bathroom facilities.

There were no fatalities, but one person who was on dialysis had to be transferred to another cruise ship and taken to a medical facility for treatment. Also, the Coast Guard said in a statement Thursday that it evacuated a passenger who suffered a stroke.

Efforts to drag the disabled ship back to shore were delayed on Thursday when the towline snapped off the coast of Alabama. A new tugboat was sent to secure the vessel again and continue towing it to a port in Mobile, Ala.

Passengers had described the ship as filthy, largely due to problems with the bathrooms. According to reports only a handful of toilets were in operation.

Some passengers were so disgusted by the stench and heat on the lower decks that they slept on mattresses on the top deck despite the rain.

The cruise company disputed accounts that the ship was filthy, but as the ship docked Thursday, Thornton apologized to passengers.

He said passengers were being given the option of boarding a bus directly from Mobile to Galveston, Tx. or Houston -- roughly seven hours by bus -- or spending the night in a hotel in New Orleans, which is two hours away by bus.

Those staying in New Orleans would be flown Friday to Houston, the ship's starting point, at Carnival's expense.

Passengers are expected to get a full refund and discounts on future cruises, and Carnival announced Wednesday they would each get an additional $500 in compensation.

The ship left Texas on Feb. 7 for a four-day cruise, with 3,143 passengers and 1,086 crew members on board. After the engine room fire knocked out power to the vessel, the ship was left drifting in the waters about 240 kilometres off Mexico's Yucatan Peninsula.

Before the towline broke, the cruise ship was travelling about 8 km/h.

The National Transportation Safety Board is investigating the incident. 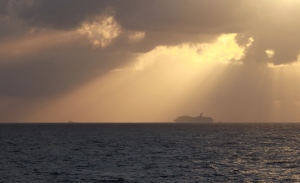