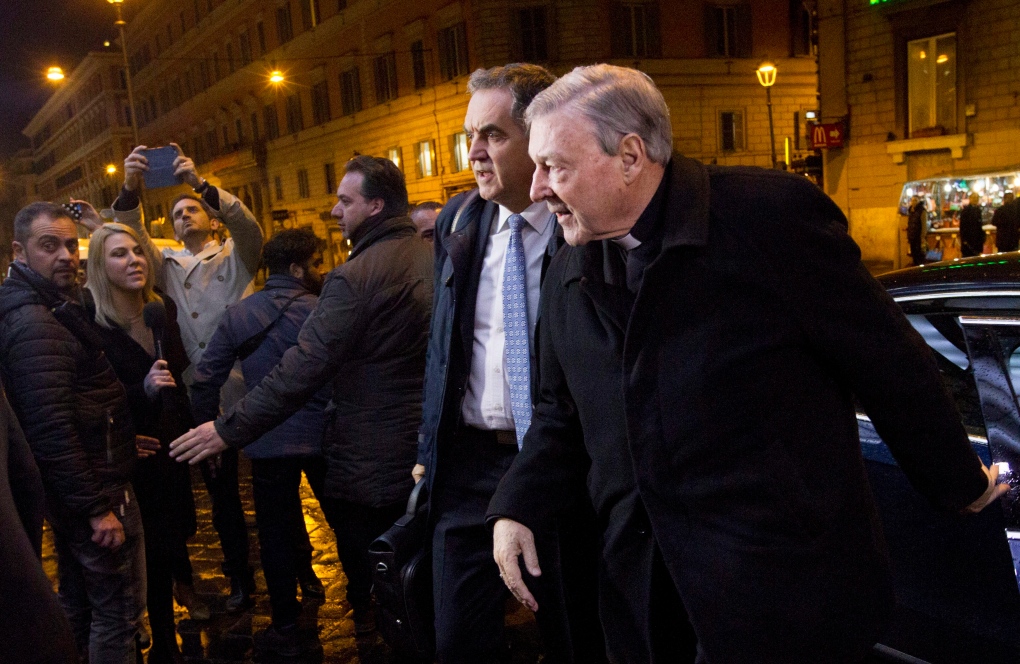 Australian Cardinal George Pell, right, arrives at the Quirinale hotel in Rome to testify via videolink from the hotel to the Royal Commission sitting in Sydney on Monday, Feb. 29, 2016. (AP / Riccardo De Luca)

CANBERRA, Australia - One of Pope Francis' top advisers on Wednesday denied accusations that he had concealed his own knowledge of two notorious pedophile priests, telling an Australian inquiry into child sex abuse that he had changed a culture of "crimes and coverups" within the Catholic Church.

Australian Cardinal George Pell has told the Royal Commission into Institutional Responses to Child Sexual Abuse this week that he was deceived twice by church authorities about child abuse allegations against priests Gerald Ridsdale and Peter Searson.

Pell said that as an assistant priest in the Australian city of Ballarat in the 1970s, Bishop Ronald Mulkearns had not told him that Ridsdale was repeatedly moved within the diocese because of pedophilia allegations.

Pell also said that as an auxiliary bishop in Melbourne in the early 1990s, the Catholic Education Office and Archbishop Frank Little had concealed from him accusations of pedophilia against Searson.

Pell's evidence that he was deceived by church authorities in both Ballarat and Melbourne was an "extraordinary position," Furness said.

"Counsel, this was an extraordinary world. A world of crimes and coverups and people did not want the status quo to be disturbed," Pell told the inquiry in Sydney via videolink from a Rome hotel.

"I not only disturbed the status quo, but when I became Archbishop, I turned the situation right around so that the Melbourne Response procedures were light years ahead of all this obfuscation and prevarication and deception," he added, referring a program he initiated in 1996 to pay compensation to clergy-abuse victims.

Furness accuses the 74-year-old cleric and the pope's chief financial adviser of denying knowledge about the pedophiles as an explanation for his lack of action.

The royal commission - which is Australia's highest form of investigation - is investigating how Pell dealt with abuse allegations as a priest, educator and adviser to Mulkearns, as well as how the Melbourne archdiocese responded to allegations of abuse, including when Pell served as auxiliary bishop.

Mulkearns is dying and is too ill to testify to the royal commission. Little died in 2008.

Ridsdale is in prison on convictions of abusing more than 50 children. The church substantiated four complaints of child sexual abuse against Searson, who died in 2009.

Pell said he accepted that there had been failure of process in handling complaints against Searson.

Pell said he was only "tangentially, marginally" responsible for that failure "because as an auxiliary you are not part of the official procedures."

"I regret that, even at this stage, I wasn't a bit more vigorous in my questioning or commenting," Pell said.

Wednesday was Pell's third day of testifying to the inquiry, which is investigating decades of abuse within churches and a variety of other organizations.

Two dozen Australian abuse victims and their companions travelled across the globe to witness Pell's testimony in a hotel conference room, a significant show of accountability in the church's long-running abuse saga.

The victims said Wednesday that they had requested a meeting with the pope before they return to Australia on Friday.