Canadian mining firm apologizes to protesters shot outside Guatemalan mine 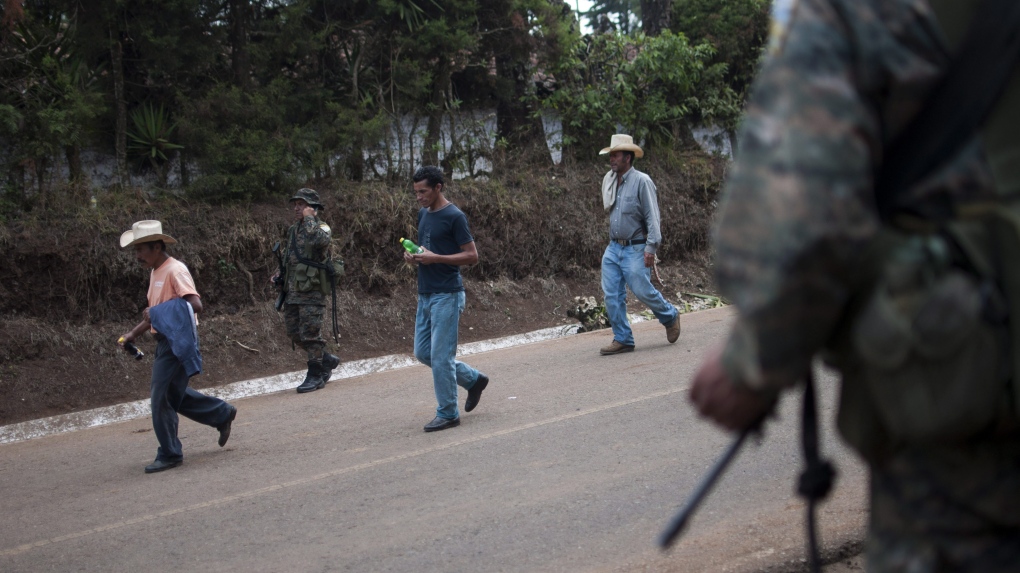 In this May 2, 2013 photo, residents walk past a cordon of soldiers standing guard at a checkpoint in San Rafael Las Flores, Guatemala, near a mine owned by Tahoe Resources Inc. (AP / Luis Soto)

A Canadian mining firm has apologized after reaching an agreement with demonstrators shot and wounded while protesting the company's Guatemalan gold and silver mine, according to statements Tuesday from both sides.

The agreement marks the first time that foreign complainants have received restitution for a human rights violation by a Canadian company in a Canadian court, the protesters' lawyers said in a statement.

This "landmark conclusion," the details of which are confidential, was made between a group of injured protesters, who sued the mining company Tahoe Resources Inc in British Columbia province in 2014, and the Pan American Silver Corp, which bought Tahoe in February.

The protesters' lawyers said a group had assembled at Tahoe's Escobal mine in southeastern Guatemala in April 2013 to demonstrate against the "lack of community consultation on the project" when mine security shot at the group in an effort to break up the gathering.

"Pan American, on behalf of Tahoe, apologizes to the victims and to the community," the statement said.

A 2017 decision by the British Columbia Court of Appeal meant the plaintiffs could have their civil case heard in Canada instead of Guatemala, because of the "real risk that the Guatemalan protesters would not get a fair trial in their own country," the statement from the plaintiffs' lawyers said.

The Supreme Court in Canada -- one of the world's major mining nations -- had then refused to hear a final appeal from Tahoe on that matter.

Both groups said the subject was now closed.

"Pan American strongly condemns and will not resort to the use of any violence. While these events occurred well before the acquisition, Pan American, on behalf of Tahoe, acknowledges that the shooting on April 27, 2013, infringed the human rights of the protesters," the company's statement said.

"This is an important victory for us and our community," said one of the plaintiffs, Luis Fernando Garcia, in his lawyers' statement.

"It vindicates our right to protest and to continue our resistance against mining operations in our community."