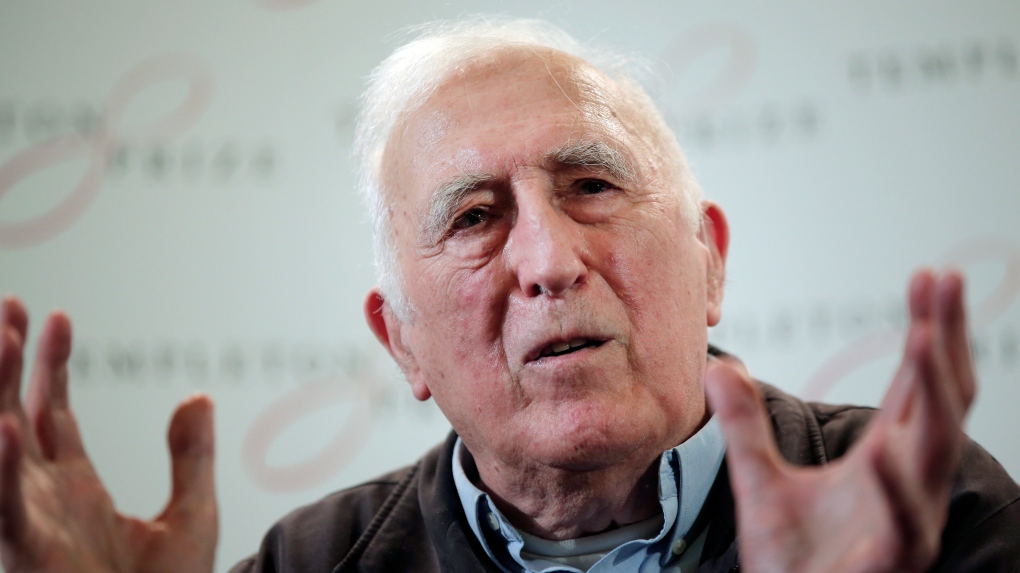 In this file photo dated Wednesday, March 11, 2015, showing Jean Vanier, the founder of L'ARCHE, an international network of communities where people with and without intellectual disabilities live and work together, in central London. (AP Photo/Lefteris Pitarakis, FILE)

PARIS -- A report by a French-based charity that helps people who are developmentally disabled has concluded its late Canadian founder had "manipulative sexual relationships" with women over several decades, shocking members of the group that continue his work today.

L'Arche International says in a report summary that Jean Vanier, who died last year at the age of 90, had relationships with at least six women between 1970 and 1995, some of whom said Vanier "used his power over them to take advantage of them through different kinds of sexual behaviours."

The report notes that none of the women were disabled. However, it said all described their vulnerability, sometimes coming from difficult family backgrounds or looking for a father figure, or seeking spiritual guidance.

"He said: 'This is not us, this is Mary and Jesus. You are chosen, you are special, this is secret,"' one of the unnamed victims said of Vanier's behaviour, according to the report.

The document also notes the women described significant barriers to raising concerns about the relationships, given Vanier's "charismatic personality" and his dominant position within L'Arche.

A visit to a psychiatric hospital prompted him to found L'Arche in 1964 as an alternative living environment where those with developmental disabilities could be full-fledged participants in the community instead of patients.

A Facebook post Saturday morning from L'Arche Daybreak, in Richmond Hill, Ont., which was the first of 29 Canadian communities of the charity, said the news out of France was troubling.

"We at L'Arche Daybreak are both shocked and saddened by the findings because this behaviour, as revealed in the report, betrays the fundamental values of our organization," the post said.

Jocelyn Girard, a former official from two L'Arche communities who met Vanier several times in France and in Quebec, between 1998 and 2010, hoped the news would not deprive the communities of precious funding.

He said people and assistants who have been transformed for the rest of their lives will now have to assume that it is not Vanier who transformed them, but the people with disabilities themselves who lived in the communities.

Worldwide, there are 154 L'Arche residential communities in 38 countries on five continents.

Vanier was born in Geneva, Switzerland, the fourth of five children. He was named to the Order of Canada and France's Legion of Honour.

The report explained the investigation was launched following another probe that began in 2014 into allegations of sexual abuse by Father Thomas Philippe, a Catholic priest Vanier called his "spiritual father," who died in 1993.

The report said that in 2016, L'Arche leaders received an allegation from a woman about Vanier dating back to the 1970s. It said Vanier acknowledged the relationship, but stated that he believed the relationship to have been "reciprocal."

In March 2019 towards the end of Vanier's life, the report said L'Arche International received another similar allegation and decided to launch an independent inquiry, which was conducted by independent British firm GCPS Consulting. It also looked into Vanier's relationship with Philippe, as well as Vanier's response to situations of abuse that were brought to his attention.

"The inquiry team found that the alleged victims, who were not linked to each other and had no knowledge of their respective stories, had each undergone a process of serious personal reflection," the report noted.

"Although deeply affected by the events of the past, they were both humble and without any hatred or desire for revenge."

"We honour the courage of the victims who came forward and stand in solidarity with them and with all victims of abuse," the Ontario group said in the post.

"In the midst of this darkness, we find a ray of light in those who so faithfully serve in L'Arche communities worldwide and have dedicated their lives to friendship, care and love," Collins said.