Can Amy Klobuchar pull off a last-minute surge in Iowa? 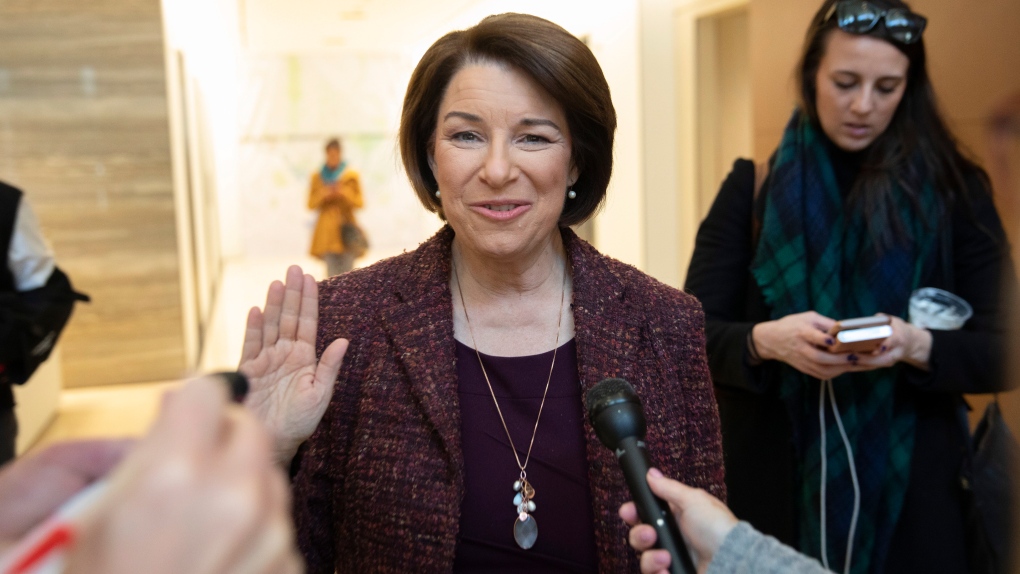 Democratic presidential candidate Sen. Amy Klobuchar, D-Minn., speaks to member of the media before heading back to the Capitol for the impeachment trial of President Donald Trump, Wednesday, Jan. 22, 2020 in Washington. (AP Photo/Pablo Martinez Monsivais)

STANTON, IOWA -- It was the kind of event designed to play up the Midwestern sensibilities that Amy Klobuchar so often talks about on the campaign trail. In a small rural Iowa community, voters gathered in a neighbour's home. They ate tater tot hot dish -- Klobuchar's award-winning recipe -- and listened to the case for the Minnesota senator to be Democrats' nominee for president.

The only thing missing was the candidate, who was stuck in the Senate chamber some 1,100 miles away for the start of U.S. President Donald Trump's impeachment trial. Instead, her potential supporters at Tuesday night's house party got a pitch from the senator's 24-year-old daughter.

"She actually has a record of winning in places Trump has won," said Abigail Bessler, delivering Klobuchar's well-worn lines. "When I talk to voters in New Hampshire, when I talk to people here ... it's just `Is she going to be able to beat Donald Trump?' They want a candidate who is going to win, and I think she has the best record for proving that."

The impeachment trial that got underway this week is happening at an inopportune time for all four of the senators in the Democratic primary. Just as voters in the nation's leadoff caucus state are finalizing their decisions ahead of the Feb. 3 caucuses, Sens. Elizabeth Warren, Bernie Sanders, Michael Bennet and Klobuchar are stuck in their seats in Washington.

But it's a particularly bad moment for Klobuchar. The three-term senator built her campaign on a strategy of a slow and steady build in Iowa. She spent campaign funds conservatively all year, hoping to be able to capitalize on a late surge just before the caucuses. A strong showing in Iowa, her campaign hopes, will catapult her into the top tier in New Hampshire and beyond. Now her absence could blunt the gains from what Klobuchar described Wednesday as "quite a 48 hours."

In recent days Klobuchar earned endorsements from The New York Times, which also endorsed Warren, and the Quad-City Times, one of Iowa's largest newspapers. On Tuesday, she got the backing of a state senator who is a leading advocate for action on climate change, and two other state lawmakers who previously supported Sen. Cory Booker and former Rep. Beto O'Rourke, who have dropped out of the 2020 race. She picked up 14 more local endorsers on Wednesday, including two well-known Iowa Democratic activists who were previously with Sen. Kamala Harris, who quit the race last year.

But Klobuchar is running out of time to gain ground on the four front-runners -- Warren, Sanders, former Vice-President Joe Biden and former South Bend, Indiana, Mayor Pete Buttigieg. Those candidates also have surrogates on the trail, including some big-name performers and nationally known politicians. Actress Mandy Moore was in Iowa for Buttigieg, and actress and activist Ashley Judd will stump with Warren on Sunday. Sanders is bringing in Rep. Alexandria Ocasio-Cortez and musical acts Bon Iver and Vampire Weekend.

Klobuchar says that the breadth of her support shows she can bring together people from all political leanings and that the roster of well-known local supporters will provide crucial credibility and organizing support in her absence.

"I just have to hope that that kind of grassroots campaigning is going to last," she said. "It's not something where you just bring in one celebrity. It is built to last."

For some Iowans, there is no substitute for personal contact with the candidate.

Iowa state Sen. Rob Hogg met with almost every presidential candidate to discuss their plans to address climate change before endorsing Klobuchar on Tuesday. He said he was sold on her record of attracting both progressive Democrats and independents, and is drawn to her pragmatic approach.

Hogg said that since making his announcement, he's heard from several people who said they were reaching the same conclusion he did, many of whom have waited longer than usual to make a decision this election cycle.

"I think a lot of Iowans have been slow to decide because there are so many candidates," Hogg said. That makes the impeachment trial "bad for all of (the senators)."

"I think that it's a challenge because there is nothing like seeing a candidate in person when you're making up your mind," he said.

Klobuchar, 59, is running as a pragmatic progressive who can win over liberal and moderate Democrats as well as independents and some Republicans. She's looking to pick up voters who backed other candidates, such as Booker and Harris, and convince moderates who may see Biden as too old and Buttigieg as too inexperienced that she's what they're looking for.

But after banking much of her campaign on Iowa, Klobuchar is still polling in fifth place there, with significant ground to make up if she's going to knock out any of the top four and become the surprise of caucus night. The campaign believes a fourth-place finish would put her on strong footing heading into New Hampshire, where she also has invested significant money and time and has been seeing larger crowds than what she's getting in Iowa.

From there the electoral calendar gets much tougher. Klobuchar's campaign got a late start in Nevada and South Carolina, and her low polling among black voters could be a big liability in South Carolina, where African Americans make up roughly two-thirds of Democratic primary voters. She also has far less money in her campaign fund than her rivals do, which could make it difficult to compete in the "Super Tuesday" contests in places like California and Texas on March 3 -- if she makes it that far.

But first she must perform in Iowa, where Klobuchar's campaign says even a fifth-place finish would be notable for a candidate who's already outlasted other candidates, such as Harris, who were seen early on as having a much better shot. On Wednesday night, almost 12,000 Iowa voters participated in a telephone town hall with the senator, who was in Washington. Klobuchar is scheduled to be back in the state Sunday for three town halls.

For some voters, her absence this week doesn't matter. Chris Nelson, a 71-year-old farmer from Stanton, Iowa, who attended Tuesday night's gathering at his neighbour's home, said Bessler was "a joy."

Nelson was with Sanders in 2016 and likely will be again this year. But he said he's been impressed with Klobuchar, who he says shares farmers' values of working hard and keeping your word. After hearing Bessler speak on Klobuchar's behalf, Nelson said he will likely caucus first for Sanders this time and support Klobuchar if Sanders doesn't have enough voters on caucus night to reach "viability," or a 15% threshold required to receive delegates.

And supporters say they're seeing firsthand that interest in Klobuchar is growing. Vicky Rossander, a retired teacher who opened her home for Tuesday's house party and will be a precinct captain for Klobuchar on caucus night, said several people mentioned The New York Times endorsement at a county Democratic meeting earlier this week.

"People were saying - `Wow, maybe we need to relook at her."'

Burnett reported from Chicago. Associated Press writer Will Weissert contributed to this report from Washington.