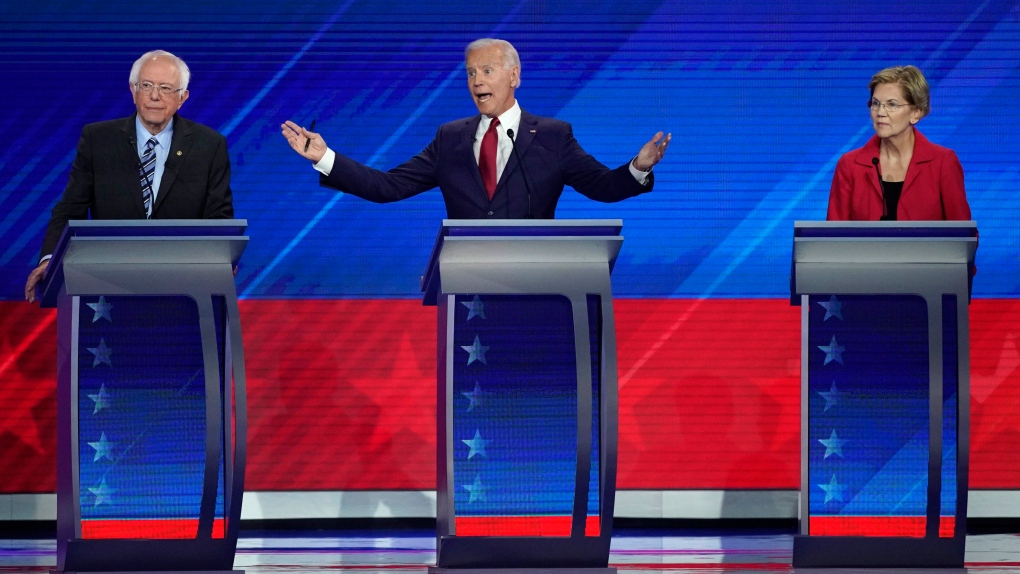 WASHINGTON -- WASHINGTON -- The smouldering political flareup between Elizabeth Warren and Bernie Sanders has rekindled debate over a question that has been gnawing at Democratic primary voters for more than three years: Can a woman beat U.S. President Donald Trump?

Many voters openly support the idea of the first female president but quietly worry that inherent gender biases could make an election victory difficult after Democrat Hillary Clinton's defeat in 2016. The issue has left many questioning whether advancing the cause of electing a woman to the White House is more important than betting on a male candidate seen as having a better shot of prevailing in 2020.

The question is especially challenging for female candidates, who say that acknowledging their tougher political road could make them seem weak but that ignoring it means refusing to accept reality. Of the six women who entered the 2020 presidential race, only Warren is polling among the top tier. She's clustered together in many polls with Sanders, a Vermont senator, former Vice-President Joe Biden and Pete Buttigieg, the former mayor of South Bend, Indiana.

Democratic strategist Adrienne Elrod, a senior adviser to Clinton's 2016 campaign, said Clinton's team entered the race "naively" thinking gender bias wouldn't be an issue in a country that already had elected its first black president and that had an accomplished female candidate who had already been a senator and secretary of state. They quickly learned otherwise.

"A lot of little things added up to, there's still a perception -- a misperception -- that a woman cannot be elected president," Elrod said.

That idea "is just not true," she added, noting that while Trump won the Electoral College, Clinton won the popular vote by nearly 3 million votes. Meanwhile, it is "not even up for debate" that a woman must be on the Democratic ticket this cycle if a male candidate wins the nomination, she said.

Warren, a Massachusetts senator, has for months largely sidestepped questions about gender but now might no longer be able to. She said Monday that during a private 2018 meeting with Sanders, he suggested a woman couldn't win the White House.

Sanders has forcefully denied saying that, and his campaign initially accused Warren's team of deliberately leaking a lie. Still, Sanders' top adviser, Jeff Weaver, eventually tried to chalk the matter up to a he-said, she-said, saying that "wires got crossed."

Attempting to defuse the situation could be beneficial to both sides since Warren and Sanders are friends who steadfastly avoided conflict until now -- and are proud progressives who are competing for the Democratic Party's most liberal wing. Any prolonged fight could end up hurting both of them.

It led to some testiness during Tuesday night's presidential debate in Iowa, with the state's lead-off caucuses now three weeks away. But the exchange lasted only a few minutes. Asked about Warren's account of the meeting, Sanders said, " As a matter of fact, I didn't say it," and added, "Of course a woman can win, but the real question is how do we beat Trump?"

Warren responded, " Bernie is my friend and I'm not here to try and fight with Bernie." She then drew sustained applause by noting that the male candidates on stage had lost elections while she and the only other woman participating, Sen. Amy Klobuchar, have not.

"We need a candidate who will excite all parts of the Democratic Party," she said.

Meanwhile, n either Warren or Sanders can afford to alienate women, who will play an outsize role in the 2020 Democratic primary. Sanders' 2016 presidential campaign faced accusations by female staffers that they experienced unwanted sexual advances by male staffers as well as pay inequity -- two issues they felt Sanders did not take seriously enough at the time. Sanders has since apologized, and his 2020 campaign has taken steps to report and punish misbehaviour.

"Bernie is the best feminist in this race," said RoseAnn DeMoro, the former executive director of National Nurses United and a Sanders confidante. "We'll see if Warren uses her newfound feminism to go after Joe Biden."

DeMoro wasn't ready to let go of the controversy, accusing Warren of "trying to hurt Bernie Sanders" because her account of the meeting "didn't happen." Recent polling shows that Sanders' support may be on the rise in the early states of Iowa and New Hampshire, while Warren's support has levelled off after a peak in the fall. No clear leader has emerged in either state.

Elrod believes there is an upside for Warren in motivating her supporters, and she said Sanders -- who can come across as "gruff" -- will have to be careful with how he addresses the issue.

"This is not what he wants to be talking about," Elrod said.

Trump's 2016 election sparked a new level of activism among women, who marched by the millions and ran for -- and won -- elections in record numbers. Female voters who abandoned Trump's Republican Party, particularly in suburban areas, also fueled Democratic gains in longtime red places.

Still, second-guessing by some Democrats about who can defeat Trump, and the memory of Clinton's 2016 loss, created challenges for the women who sought the party's nomination in record numbers.

New York Sen. Kirsten Gillibrand embraced her role as a mom and crusader in the .MeToo era -- only to see her presidential bid cut short in part over resentment from her role as the first Democratic colleague of Sen. Al Franken to call for his resignation amid accusations of sexual misconduct.

Sara Nelson, president of the Association of Flight Attendants, said that she, like many Americans, faces sexism in her job every day and that it is an issue that the presidential race can't ignore.

"Where better to raise those issues of concern than with people who actually are open to people making change?" Nelson said. "So having the debate about sexism in our country, in our politics, in our experience -- among people who want to eradicate it -- is not a bad thing."

Like Warren, Klobuchar at first avoided speaking openly on gender in the 2020 presidential race, but has more recently talked about it while campaigning. During a presidential debate in November, she noted Buttigieg's relative inexperience by saying: "Women are held to a higher standard. Otherwise we could play a game called `Name Your Favorite Woman President,' which we can't do because it has all been men."

A national Fox News poll from September found about half of likely Democratic primary voters said they thought Democrats would have a tougher time defeating Trump if the party nominates a woman. About as many said the same of a candidate with strongly liberal views, or one who is gay, like Buttigieg.

Fewer thought a person of colour (about 4 in 10) or someone over 70 years old (roughly a third) would have a hard time. Of the four Democratic front-runners, Buttigieg is the only one under 70.

Still, Americans do think it's probable that a woman will be elected president in the next 30 years: 30% say this will definitely happen, and 56% think it will probably happen, according to a Pew Research Center survey in December 2018. Just 13% think it probably or definitely won't happen.