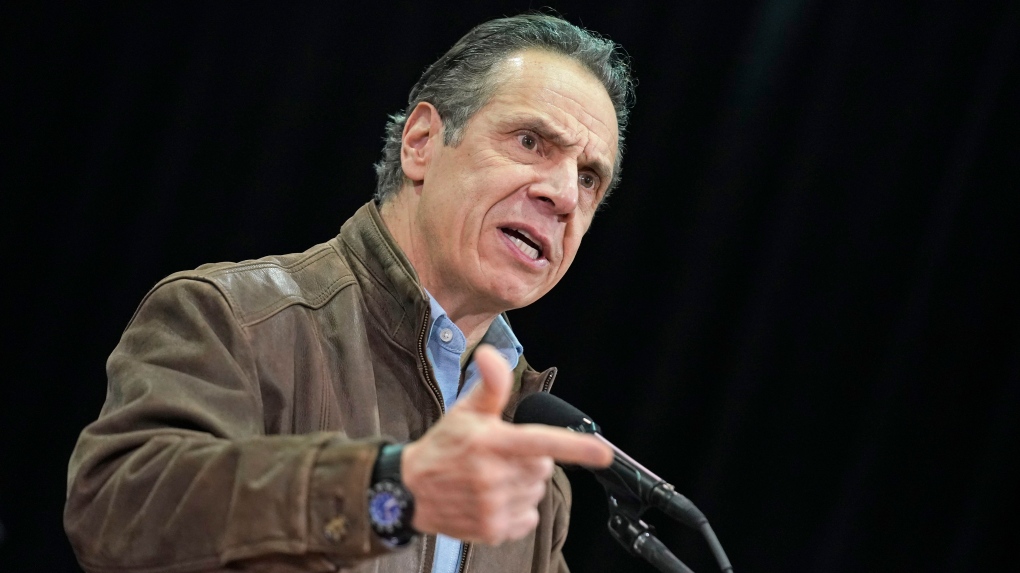 NEW YORK -- Calls for New York Gov. Andrew Cuomo's resignation intensified late Monday after a third woman accused him of offensive behaviour, saying he'd touched her face and back and asked to kiss her moments after they met at a wedding reception.

Anna Ruch told The New York Times late Monday that she removed the Democratic governor's hand from her back, but he said she seemed "aggressive," promptly put his hands on her face and asked if he could kiss her.

"I was so confused and shocked and embarrassed," Ruch, now 33, told the Times, which published a photo of the encounter showing the governor's hands on her face. "I turned my head away and didn't have words in that moment."

An email seeking comment was sent to Ruch's photography business. Her social media accounts were private. An email was also sent to Cuomo's administration for comment.

The account from Ruch, who worked as a photographer at the White House during President Barack Obama's second term, made her the second woman to accuse Cuomo of touching her without permission, and fueled broader calls for Cuomo to step down, including from some in his own party.

The latest accusation follows sexual harassment allegations against the governor from two women who had worked for his administration, accounts that led New York's independently elected attorney general to say she was moving ahead with an investigation of his conduct.

Attorney General Letitia James received a letter Monday from Cuomo's office authorizing her to take charge of the probe after a weekend of wrangling over who should investigate.

The letter enables James, also a Democrat, to deputize an outside law firm to conduct an inquiry with full subpoena power. The findings will be disclosed in a public report, the letter said.

Cuomo has maintained he had never inappropriately touched or propositioned anyone.

The former aide, Charlotte Bennett, rejected Cuomo's attempted apology in which he excused his behaviour as "playful," saying Monday that the governor has "refused to acknowledge or take responsibility for his predatory behaviour."

Bennett, who alleges Cuomo quizzed her about her sex life and asked whether she would be open to a relationship with an older man, tweeted that "abusers -- particularly those with tremendous amounts of power -- are often repeat offenders who engage in manipulative tactics to diminish allegations, blame victims, deny wrongdoing and escape consequences."

After news of Ruch's account broke, Bennett tweeted to her: "His inappropriate and aggressive behaviour cannot be justified or normalized. Thank you for your courage and strength."

Cuomo's support has plummeted amid dual crises. The harassment allegations come on the heels of accusations he covered up the true death toll of coronavirus on nursing home residents.

It's quite a tumble for Cuomo, who had been widely celebrated for his leadership during the pandemic, particularly the daily news conferences where he sought to inform and reassure the public with charts, graphs and a machismo he dubbed "New York tough."

Mayor Bill de Blasio and other elected officials have said that while Cuomo is under investigation, he should cede emergency powers he's held since the pandemic began, nearly a year ago. The Legislature hasn't taken any steps to revoke Cuomo's emergency powers -- set to expire April 30 -- despite a push from Republicans and some Democrats.

On Monday, Cuomo retained Manhattan litigator Elkan Abramowitz to represent him and his office in probes related to nursing homes.

Abramowitz, who previously represented Cuomo's office in a federal investigation into his 2014 decision to shutdown a state anti-corruption commission, said he is not representing Cuomo in the sexual harassment matter.

Bennett, 25, came forward with her allegations in a story published Saturday in the Times. She said Cuomo told her he was lonely and looking for a girlfriend.

Cuomo did not respond to Bennett's statement Monday.

Former aide Lindsey Boylan said Cuomo made inappropriate comments about her appearance, kissed her without her consent at the end of a meeting and once suggested they play strip poker while aboard his state-owned jet. Boylan, who is running for Manhattan borough president, first accused Cuomo in a tweet last December and elaborated on the allegations in a Medium post last week.

She tweeted Monday about Ruch's experience with the governor, saying, "This doesn't make me feel validated. It makes me feel sick."

Cuomo has denied Boylan's allegations. In a statement Sunday, he acknowledged that he had teased people about their personal lives in an attempt to be "playful" and funny. He said he had wanted to act like a mentor to Bennett.

"I now understand that my interactions may have been insensitive or too personal and that some of my comments, given my position, made others feel in ways I never intended. I acknowledge some of the things I have said have been misinterpreted as an unwanted flirtation. To the extent anyone felt that way, I am truly sorry about that," he said.

Cuomo's statement drew immediate backlash from critics who said he was throwing responsibility onto the women by saying they perceived his statements wrongly.

The letter authorizing James' investigation said that all state employees have been directed to co-operate fully with the review. Cuomo senior adviser Beth Garvey said she would facilitate interviews with witness and requests for documents from Cuomo's office.

Ross Garber, a lawyer who has represented former governors Mark Sanford of South Carolina and John Rowland of Connecticut, said Cuomo is "essentially handing his reputation to an outsider and saying, 'Have at it. Go find whatever you want and publish a report to the public about whatever it is you've concluded that I've done or not done."'

"He was not acting as a mentor and his remarks were not misunderstood by Ms. Bennett," Katz said. "He was abusing his power over her for sex. This is textbook sexual harassment."

Initially, Cuomo appeared wanting to retain a level of control over the investigation. His office said it was asking a former federal judge, Barbara Jones, to conduct the probe. Then, his office suggested that the attorney general and the state's top judge work together to appoint outside counsel.

Finally, on Sunday, Cuomo acquiesced to James' demands that she take control.