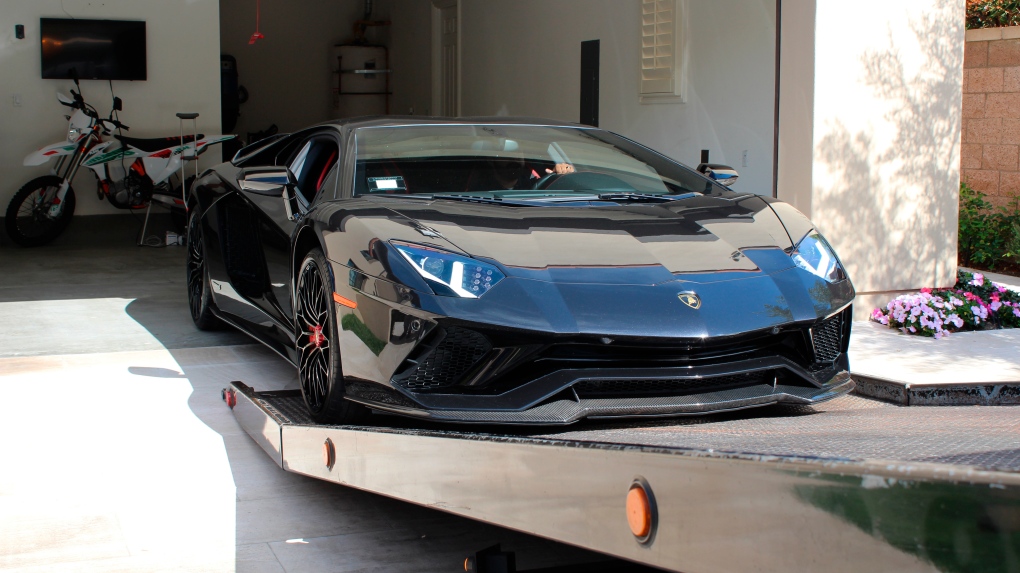 This photo provided by U.S. Immigration and Customs Enforcement shows a special agent with HSI Los Angeles's El Camino Real Financial Crimes Task Force seize a Lamborghini from an Orange County businessman on Thursday, April 6, 2021, in Irvine, Calif. Mustafa Qadiri, 38, of Irvine, was named in a federal grand jury indictment and has pleaded not guilty to charges he obtained $5 million in federal coronavirus-relief loans for phony businesses and then used the money for lavish vacations and to buy a Ferrari, Bentley and Lamborghini, prosecutors said Monday, May 10. (U.S. Immigration and Customs Enforcement via AP)

IRVINE, CALIF. -- A Southern California man has pleaded not guilty to charges he obtained US$5 million in federal coronavirus-relief loans for phoney businesses and then used the money for lavish vacations and to buy a Ferrari, Bentley and Lamborghini, prosecutors said Monday.

Mustafa Qadiri, 38, was arrested last week on suspicion of scheming to defraud the Paycheck Protection Program, which was implemented last year to help small businesses struggling during the COVID-19 pandemic.

Qadiri also used someone else's name, Social Security number and signature to fraudulently apply for one of the loans, prosecutors said.

He received US$5 million in loans that investigators said he used to pay for trips, sports cars and personal expenses.

Federal agents have seized the Ferrari, Bentley and Lamborghini cars that Qadiri purchased, along with about US$2 million from his bank accounts, prosecutors said.