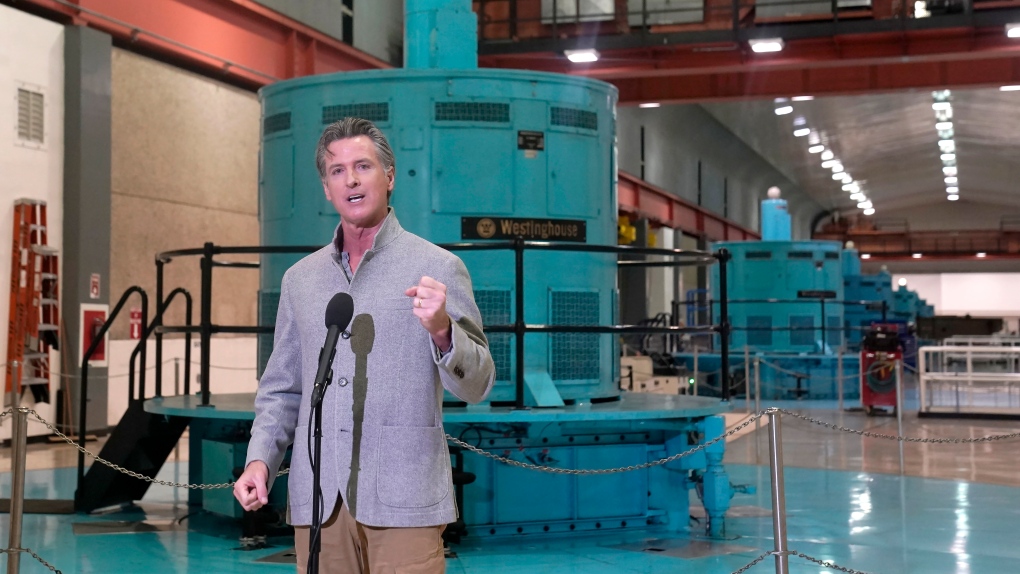 A draft bill obtained by The Associated Press said the plan would allow the plant to continue operating beyond a scheduled closing by 2025.

The draft proposal also includes a possible loan for operator Pacific Gas & Electric for up to $1.4 billion.

The proposal was confirmed by Newsom spokesman Anthony York. The bill says impacts of climate change are occurring sooner than anticipated and are simultaneously driving up electrical demand while reducing power supplies.

The proposal said the continued operation of the Diablo Canyon plant beyond 2025 is "critical to ensure statewide energy system reliability."

The draft was obtained ahead of a California Energy Commission meeting on the state's energy needs and the role that the seaside plant midway between Los Angeles and San Francisco could play.

The California Legislature has less than three weeks to determine if it will take an extraordinary step and attempt to extend the life of the plant – a decision that would be made amid looming questions over the cost, who would pay and earthquake safety risks.

The legislative session shuts down Aug. 31 – when all business is suspended – and only a rare special session called by Newsom could provide a longer period to consider the move.

The Democratic governor, who is seen as a possible future White House candidate, has for months urged PG&E to pursue a longer run beyond a scheduled closing by 2025, warning that the plant's power is needed to maintain reliable service as the state transitions to solar, wind and other renewable sources of energy.

Newsom's administration is expected to outline its argument Friday during a three-hour California Energy Commission hearing focused on the state's power needs in the climate change era, and what role the decades-old nuclear plant might have in maintaining reliable electricity in the nation's most populous state.

Those raising questions with Newsom include state Sen. John Laird, a Santa Cruz Democrat whose district includes the plant.

With an extended run, "Who pays, and is there fairness in who pays?" Laird asked in an interview. "There have been additional earthquake faults discovered near the plant, and seismic upgrades were never totally completed. Will they address that?"

Laird outlined other issues that include who would pay for maintenance that has been put off because the plant is scheduled to close by 2025; whether there is time for PG&E to order and receive additional radioactive fuel – and casks to store spent fuel – to keep operating; and would electricity from the reactors get in the way of transmission for wind power that is expected to come on line in coming years.

Potentially, billions of dollars in costs could be in play.

"I'm really waiting to see whether ... and how they address all the issues that are associated with a possible extension before I decide what I'm going to," Laird said, referring to a possible vote.

"We are under a tight time frame," Laird added. "That begs the question of could they do everything it needs to be extended by 2025?"

Newsom's draft proposal amounts to an attempt to unspool a 2016 agreement among environmentalists, plant worker unions and the utility to close the plant by 2025. The joint decision to close the plant also was endorsed by California utility regulators, the Legislature and then-Democratic Gov. Jerry Brown.

PG&E CEO Patricia "Patti" Poppe told investors in a call last month that state legislation would have to be enacted by September to open the way for PG&E to reverse course.

PG&E, which has long said the plant is seismically safe, hasn't said much about whether it will push to extend operations beyond 2025. It is assessing that possibility while continuing to plan for closing and dismantling the plant "unless those actions are superseded by new state policies," PG&E spokesperson Suzanne Hosn said in a statement.

PG&E also would have to obtain a new operating license from the Nuclear Regulatory Commission to run beyond 2025.

With so many pending issues and little time, "it is rushed. It does not make sense," said David Weisman, legislative director of the Alliance for Nuclear Responsibility, an advocacy group.

"The plant can't run a day longer than the NRC license," which expires in August 2025, Weisman added.

Newsom's push for a longer run for the reactors doesn't square easily with his assessment in 2016, when as lieutenant-governor he supported the closure agreement as part of the State Lands Commission.

Seismic issues at the plant "are not insignificant concerns," he said at the time. "This is not the preeminent site if you're ... concerned about seismic safety.

September jobless rate falls to 5.2 per cent as fewer Canadians look for work

'There'll be no turkey': Sombre Thanksgiving for Atlantic Canadians hit hard by Fiona

The Thanksgiving holiday weekend has been dampened for thousands in Prince Edward Island and Nova Scotia who are still without power -- almost two weeks since Fiona hit on Sept. 24.

Chief of the defence staff Gen. Wayne Eyre has ordered an immediate halt to all non-essential activities in favour of boosting military recruitment and retention, as the Canadian Armed Forces faces an unprecedented personnel crisis.

Suspect in the deaths of a California family has been arrested for kidnapping and murder, authorities say

The suspect in the kidnapping and killing of four California family members, including their baby, was arrested late Thursday.