Bush says he wrote in Condoleezza Rice for president in 2020 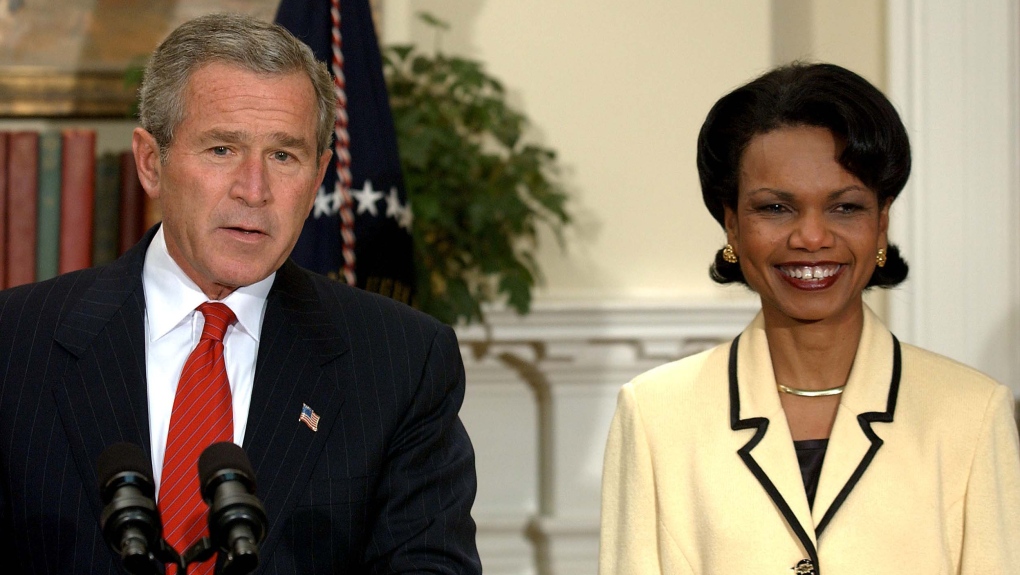 Former U.S. President George W. Bush wrote in the name of his former Secretary of State Condoleezza Rice on his 2020 presidential ballot rather than voting for his own party's nominee Donald Trump for reelection, he told People magazine. They are seen here in 2004. (Ron Sachs/Pool/Getty Images)

Former U.S. President George W. Bush wrote in the name of his former Secretary of State Condoleezza Rice on his 2020 presidential ballot rather than voting for his own party's nominee Donald Trump for reelection, he told People magazine.

"She knows it," Bush told the magazine, referring to Rice, one of his closest advisers during his presidency. "But she told me she would refuse to accept the office."

It's the latest example of how the 43rd president and patriarch of one of the Republican Party's most prominent dynasties has become estranged from the modern GOP, though in the same interview, Bush tamped down his recent criticism of the party.

On Tuesday, in a notable criticism of his own party, Bush described the GOP on NBC's "Today" show as "isolationist, protectionist and, to a certain extent, nativist," comments that he walked back in the interview with People.

"Really, what I should have said — there's loud voices who are isolationists, protectionists and nativists, something, by the way, I talked about when I was president."

He continued, "But I painted with too broad a brush ... because by saying what I said, it excluded a lot of Republicans who believe we can fix the problem."

The Bush family and Trump have been at odds since George's brother, former Florida Gov. Jeb Bush, ran against Trump and others in a bruising 2016 GOP primary. Trump regularly mocked Jeb Bush on the campaign trail using personal insults, faulted George W. Bush for the terrorist attacks of September 11, 2001 and attacked the Bush legacy.

Trump, however, remains arguably the most popular figure among the Republican base since leaving office in January, and the GOP has fought in recent months over whether to continue in Trump's image. Bush, who has largely avoided discussing politics since leaving office in 2009, has recently made several media appearances to promote his new book of paintings of immigrants and has called for the GOP to adopt a gentler tone and approach to immigration.

He hasn't criticized Trump by name, but the comments amount to an indirect challenge to Trump's legacy, as the 45th President often described immigrants in offensive terms and employed harsh border policies as key parts of his political strategy.

In 2016, Bush and former first lady Laura Bush left the presidential candidate section of their ballots blank and only voted for Republican candidates in down-ballot races, his spokesperson said.