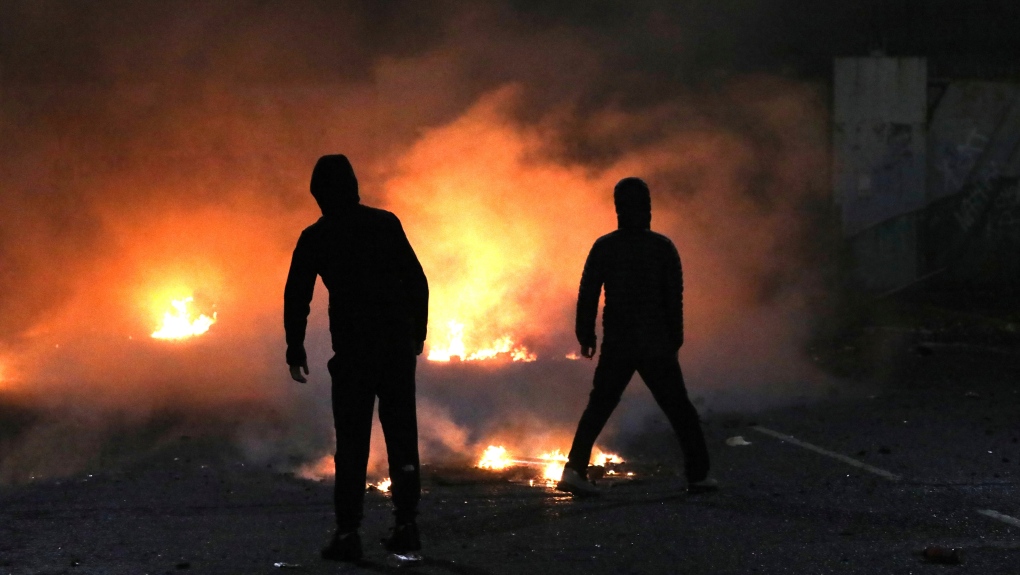 Nationalists and Loyalists clash with one another at the peace wall on Lanark Way in West Belfast, Northern Ireland, Wednesday, April 7, 2021. (AP Photo/Peter Morrison)

Parts of Northern Ireland saw their sixth consecutive night of violence Wednesday as unionists and nationalists clashed with police and each other.

Unrest first broke out last week amid rising tensions relating to Brexit and unionist anger over a decision by police not to prosecute leaders of the Irish nationalist party Sinn Fein for allegedly breaking coronavirus restrictions during the funeral of a former leading IRA figure.

In west Belfast on Wednesday, rioters clashed along the so-called "peace line" dividing predominantly unionist and nationalist communities, with police struggling to close a gate designed to separate the areas.

A bus was set on fire on Lanark Way near the junction with Shankill Road, police said. Photos and video from the scene showed youths on both sides of the gate throwing projectiles across, including petrol bombs.

Crowds have gathered at Lanark Way where a bus has been set on fire near junction with Shankill Rd. Crowds have also gathered at Springfield Rd/West Circular Rd. Please avoid these areas.

In a statement, Irish Taoiseach Micheal Martin condemned the violence and "attacks on police," adding the "only way forward is to address issues of concern through peaceful and democratic means."

"Now is the time for the two Governments and leaders on all sides to work together to defuse tensions and restore calm," Martin said.

British Prime Minister Boris Johnson said he was "deeply concerned by the scenes of violence" in Northern Ireland.

"The way to resolve differences is through dialogue, not violence or criminality," Johnson said on Twitter.

I am deeply concerned by the scenes of violence in Northern Ireland, especially attacks on PSNI who are protecting the public and businesses, attacks on a bus driver and the assault of a journalist. The way to resolve differences is through dialogue, not violence or criminality.

Tensions have been growing in Northern Ireland since the United Kingdom voted to leave the European Union, creating the potential of a border between the British-ruled north and the Republican of Ireland in the south, which remains in the EU. The lack of a border had been seen as a key element of the post-1998 peace that followed three decades of sectarian violence.

Under the Northern Ireland Protocol of the Brexit withdrawal agreement, a de facto border was created in the Irish Sea, with goods entering Northern Ireland from mainland Britain subject to EU checks, a move which angered unionists, who have accused London of abandoning them.

Last month, the Loyalist Communities Council (LCC), a grouping of unionist paramilitaries, said it was withdrawing its support for the Good Friday Agreement which ended the Troubles.

While the LCC said opposition would be peaceful, the letter said the groups would not rejoin "until our rights under the Agreement are restored and the (Brexit) protocol amended to ensure unfettered access for goods, services and citizens throughout the United Kingdom."

LCC chairman David Campbell recently said: "it's very easy for matters to spiral out of control, that's why it is essential for dialogue to take place."

Writing on Twitter late Wednesday, Mary Lou McDonald, an Irish lawmaker and leader of Sinn Fein, said: "a united voice for a halt to all violence and for the restoration of calm is the only acceptable stance from all political leaders. The attacks and intimidation must end."

A united voice for a halt to all violence and for the restoration of calm is the only acceptable stance from all political leaders. The attacks and intimidation must end. https://t.co/bO0Q0up1Bs