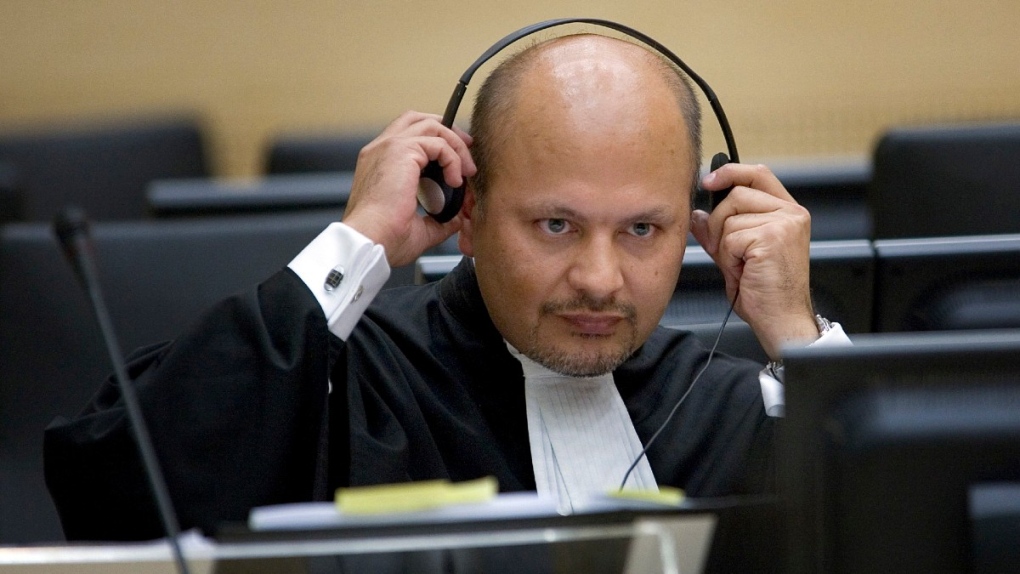 Karim Khan adjust his headphones in court in The Hague, the Netherlands, on June 4, 2007. (Robert Vos / AP)

THE HAGUE, NETHERLANDS -- British lawyer Karim Khan was sworn in Wednesday as the new chief prosecutor for the International Criminal Court, pledging to reach out to nations that are not members of the court in his quest to end impunity for atrocities and to try to hold trials in countries where crimes are committed.

Khan, a 51-year-old English lawyer, has years of experience in international courts as a prosecutor, investigator and defence attorney. He takes over from Fatou Bensouda of Gambia, whose nine-year term ended Tuesday.

"The priority for me, and I believe that's the principle of the Rome Statute, is not to focus so much on where trials take place, but to ensure that the quest for accountability and inroads on impunity are made," Khan said, referring to the treaty that founded the court, in his first speech after taking his oath of office.

"The Hague itself should be a city of last resort," he said. "Wherever possible, we should be trying to have trials in the country or in the region."

Khan said he wanted to work with countries that are not among the court's 123 member states to achieve justice. World powers the United States, Russia and China are not members and do not recognize the court's jurisdiction.

"My conviction is that we can find common ground in the quest and in the imperative to ensure we eradicate genocide, crimes against humanity and war crimes," Khan said.

Most recently, Khan led a United Nations team investigating atrocities in Iraq, telling the Security Council last month that he uncovered "clear and compelling evidence" that Islamic State extremists committed genocide against the Yazidi minority in 2014.

In the past, he has defended clients at international courts including former Liberian President Charles Taylor and Kenya's Deputy President William Ruto. ICC prosecutors dropped charges against Ruto and President Uhuru Kenyatta of involvement in deadly post-election violence in their country.

Khan begins his nine-year term as the court's prosecution office is struggling to keep up with demands for investigations. The court prosecutes genocide, crimes against humanity and war crimes in nations unable or unwilling to carry out their own prosecutions.

He said he wants to reform the office and immediately address what he called a "gender and geographical imbalance" among its staff. He also said prosecutors, who have lost several high profile cases in recent years, have to improve their performances in court.

"We have to perform in trial," Khan said. "We cannot invest so much. We cannot raise expectations so high and achieve so little so often in the courtroom."

His predecessor told The Associated Press in an interview Monday that there is "a serious mismatch" between what the prosecutor's office needs to do its work and what it is getting from the court's member nations.

"We have more or less had an explosion of cases that we are supposed to be handling, but we cannot do it without adequate resources," Bensouda told the AP.

She also had a warning for Khan that there are "attempts at every side, every corner, to politicize the actions of the prosecutor."

Among the most politically charged investigations Khan inherits are those in Afghanistan -- where prosecutors are pursuing cases against all sides in the country's conflict, including allegations of crimes by American troops and foreign intelligence operatives -- and in the Palestinian territories, where alleged abuses by Israeli forces and Palestinian militants are being probed.

Bensouda said every case the court opens "is politically charged one way or the other. So we are aware of that. But it should not be part of our decision-making."

Human Rights Watch had a similar message for Khan.

Bensouda's decisions to launch investigations in Afghanistan and the Palestinian territories "reinforced the office's independence," said Liz Evenson, associate international justice director at the rights group. "Karim Khan should build on his predecessor's efforts to ensure that those most responsible for grave crimes are held to account, regardless of their power or position."