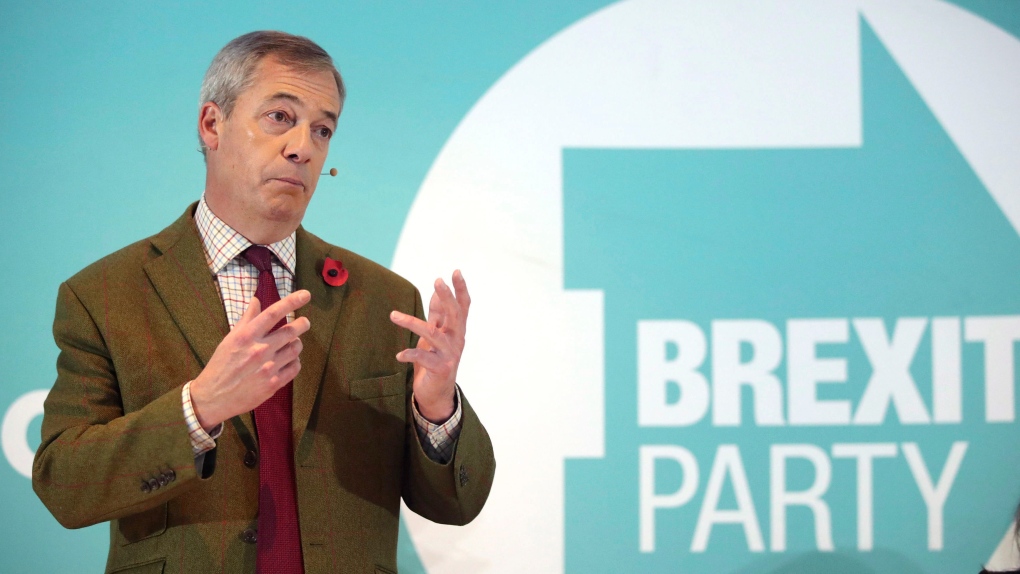 Brexit Party leader Nigel Farage gestures as he delivers a speech to supporters, during an event at the Washington Central Hotel, in Workington, England, Wednesday, Nov. 6, 2019. Britain goes to the polls on Dec. 12. (Danny Lawson/PA via AP)

LONDON -- Britain's Brexit Party has failed to reach a tactical voting pact with the ruling Conservatives, saying Thursday that it will field 300 candidates in next month's election to force Prime Minister Boris Johnson to deliver on his promise of a clean break with the European Union.

Brexit Party leader Nigel Farage said the party had to contest the seats in Britain's Dec. 12 election to keep the pressure on Johnson, rebuffing Conservative arguments that doing so risks splitting the pro-Brexit vote and boosts parties that want to remain in the EU. His comments came on the final day for candidates to register.

"What we've got so far in this campaign is for Boris to promise to change direction, what we now have to do is to hold him to account, to make sure we get a proper Brexit, and that's my job," Farage told the BBC.

Britain is holding a national election on Dec. 12 because Johnson wants to secure a majority so he can take the U.K. out of the bloc by the next Brexit deadline of Jan. 31. All 650 seats in the House of Commons are up for grabs.

Johnson reached a Brexit deal with the EU but so far has not persuaded enough British lawmakers to pass it. The single-issue Brexit Party, meanwhile, prefers to leave the EU without a deal, something that economists say would damage both the British and EU economies.

The Brexit Party earlier this week agreed not to run candidates in 317 parliamentary seats currently held by Conservative lawmakers after Johnson pledged there would be no further extension of the Brexit deadline. But the Daily Telegraph reported Thursday that Farage rejected a last-minute strategic offer from the Conservatives to promise to only put up token opposition in 40 key seats if the Brexit Party would stand aside in other constituencies.

After the deadline for candidate nominations passed, Farage tweeted that a top Johnson adviser had been calling Brexit Party candidates and offering them jobs if they would withdraw from their races.

"The system is corrupt and broken," Farage said.

At least one Brexit Party candidate did withdraw at the last minute. Rupert Lowe tweeted that he had decided not to run because he did not want his candidacy to strengthen the Labour Party's chances in his district in central England.

"I'm very worried about the Leave vote being split, very, very worried about these constituencies that have been Labour for decades, where the Conservatives have never won, can never win, and yet they are still putting up a candidate against our candidates who are the challengers to Labour in those seats," Farage said. "It tells me all I need to know about the Conservative Party. All they care about is the party, not getting a Leave majority in Westminster (Parliament)."

The Conservatives fear that voter support for Farage's party could prevent them from winning some closely contested seats, robbing the party of an overall majority in the House of Commons.

Three smaller parties -- the Liberal Democrats, the Greens and the Welsh-based Plaid Cymru -- have already announced a tactical electoral pact to increase the chances of electing lawmakers who support remaining in the EU. The parties will throw their support behind whichever anti-Brexit candidate in certain districts is the strongest.

The Labour Party, which promises a second referendum on any Brexit deal, has refused to join the so-called Remain coalition of the smaller parties.

Labour's hopes of forming a government may hinge on the Scottish National Party, which is also against Brexit, but won't support Labour in Parliament unless it promises to allow another referendum on Scottish independence if Labour wins in December.

Gregory Katz contributed to this report.