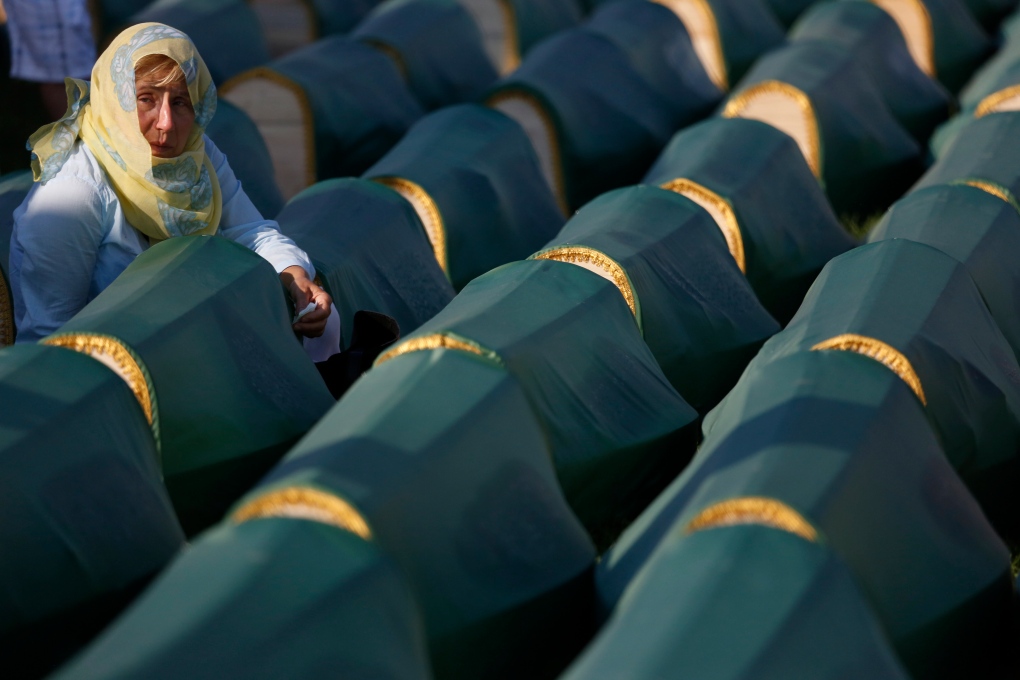 A Bosnian Muslim woman cries by the casket of her relative in the village of Kozarac, 260 kilometres west of Bosnian capital of Sarajevo, before a reburial on Sunday, July 20, 2014. (AP / Amel Emric)

KOZARAC -- Bosnian families on Sunday buried the remains of 283 Muslims and one Roman Catholic Croat who were killed at the start of the Bosnian war of 1992-95.

The bodies were laid out in green coffins in a sports field in Kozarac, where thousands prayed for them before burial in graveyards in the area.

Enisa Duratovic-Hegic, who buried her parents and eight other family members, said she hoped what happened to her and her family "never happens to anyone ever."

She said she prays to God to "punish the perpetrators if they evade justice on Earth."

The victims were killed in the summer of 1992, when Serb troops went from house to house in the area of Prijedor in northwest Bosnia and killed any non-Serbs they found. They hid the bodies in mass graves, some of which have only been discovered recently.

About 10,000 Bosnians remain missing from the war.

The victims buried Sunday were identified through DNA analysis after they were found recently in Tomasica, one of the biggest mass graves in Bosnia. It contained some 400 bodies.

Evidence from the Tomasica grave will be used during the trials of former Bosnian Serb leader Radovan Karadzic and his wartime general Ratko Mladic -- both suspects of genocide and other war crimes.

Bosnia's international administrator, Austrian diplomat Valentin Inzko, said at Sunday's funeral that "different communities do not have to live separated. Accepting this as an argument would be an insult for these victims because they were killed in the name of that ideology."

After the dissolution of Yugoslavia, Serbs tried to create their own ethnically pure state that was to include parts of Bosnia and Croatia. To achieve this, they expelled and killed non-Serbs from the desired territories.