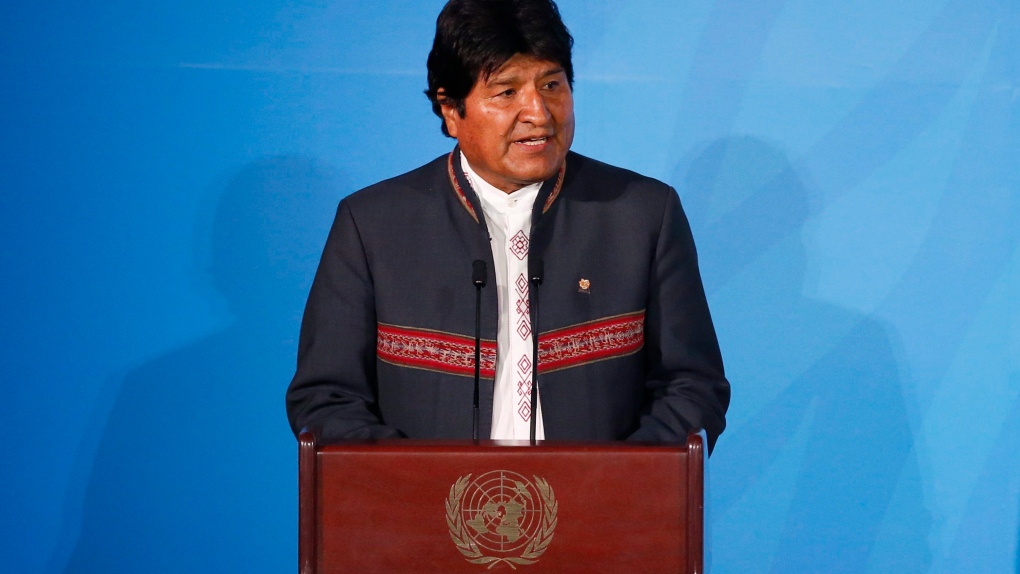 TORONTO – After being in power for 14 years, Bolivia’s president Evo Morales is facing a threat to his re-election -- mass protests and demonstrations over his perceived inaction on the forest fires sweeping across the country.

Morales is seeking an unprecedented fourth term as president in the lead-up to the federal election on Oct. 20, a feat that would continue his streak as Latin America’s longest-sitting president.

Morales has faced mounting scrutiny and corruption probes over the years, most recently after he lost a referendum called in 2016 to allow him to run for a fourth term. His party said the loss and imposition of term limits violated Morales’s human rights, and the constitutional court overturned the referendum decision, allowing him to campaign again.

A grassroots initiative bolstered by civil rights groups held a pro-democracy “cabildo,” or public demonstration, over the weekend in the country’s largest city of Santa Cruz de la Sierra. Conservative estimates put attendance in the hundreds of thousands. Protesters called for Morales to take action about the wildfires and questioned his right to the presidency.

The hashtag #SOSBolivia began trending on Twitter Saturday, as the movement gained traction and international sympathy. It is only in the last few days that heavy rains have managed to put out some of the fires that have been raging for months.

Protesters accuse the Morales government of a critical lack of response to the wildfires burning across vast swaths of forest territory, arguing it’s reason enough to cast a “voto castigo,” or protest vote, to force him out of the office he has held since 2006.

Morales’ government has countered claims of an inadequate response by saying it has spent more than $20 million on the firefighting effort.

“Despite the continuing destruction of our precious…forest by uncontrolled fires, Morales has refused to declare a national disaster,” said founder of Bolivian human rights and environmental activist group Standing Rivers Jhanisse Daca to CTVNews.ca in an email.

Standing Rivers is a human rights and environmental civil organization rooted in nonviolence, according to their Facebook page.

Declaring a “national emergency” in the face of the wildfires would “activate emergency response procedures on a national and not just departmental level,” Daca said, but Morales has not budged.

“We think that Evo’s [Morales’] priority right now is to be re-elected,” Daca said. “Anything else gets in the way.”

The human cost to Bolivian wildfires

In September, environmental groups said that the burnt land in Bolivia was the size of Switzerland, and was continuing to expand as the fires went unabated. Daca said everyone in the Standing Rivers movement who volunteered to work with the firefighting effort felt that it was a “life changing experience,” as authorities ran out of equipment and the brunt of labour fell upon the untrained and inexperienced.

“It was despairing [sic] to work so long without proper equipment and seeing no attempt from authorities to provide it,” Daca said. “I went to…one of the firefighter’s leaders to ask why, if we had asked for equipment for 500 firefighters, they only sent us 13 lanterns…they told us they just didn’t have enough resources to supply more.”

Daca said that her group worked “side-by-side” children as young as 14, “who wrote ‘firefighter’ with markers on their shirts,” in an effort to help stem the fires from spreading.

“They should be at school and we should have properly trained people doing this work,” said Daca.

Daca said the few trained firefighter brigades and soldiers who have been deployed by the government “sometimes…[felt] like the government wants them to die, because they very consciously neglect their peitions [for more resources].”

Standing Rivers reports that four civilian firefighters have died from “preventable causes” as a direct result of the government’s inaction to declare a national emergency.

Two Argentinian airplanes sent to the region were turned back according to organization, because Morales refused to authorize their help. Chilean firefighters went on record with local media saying there were “on alert” should the Bolivian government ask for aid, but had received no requests for support.

Initial reports of two water planes, one from the U.S., the other from Russia, sent by their respective governments to aid with the firefighting, were confirmed by Standing Rivers and the Russian government.

In an emailed statement to CTVNews.ca from, which was translated from Russian, the Russian Ministry of Foreign Affairs states “In response to an official appeal from the leaders of the Plurinational [sic] State of Bolivia, the government of the Russian Federation decided to send an IL-76 aircraft of the Russian Emergencies Ministry and an appropriate group of Russian specialists to…assist. We consider this step as an act of solidarity with the friendly people of Bolivia.”

However, Standing Rivers said that Bolivia lacked the infrastructure to fill the planes fast enough to be of any real help in the effort to douse the flames.

Within the millions of acres of land affected by the fires, “communities…have no water, no electricity, no way to subsist economically,” Daca said. “The fire crisis is not over…we still need help.”

“It feels like we are shouting in the dark because there is barely any international media coverage and the government is actively hiding the reality of our situation,” Daca said.

What caused the fires?

Morales signed a major trade export agreement with China in April for products like soy, quinoa, nuts, coffee and beef.

In order to meet increased demand, Morales approved the “Supreme Degree 3973” in July, which legalizes the expanded use of “controlled fires in forest areas to expand agro-cattle territory,” Daca said.

With an unusually dry July and high wind, the “slash and burn” efforts of ranchers and farmers have propelled the normally controlled burns into wildfires that have destroyed millions of hectares of land.

Daca said that thousands of people have migrated to the Santa Cruz region to take advantage of the agricultural boom, which is spurring the ferocity of the fires.

Much of the damage is in the Chiquitano Forest, a critically endangered transition zone between the wet northern Amazonian forests and the drier south regions, and the ancestral home of the Chiquitanos Indigenous groups, according to the World Wildlife Fund (WWF).

“Morales’ handling of the fires corresponds with his current priority: winning this third…re-election,” Daca says. “Morales has been aggressively courting votes from key sectors, the agro-cattle industry in Santa Cruz and his small farmer base.”

Daca said in the cabildo planned for Thursday, the demands from the people of “annulment of the laws that affects the environment, the declaration of a national disaster and respect [for] democracy,” will be reiterated.

“People are hurt, people are angry and we have a national election in two weeks,” Daca said. “This is a crisis moment.”

“Standing Rivers wants a Bolivia with democracy, with justice, with respect to indigenous and environmental rights and that begins with Morales accepting that he cannot stay in power indefinitely.”

Bolivians gather today in a Cabildo, a measure recognized by our constitution - huge citizens concentration to demand changes in public policy. Today’s Cabildo is about the country fires, our democracy, etc. Live transmission on fb of @ComiteProSC #CabildoSCZ #Bolivia #SOSBolivia pic.twitter.com/M5lioHNe7w

#CabildoSCZ Volunteer firefighter who worked on the Chiquitano forest fires performs a song he made for his lost colleagues and all those affected. #Bolivia #SOSBolivia pic.twitter.com/APD6g6iNDd

#CabildoSCZ Amazing images of the high quantity of people in today’s protest Cabildo, we are demanding reform on land-issuing procedures to avoid further damage to our forests, as well as respect to democracy. #Bolivia #SOSBolivia pic.twitter.com/dIBPEBI3qd