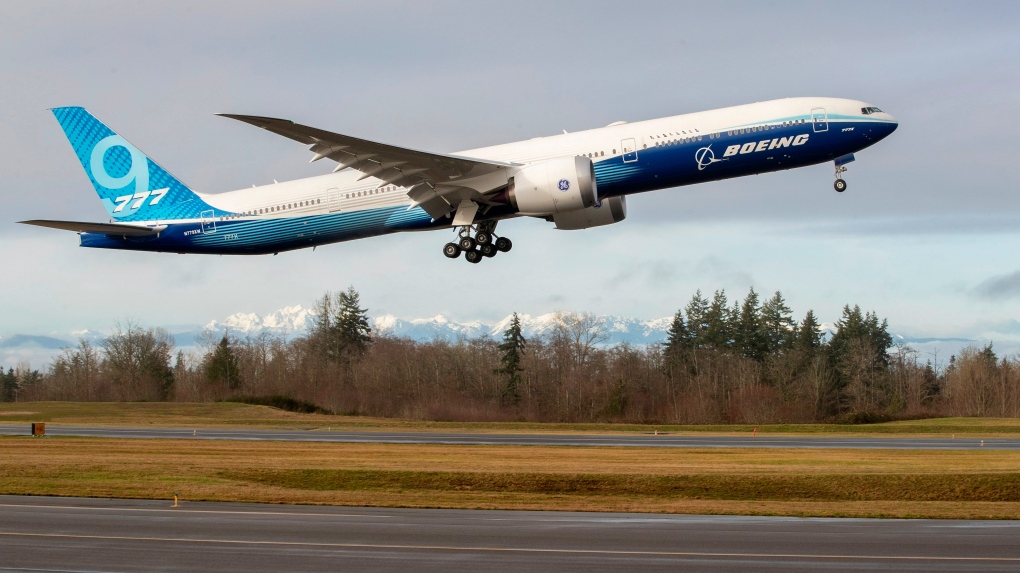 As the Olympic Mountains loom in the distance, the Boeing 777X takes off on its inaugural flight from Paine Field in Everett, Wash, Saturday, Jan. 25, 2020. (Mike Siegel/The Seattle Times via AP)

The world's longest and largest twin-engine airliner, the Boeing 777-9X, has finally taken to the skies for its maiden flight, offering a ray of hope for the troubled U.S. aviation company following months of grim headlines.

The flight had been postponed twice earlier in the week because of poor conditions, but as the aircraft taxied past the press viewing area ahead of takeoff, a rainbow appeared -- perhaps offering a positive portent.

When the moment did finally arrive, WH-001 was greeted by a light eight knot tailwind, six miles visibility, and broken clouds at 3,000 feet as it rocketed down runway 34Left at 9:08 a.m. local time.

As Boeing's newest flagship quickly gathered speed, it left a torrent of spray in its wake. After a takeoff roll of just 30 seconds, the behemoth rotated gracefully into the skies.

The relieved and excited crowd erupted into thunderous applause, though it was masked somewhat by the symphony of the roaring engines.

Designed to carry up to 425 passengers on routes of 7,600 nautical miles -- a distance that would cover most long-haul routes -- the 777-9X is expected to become one of Boeing's key aircraft in the years ahead.

However, uncertainties in the wake of deadly crashes that resulted in the worldwide grounding of Boeing's 737MAX series, have cast a shadow over the manufacturer's future.

Once airborne on Saturday, the first 777X was swallowed quickly into the clouds as it headed north out of unpopulated areas and the Washington Coast on a flight path chosen for safety reasons.

It climbed to an altitude of 14,000 feet and turned back east where it entered looping patterns over central Washington state, beginning the first of many test flights on the arduous road to certification and eventually passenger service over the next 18 months.

The road to this moment has been difficult to say the least. And the obstacles Mother Nature threw in front of its path for the first flight could easily be seen as a metaphor for Boeing and the entire program.

The day before, with cloud ceilings down to 2,000 feet, pelting rain, and winds gusting up to 29 knots, over 10,000 disappointed employees, journalists, and VIPs shivered for nearly five hours while the enormous 777-9X sat tantalizingly just off the runway, waiting for clearance to takeoff.

It wasn't meant to be. At 1:30 p.m. Friday with conditions not improving and the flight window closing, her first sortie was scrubbed. It's almost tradition that Boeing first flights occur in abysmal conditions, but this is the first time in memory that a flight had to be canceled due to elements.

In normal times, a first flight of a new airliner is a cause for celebration. Events like these happen maybe twice a decade.

But for Boeing, these are anything but normal times. Following two fatal crashes of the 737MAX, the continued grounding of Boeing's most important aircraft -- which is reportedly responsible for 40% of the company's profit -- has prompted one of the 104-year-old airframer's biggest ever crises.

The effects have been felt across the global aerospace industry and the broader U.S. economy. It's been estimated that the MAX grounding may cost a third to a half a point loss in the U.S. economy's GDP short-term.

With MAX production now at a standstill, plus Boeing's revelation earlier this week that it doesn't expect the U.S. Federal Aviation Administration to re-certify the MAX as safe to operate until June or July of this year, the timing was hardly optimum for a new Boeing aircraft model to take to the skies..

Though there is continued speculation of a new Boeing airplane to replace the 757/767 as a middle of the market airliner or the 737MAX with the future small airliner, Boeing has no entirely new models announced beyond the 777X.

The 777X, a program launched back in November 2013, is the successor to the most successful wide-body airliner ever built: the 777, which first entered service nearly 25 years ago.

The 777X is chock full of superlatives.

At 251 feet long, the 777-9 variant is the longest commercial airliner ever built. With a fuselage stretch of 9.4 feet over its predecessor 777-300ER, the 777-9 is able to accommodate up to three additional rows of economy seats 10 abreast, for a total of up to 426 passengers in a typical two class configuration.

All that and an increased range of 7,285 nautical miles -- 220 miles more than the airplane it replaces.

With the A380 and 747-8 Intercontinental ending their runs, the 777-9 stands alone as the largest airliner by passenger capacity being built in the world. Its main competition, Airbus' A350-1000, is proportioned more like the smaller 777-300ER.

To lift the maximum takeoff weight of this 775,000 pound beast into the air, Boeing has built a new carbon-fiber-reinforced polymer wing with a wingspan of just over 233 feet, with raked wingtips.

Each wing is the largest single composite structure in the world.

To fit on the same gates, taxiways and runways as the current 777-300ERs, Boeing has designed distinctive 11-foot folding wingtips that deploy just before take-off and retract upon landing. Though this is common on Navy fighter aircraft built for landing on an aircraft carrier, folding wingtips on an airliner are a commercial first.

Under the wings are the largest, most powerful engines ever mounted on a commercial airliner: General Electric GE9X.

These develop an incredible 105,000 pounds of thrust apiece while reducing fuel burn by 10% from their predecessor GE90 engine

The engines' diameter are as wide as a 737 fuselage.

In spite of or because of their cutting-edge design and immense power demands, design flaws in the compressor of the engines have been a significant contributing factor to delaying the first flight of the 777X from 2018 to early 2019 and then to January 2020.

That said, this isn't an unusually lengthy gestation in the recent history of new airliner programs.

In an era of flight shaming and airlines' increased emphasis on eco-friendliness and efficiency, the 777X is claimed by Boeing to deliver a net efficiency gain of 13% on a cost per seat basis compared to the 365-seat 777-300ER with a 29% reduction in emissions.

Indeed Boeing says its newest flagship is 22% more efficient than the world's largest airliner, the A380.

"The operating ecomomics of previous generation 777s, which could carry nearly as many people as the 777X with just two engines were already considerably better than those of the A380," said airline analyst Seth Kaplan.

"Considering the 777X will be even more efficient, there's long-term hope for this airplane program even though the market reception hasn't been great so far."

Economics, engineering, and efficiency aside, the 777X is being designed to improve the passenger flying experience and not just in the premium cabin section of the plane.

Borrowing from its pioneering stablemate, the 787 Dreamliner, Boeing's newest 777X has larger windows and a wider cabin translating to wider seats (especially in economy).

A lower cabin altitude of 5,000 feet versus the typical airliner's 8,000 feet reduces the effects of fatigue and jet lag. The 777X also has higher levels of humidity to abate dehydration, cleaner air, less cabin noise, and smoother ride technology.

So how and when can passengers expect to find themselves sitting aboard a new 777-9?

Even with the increased scrutiny and testing for certification, Boeing projects a service entry in late 2021 with Lufthansa.

Boeing has 308 firm orders and 300 options of these $440-million aircraft (at list prices, though discounts can reduce cost by half).

But the stability of these orders is uncertain with Gulf carriers and Lufthansa reportedly re-negotiating and lowering order their commitments, partially due to economic weakness.

Though the 777-300ER is immensely successful in the Americas, North American orders are yet to emerge.

As the replacement cycle for A380s and 777 Classics accelerates, Boeing expects the 777X order book to bulge by the middle of the decade.

But many industry analysts question whether this jumbo twin is now simply too large for the market as smaller Airbus A350s and Boeing 787s have attracted far more orders partially due to the rise of hub by-passing nonstop point-to-point service.

Will the 777X succeed in the market, especially with the specter of the 737 MAX hanging out there?

"The 777X is an intelligent derivative of the 777, but I'm not sure if the 777X will be raging success for Boeing as orders remain tepid, in part due to the delay of the GE engines, because the smaller 787 Dreamliner is such a good aircraft, and because the MAX has severely damaged Boeing's reputation," Harteveld says.

"The 777X is the younger kid whose older siblings are overachievers.

"I think the 777X will have a slow burn as an aircraft where its success may come over time, once the 777X has proven itself as a reliable aircraft that meets or beats Boeing's performance specifications, and once Boeing has regained airlines' trust as a manufacturer."

First flights are very rare and special, so for just a few hours, the business of aviation and Boeing's travails slipped into the background so everyone could just soak in the moment.

In an email to the Boeing worldwide team, Boeing Commercial Airplanes President and CEO Stan Deal wrote: "I am incredibly proud of all our teammates who meticulously designed, assembled and supported the 777X. This day is ours to celebrate, and proof that if we work together we can achieve big things that make a difference in the world."

The first flight was originally intended to last nearly four hours, but for reasons not immediately clear, it was cut short.

As the aircraft descended, its landing lights penetrated the 700-foot cloud deck and the crowd gasped with anticipation.

The scale of the airplane was apparent as it rolled out past, with the wingtips automatically retracting to their 90-degree locked state at 60 mph just as intended.

In keeping with the current climate, this first flight event was more low key than previous similar events, but the crowd was no less appreciative. Boeing employees needed a morale boost and they got it. The enormous jetliner pulled up to an enthusiastic crowd of employees and customers.

The two pilots Van G. Chaney and Craig Bomben alighted to thunderous applause, cheers, and embracing hugs from their families and co-workers.

Addressing reporters, they could barely contain their enthusiasm.

"It was so much fun," said Chaney, the pilot-in-command and 777/777X chief test pilot. "The moment we rotated and saw the chase plane go by, it was very emotional."

VP of Flight Operations Bomben added: "To see all the excitement of the employees on the side of the runway who made it happen and the outstanding performance of the plane, it made us extremely proud. We're going to be very proud of this airplane in service."