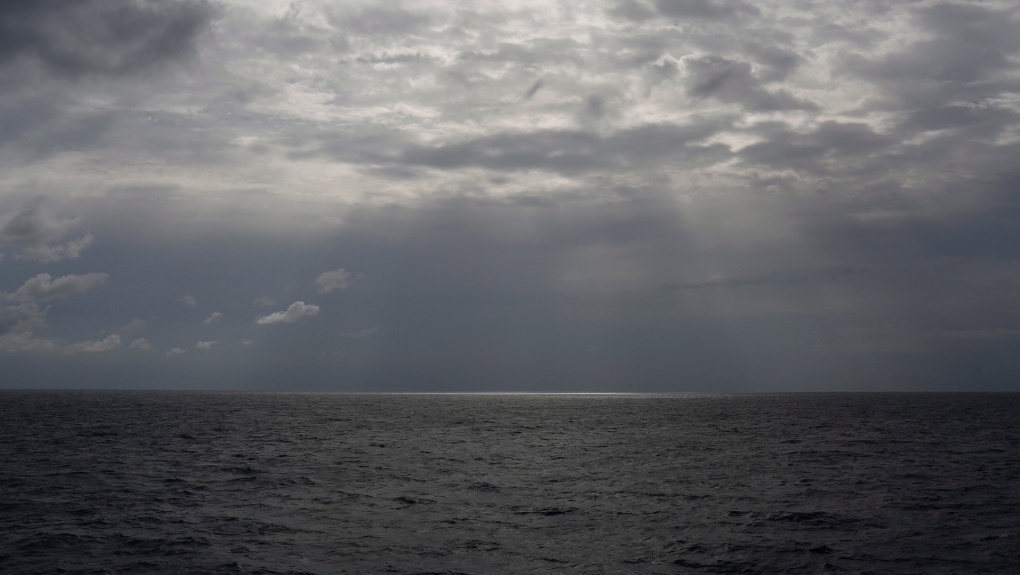 In this Sunday, Sept. 8, 2019 file photo the sun pierces the clouds over international waters north of Libya in the Mediterranean Sea. A rubber dinghy packed with 91 migrants that set out from Libyan shores in hopes of reaching Europe has apparently gone missing in the Mediterranean, the UN refugee agency said Thursday, Feb. 20, 2020. (AP Photo/Renata Brito, File)

CAIRO -- A rubber dinghy packed with 91 migrants that set out from Libyan shores in hopes of reaching Europe has apparently gone missing in the Mediterranean, the UN migration agency said Thursday.

The inflatable boat carrying mostly African migrants departed from al-Qarbouli, 50 kilometres east of the capital Tripoli on Feb. 8, said Osman Haroun, whose cousin was on board. He hasn't heard from the 27-year-old Mohamed Idris, or his 10 other friends also on the boat, since.

"It's the first time I've heard of this happening," Haroun told The Associated Press by phone from the western coastal district of Zawiya, where he has lived with his family since fleeing the conflict-ridden Darfur region of Sudan in 2016.

"Those who set out you usually hear from within a few hours ... no one has even seen the boat's remains."

News of the missing boat comes amid criticism of the European Union's lack of rescue missions in the Mediterranean Sea. Member countries agreed earlier this week to end an anti-migrant smuggler operation involving only surveillance aircraft and instead deploy military ships to concentrate on upholding a widely flouted UN arms embargo that's considered key to winding down Libya's relentless war.

Alarm Phone, a crisis hotline for migrants in need of rescue at sea, drew attention Thursday to what it called "an invisible shipwreck," urging Libyan, Maltese and Italian authorities to share information about the day's rescue missions.

It said a black rubber boat with 91 people on board, reportedly hailing from Sudan, Niger, Iran and Mali, called the hotline in distress at 3:30 a.m. Feb. 9. The passengers managed to share their GPS co-ordinates minutes later, which put them in international waters north of Libya.

Alarm Phone passed the SOS to Italian and Maltese authorities and to the Libyan coast guard, an EU-trained force criticized by human rights groups, which patrols Mediterranean waters and intercepts migrants to keep them from reaching European shores.

The Libyan coast guard took five hours to respond to Alarm Phone's urgent request, and said it dispatched two ships to search for the missing vessel, without providing evidence.

Alarm Phone lost contact with the boat over two hours later, when it heard people panicking, saying the engine had failed. Migrants were slipping into the sea, they told the hotline, as water flooded the shrinking dinghy.

"For sure something bad has happened," said Haroun.

The International Organization for Migration cross-checked search and rescue records from Italy, Malta, Libya and the non-governmental Aita Mari rescue ship, but could not match the missing migrant boat with any recent interceptions or rescues.

Italian, Maltese and Libyan authorities did not respond to requests from The Associated Press for information about their rescues. Frontex, the EU border agency, said it deployed a plane to search for the missing boat.

Authorities have also yet to respond to requests put forward by Alarm Phone on Monday.

Both Alarm Phone and IOM say they fear the worst.

"Tragically, the last hypothesis is that this could be another invisible shipwreck," said Marta Sanchez, a project officer with IOM's Missing Migrants project who examined the records.

Sanchez said IOM would wait a few days before officially recording the 91 people as missing, to see if any remains turn up.

The IOM tally of "ghost boats" lost in the Mediterranean Sea has been rising. Last year, the agency documented seven disappeared vessels carrying 417 people, a four-fold increase from the year before.

The migration agency sources its data from non-government organizations and testimony from families, and cross-references the reports against records of attempted crossings, rescues and interceptions.

Haroun, 29, said he and his cousin had repeatedly tried and failed to cross the Mediterranean throughout their years in Libya. As the North African country descended into chaos following the 2011 uprising that toppled and killed longtime dictator Moammar Gadhafi, it became a haven for smugglers ferrying African migrants to European shores.

The voyage is perilous, often harrowing. As of last October, roughly 19,000 migrants have drowned or disappeared on the sea route since 2014, according to IOM.

Each time Haroun and Idris set out, the coast guard forcibly returned them to war-ravaged Libya. In 2020 alone, 1,700 people have been brought back, according to IOM, often landing in squalid militia-run detention centres rife with torture and abuse.

Haroun paid 1,500 Libyan dinars (some $1,000) upfront to smugglers, and bid his cousin farewell, imagining he would join his four relatives who have crossed the sea and started new lives in England and France.