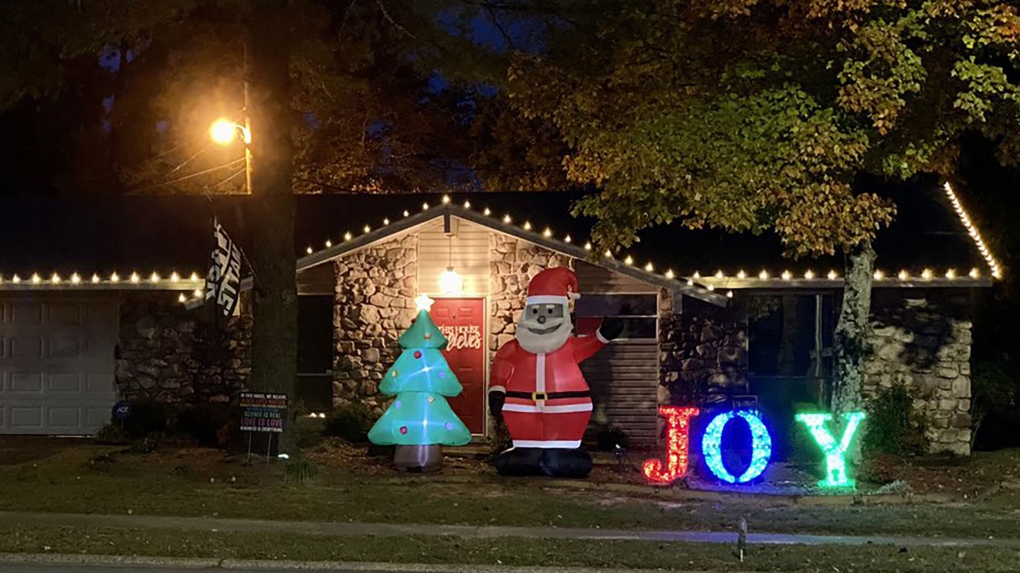 Chris Kennedy's Christmas display features a seven-foot Black Santa that stands tall in his yard along with a Christmas tree and a large shining sign that reads "Joy."

Until now, he has received nothing but compliments since he first moved to his North Little Rock, Arkansas, neighborhood in 2017.

But just before Thanksgiving this year, he received in the mail an anonymous racist note condemning the decorations in his yard.

"You should not try to deceive children into believing that I am a negro," said the letter, which was signed 'Santa Claus.' "You being jealous of my race is no excuse for your dishonesty."

"I am trying to be as nice as I can in this very moment because I am actually filled with rage," Kennedy said in his live stream.

In the video, he also revealed an image of a white Santa with two thumbs down, and the label taped to the front of the envelope that resembled the Lakewood Property Owners Association's (LPOA) logo.

"The real thing that angered me was the fact that the person who wrote it suggested I move out east where I guess they feel all black people live," Kennedy told CNN.

The LPOA had nothing to do with the letter, Lakewood Property Owners Association executive director Evan Blake told CNN.

Blake said that he visited Kennedy and his family to condemn the letter. He also gave him a free membership to the LPOA as a gesture of assurance that the Kennedys are very much a part of the North Little Rock community.

"We have never had anyone attack anyone based on their race," Blake said. "Racism is something that we do discriminate against and we will not stand for it."

Kennedy does have his suspicions about what motivated the unknown person to send the insensitive letter and worries someone will try to take down his decorations.

"I feel like it's a combination of politics and actual racism," Kennedy told CNN. "I am not sure that it was solely about just the Black Santa display as much as it was legitimately just racism, in general."

Other North Little Rock residents living in different neighbourhoods have contacted Kennedy to share similar stories about racist remarks and gestures. According to the 2019 U.S. Census Bureau, African-Americans comprise 44.7% of the population in North Little Rock.

For Kennedy, this isn't just about the colour of Santa's skin, but instead about a rich family tradition that brings back fond childhood memories of looking at elaborate light displays with his father, who died over 15 years ago on Thanksgiving Day. Each year on Halloween, Kennedy, his wife and 4-year-old daughter decorate early for the holiday season.

"Putting up Christmas displays reminds me of him," Kennedy said of his father. "The main reason we put out the display is to bring joy to the neighborhood and brighten it up a little bit."

And the community is rallying behind him in no better way than spreading this same Christmas cheer on their own lawns.

"People are buying Black Santas and trying to flood the neighbourhood," said Blake.

The LPOA is planning on displaying a Black Santa in its office as soon as it arrives in the mail.

Although appreciative of the army of Black Santas now lining his street and kind notes from neighbours disgusted by the act, Kennedy says he would rather see people donate to Ronald McDonald House Charities of Arkansas for the children who do not get to be at home with their families this Christmas.

"Keep smiling, keep God first and push forward," is the message Kennedy wants to share with anyone who may be battling similar instances of racism during these contentious times.

"There are still loving and caring individuals out there," said Kennedy. "I know that my neighbourhood has definitely lifted us up."