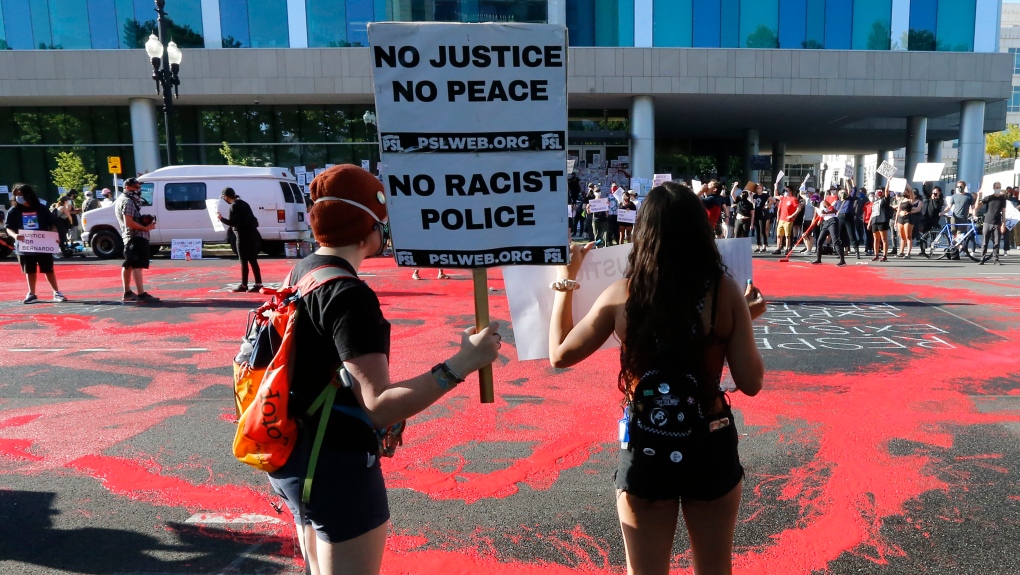 SALT LAKE CITY -- Some Black Lives Matter protesters in Salt Lake City could face up to life in prison if they're convicted of splashing red paint and smashing windows during a protest, a potential punishment that stands out among demonstrators arrested around the U.S. and one that critics say doesn't fit the alleged crime.

The felony criminal mischief charges are more serious because they carry a gang enhancement. Prosecutors said Wednesday that's justified because the protesters worked together to cause thousands of dollars in damage, but watchdogs called the use of the 1990s-era law troubling, especially in the context of criminal justice reform and minority communities.

"This is so far beyond just the enforcement of the law, it feels retaliatory," said Madalena McNeil, who is facing a potential life sentence over felony criminal mischief and riot charges. Charging documents say she bought red paint at a Home Depot before the July 9 demonstration sparked by a fatal police shooting ruling. She later yelled at and shifted her weight as if to slam into police during the demonstration, charges state. "It's really frustrating and scary ... I just feel so much concern for what this means for the right to protest in general."

The charges have Democratic leaders at odds in Salt Lake City, the liberal-leaning capital of conservative Utah, with the top county prosecutor arguing vandalism crossed a line and the mayor calling the charges too extreme.

The potential life sentence stands out as harsh punishment even among other people facing felony charges stemming from protests around the country. In Portland, Oregon, for instance, a 32-year-old man is facing up to 20 years on an arson charge alleging he broke into a building that houses the police headquarters and set an office on fire.

"I don't think anyone is going to be going to prison on this," he said. Gill is a generally reform-minded Democrat who said he has participated in Black Lives Matter protests himself and declined to charge dozens of protesters accused of curfew violations.

Still, he argued "there's some people who want to engage in protest, but they want to be absolved of absolved of any behaviour," he said. "This is not about protest, this is about people who are engaging in criminal conduct."

But for the American Civil Liberties Union of Utah, invoking a law aimed at street gangs in troubling, especially against demonstrators of colour. "You are calling participants in a protest gang members," said attorney Jason Groth.

And there are other side effects to criminal charges, he said. McNeil tweeted Thursday she was asked resign from her job in the non-profit sector and all the defendants have to post $50,000 bail to get out of jail.

"This is the highest degree felony. This is usually reserved for murders and rapists," said attorney Brent Huff, who represents co-defendant Madison Alleman.

Another defence attorney Jesse Nix, who represents protester Viviane Turman, questioned whether Gill should have filed charges involving his own office. "No one should get life in prison for putting paint on a building," he said.

Gill countered that short staffing during the coronavirus pandemic necessitated that but others will handle the case going forward.

More than 30 people have been charged with various crimes in Salt Lake County since the national wave of protests over George Floyd's death began in late May. Similar first-degree felony counts have also been filed against people accused of flipping and burning a police car May 30.

"We have to have some agreement of what constitutes protected First Amendment speech," Gill said. "When you cross that threshold, should you be held accountable or not?"