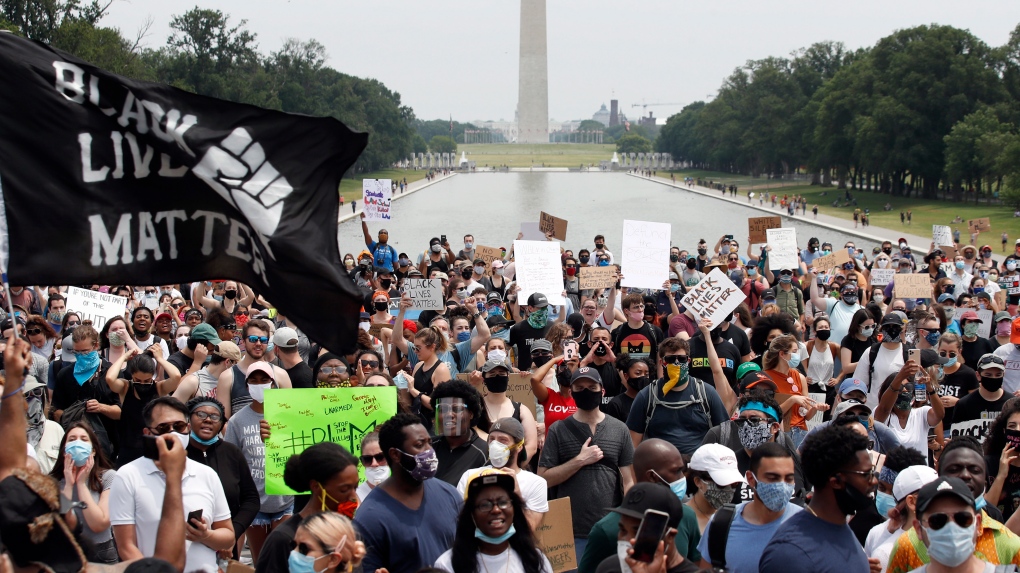 In this June 6, 2020, file photo, demonstrators protest at the Lincoln Memorial in Washington, over the death of George Floyd, a black man who was in police custody in Minneapolis. Black Lives Matter Global Network Foundation, the group behind the emergence of the Black Lives Matter movement, has established a more than $12 million fund to aid organizations fighting institutional racism in the wake of the George Floyd protests. (AP Photo/Alex Brandon, File)

Inspired by the global protests against systemic racism and police brutality, Nigerian American blogger Nifesimi Akingbe donned a black shirt that read "I am Black history," and began recording a video.

Akingbe then went on to list her frustrations about racism in America and directed her message to Black immigrant communities like her own: This is your battle, too.

"When these cops see us or when some of these racist people see us, they see a Black person," Akingbe said during the 34-minute video posted on YouTube. They "don't care if you were born in Alabama, if you were born in Nigeria, in Ghana, in Sierra Leone. They see one colour."

Akingbe, of suburban Baltimore, is among the many young Black immigrants or children of immigrants who say they are speaking out for racial equity while also trying to convince older members of their communities that these issues should matter to them, too.

"I feel like their mindset is different," the 31-year-old told The Associated Press, referring to immigrants like her parents, who she says tend to overlook racial issues.

To be sure, most Black immigrants have experienced the brutal legacy of European colonization, and those from Latin American and Caribbean nations have a history of slavery in their own countries.

In the U.S., from the civil rights movement to the current Black Lives Matter demonstrations, there have also been generational tensions in the African American community when it comes to taking a stand against racism. But these have largely been over tactics, said David Canton, a professor of African American history at the University of Florida.

"Everybody has a role in the movement. People have to learn to live with that and respect people's decisions," Canton said.

Like Akingbe, fellow Nigerian American Ade Okupe has been having conversations with older immigrants in hopes that they will see police brutality as something that also affects them.

So far, the 27-year-old said, he hasn't been successful.

"It's a non-issue to the older generation," said Okupe, who lives in Parkville, a Baltimore suburb. During some of their chats, older immigrants tell him they came to America to work and provide a better life for their children, not to protest about race.

"They want to make sure they are not doing anything that rocks the boat," said Daniel Gillion, author of "The Loud Minority: Why Protests Matter in American Democracy."

"They are trying to be good citizens and protests, in their eyes, -- pushing back and criticizing the nation -- isn't their perception of being a good citizen."

For some immigrants, their attitudes are driven by worries about their children.

Elsa Arega, an Ethiopian immigrant who lives in Lancaster, Pennsylvania, was horrified by the police killing of George Floyd in May and cares about what is going on. But she also wants to keep her daughter, a college student in Virginia, safe and fears her daughter could put herself in danger if she participates in protests.

"I just want her to focus on her education," Arega said, speaking her native Amharic language. "People come to this country to work and change their lives, not to get into an argument with the government."

The number of Black immigrants to the United States has increased in recent decades largely due to family reunification, the admission of refugees from war-torn countries like Somalia and the Democratic Republic of the Congo, and the diversity visa lottery program, according to the Migration Policy Institute.

This has led to ethnic enclaves across the U.S. West African communities are dominant in New York City, Ethiopians have made their mark in the Washington, D.C., area, and Black immigrants from the Caribbean are prominent in Florida and New York City. Somalis have a sizable presence in Minneapolis, where Floyd died under the knee of a white police officer who was later charged along with three other officers.

The global protest movement sparked by Floyd's death came eight years after the police shooting death of 18-year-old Ramarley Graham, the son of a Jamaican immigrant, in the Bronx.

In 1999, Guinean immigrant Amadou Diallo was killed in a barrage of 41 shots fired by four white New York City police officers who mistook his wallet for a gun. His death sparked widespread demonstrations but the officers were acquitted of all charges in 2000. That same year, the fatal police shooting of Patrick Dorismond, a 26-year-old Haitian American, ignited another wave of protests against police brutality in New York.

Such police killings can be unsettling to immigrants, many of whom come to the U.S. in search of a better life and then find themselves injected into America's centuries-old racial strife.

"When they get here and they realize that they are treated no differently, they begin to feel a certain amount of camaraderie with Black Americans," said Bill Ong Hing, founder of the Immigrant Legal Resource Center and a law professor at the University of San Francisco.

In fact, one of the co-founders of the original network of Black Lives Matter was Opal Tometi, the daughter of Nigerian immigrants. Civil rights leader Malcolm X was also the son of an immigrant, from Grenada.

"At the end of the day, we are all one," said Kwad Annor, a 25-year-old Ghanaian American who lives in Houston. "We are all one community across the diaspora, whether you are a Black American, raised on the African continent or you're from elsewhere."