Watch the video above and read the transcript below.

Clarence Lusane: Well, I think there is a conflict in the black community. Clearly, Bloomberg's record in New York — stop and frisk, his position on the Central Park Five and payouts to them and other policies — were clearly racist.

At the same time, you have someone who has had a long history with black communities. He knows black mayors, which is why he's gotten over 100 endorsements from mayors, including mayors, black mayors. The mayor of Washington, D.C., for example, has endorsed his candidacy and he's gotten endorsements from members of the Congressional Black Caucus. So you have a complicated figure who has decided to join the race and has upset the political racial balance.

Up until now, Joe Biden more or less had a hold on the black vote. At least that's what the polls were showing. But that clearly is eroding because Bloomberg has been extremely smart in targeting black communities with millions and millions and millions of dollars of ads, which not only gave his name recognition a higher profile, but put him in the game and no other candidate had been able to really start to address some of the support that Biden had. Now, I would say that there are a lot of young black people who were trending towards Sanders. And so you've got a mix now where the black vote is not settled on any one candidate.

Joy Malbon: There seem to be competing opinions, especially among columnists, saying, 'no, we should not forgive and forget.'

Clarence Lusane: Well, there's certainly a lot of people who, at least at this point, is saying no to Bloomberg under any circumstances. Their anger at not only his policies, but his long reluctance to acknowledge the harm that those policies did, at least some people are saying that they see this as unforgivable.

But there's a strong trend in the black community of basically, blue, no matter who. Meaning that anybody they see as able to beat Donald Trump should get the vote. And that's, so unless someone is seen as equal to Donald Trump in his racism and his authoritarianism, any candidate that emerges from the Democratic Party will get a lot of votes for people who in other circumstances otherwise wouldn't. But there's such an antipathy, such an antagonism towards Donald Trump that Bloomberg has a chance.

Joy Malbon: So what do people see in Bloomberg that he could possibly beat Trump? Is it because he's another New Yorker who can get in the gutter with Trump?

Clarence Lusane: Well, I think Bloomberg, one, knows Trump. They know each other very well. And Bloomberg also has little hesitation to be critical of Trump. His ads have been very well produced, that basically document a record of a president that has basically lied, that has broken the law. Has acted in egregiously unfit ways. And so Bloomberg up until now has been very effective, in showing that he couldn't take he can take on Donald Trump. And so I think Trump probably should have some concern if it's not Bernie, if it becomes for whatever reason, Bloomberg, it will not be an easy battle for Donald Trump.

The question for the Democrats is, can they come up with a candidate that can bridge the divide in the party right now between the left, on the one hand with Bernie and Elizabeth Warren, and then the moderates on the other side with Buttigieg, and Klobuchar and Biden fighting for the moderate lane.

Joy Malbon: Is there a chance that they could actually blow it by not unifying behind one candidate?

Clarence Lusane: There's definitely a chance. The winning strategy, I think, is to keep the focus on Donald Trump. What happens in primaries is as candidates are trying to win, then they start going after each other. So it's like, 'This is where I'm at. This is where they're at. We're different. This is why you should pick me.' And Donald Trump, of course, is recording all of this. So the Trump campaign, what they need to very rapidly do is really shift to where there's unity. So whether you're on the left in the Democratic Party or you're in the middle, Donald Trump really is the objective here.

Joy Malbon: Bernie Sanders, there's been a clash. The knives are out clearly for Mayor Bloomberg and he's going to take the debate stage.

Clarence Lusane: There will be a lot of criticism of him buying his way into the campaign.

Joy Malbon: Is that a bad thing? Buying your way, spending all this money?

Clarence Lusane: Legitimate criticisms...Well, as long as we have an election system that does not create a circumstance where there can be an equal playing field, then we're going to have these kinds of situation. Donald Trump basically did it. Steyer did it. You go in back in the past, you look at H. Ross Perot. So there's a history of very wealthy individuals attempting to buy themselves into into the election and into the presidency. But it still boils down to, you have to win delegates. You have to win popular support. And so that's really the test for Bloomberg and and for the other candidates.

Can they stay positioned so that they do present themselves, at least in terms of policy, alongside of Bloomberg and then see where they stand? But again, I would go back to the focus which Bloomberg has focused on. But for the other candidates is to keep the eye on the prize, which is, how do you get Donald Trump out of office and not back in the White House in November?

Joy Malbon: Even if that means supporting a Mayor Bloomberg with a very checkered past?

Clarence Lusane: The reality is there's going to be one candidate coming out of the Democratic National Convention. And at this point, it's unclear whether that will be Bernie, whether it be Bloomberg, could be Elizabeth Warren. It looks shaky for Joe Biden, but somebody is coming out. And if the Democratic base and people in this country who really want to maintain a democracy come together, then Donald Trump can be defeated. And that means voting for the Democratic nominee. There's no other way around it at this point. 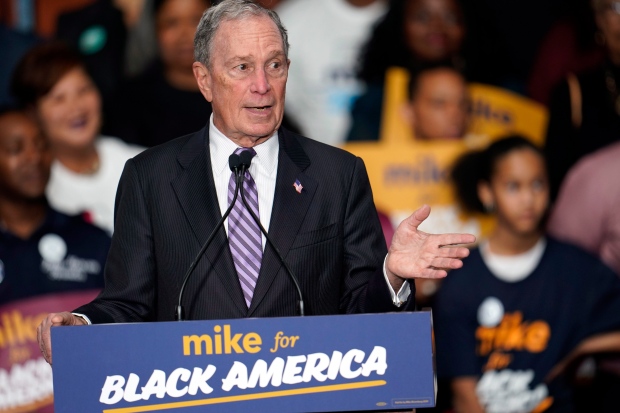 Joy Malbon: Do you foresee, though, like a problem with, you know, Bernie Sanders supporters said four years ago to me that they would not support the nominee, who was Hillary Clinton at the time? Some of them are suggesting the same thing. It's Bernie or bust.

What I would suggest is there's a larger picture that goes beyond the election. And the question is, do you want Donald Trump in office for the next four years making decisions on Supreme Court, on other federal judges, driving public policy? Or do you want a circumstance where you have someone in office who you may not like, but at least the democratic norms in the democratic institutions aren't under daily assault?

Joy Malbon: What are the advantages, do you think, that Mayor Bloomberg has?

Joy Malbon: I know it's early in the race, but who would you take bets on? Who might be the nominee at this point?

Clarence Lusane: I'm not sure, because it seems to me that we could very well have a brokered convention for the first time in decades because the map of primaries is much earlier. So pretty much if no one comes out of Super Tuesday with overwhelming amount of delegates, the momentum, then it's hard to have anyone catch up to get the requisite number of delegates to go into convention with basically the nomination in hand.

Joy Malbon: I don't get a sense from you that that you think Bloomberg is a terrible person. I don't get that sense from you, like you see him as a possible candidate, dispassionately, because he could actually defeat Donald Trump.

Clarence Lusane: I think he could emerge particularly with Biden looking very bad. And clearly he's fallen. And after South Carolina, which may not save Biden or just may barely keep him in the race, then very pragmatic discussions are going to be held at dinner tables and lunch counters around the country, around the Democratic side of the country, of who can actually win. And then that very quickly could boil down to Sanders and Bloomberg.