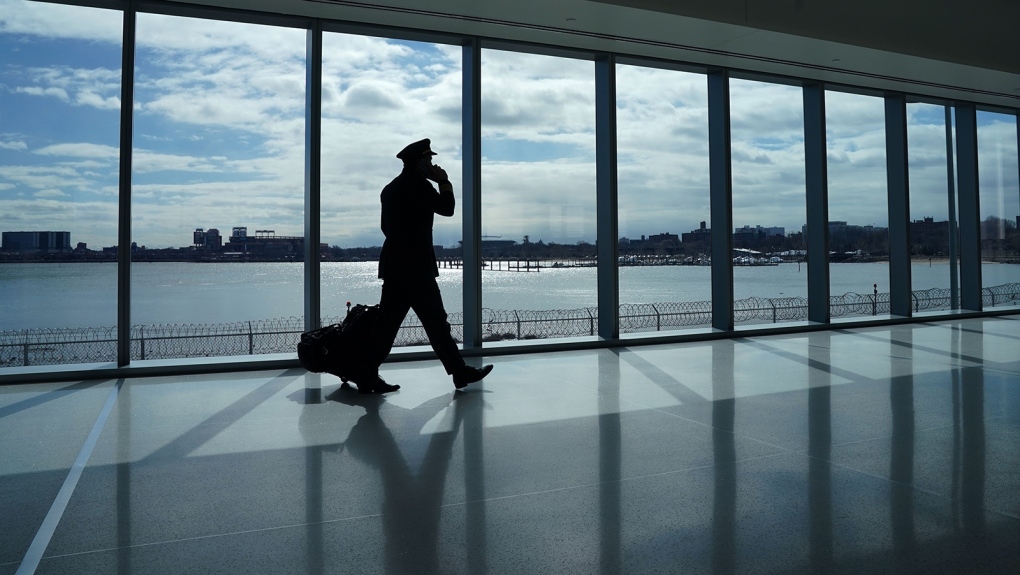 On September 26, President Joe Biden is expected to announce a new proposed rule that would require airlines and travel sites to be more transparent about additional fees. A pilot is pictured here at LaGuardia Airport in 2021. (Timothy Clary/AFP/Getty Images)

U.S. President Joe Biden on Monday is expected to announce a new proposed rule that would require airlines and travel sites to be more transparent about additional fees that customers could be charged, including for baggage, flight changes or cancellations, a White House official tells CNN.

Under the proposed rule, airlines and travel sites "would have to disclose up front – the first time an airfare is displayed – any fees charged to sit with your child, for changing or cancelling your flight, and for checked or carry-on baggage," according to a draft news release by the Department of Transportation shared with CNN.

At a meeting with top Cabinet and administration officials on Monday, Biden is expected to call on other agencies to take similar action to increase transparency and limit add-on fees for American consumers.

The President will highlight in his speech how companies across industries impose "hidden fees that don't allow customers to see the full price of what they're buying," the White House official said.

"This is going to stop the airlines from hiding the true cost of your ticket, so that when you're searching you find the actual best deal – saving Americans money and spurring more competition on prices," one White House official told CNN. "Those fees add up. In 2021, top airlines made nearly $700 million just on cancellation and change fees alone."

Passengers deserve to know the true cost of their flights before they buy a ticket, Transportation Secretary Pete Buttigieg said in a statement on Sunday.

"This new proposed rule would require airlines to be transparent with customers about the fees they charge, which will help travellers make informed decisions and save money," he said.

Airlines for America, a trade group that represents major US air carriers, told CNN in a statement: "A4A member passenger airlines – which are fierce competitors – already offer transparency to consumers from first search to touchdown. US airlines are committed to providing the highest quality of service, which includes clarity regarding prices, fees and ticket terms."

"A4A passenger carriers provide details regarding the breakdown of airfares on their websites, providing consumers clarity regarding the total cost of a ticket. This includes transparency regarding taxes and government fees on airline tickets, which account for more than 20% of many domestic one-stop, round trip tickets."

Tens of thousands of flight cancellations and delays this summer prompted Buttigieg to direct the Department of Transportation to publish a new online dashboard to allow passengers to find comparative information on what each of the large US airlines provides to passengers when delays or cancellations are caused by factors within the airlines' control. Several major US carriers updated their policies in response to calls from DOT for more transparency. Airlines have struggled with staffing shortages and summer weather.

Monday's meeting is scheduled to be the third gathering of the White House Competition Council, which was formed last fall and is charged with promoting competition across the US economy and lowering costs for American families. The group consists of eight Cabinet members and the chairs of seven independent agencies.

Meeting participants are expected to include Buttigieg, Secretaries Janet Yellen of Treasury, Lloyd Austin of Defense, Tom Vilsack of Agriculture, Xavier Becerra of Health and Human Services, Director of the Office of Management and Budget Shalanda Young and Chair of the Council of Economic Advisers Cecilia Rouse.

Two Mounties on trial in the death of an Alberta man have been found not guilty of manslaughter and aggravated assault.

Quebec's legislature has passed a law putting an end to the requirement that members swear an oath to the King.

An oil spill in a creek in northeastern Kansas this week is the largest for an onshore crude pipeline in more than nine years and by far the biggest in the history of the Keystone pipeline, according to federal data.

A security breach linked to Ontario’s COVID-19 vaccine portal exposed the personal information of thousands of people in the province.

No decision on landfill search, Winnipeg Police Board considering outside help

Decisions on next steps in a potential search for the remains of two Indigenous women believed to be at a landfill outside Winnipeg are being worked through with the option of bringing in outside help.

The Ikea monkey was spotted 10 years ago. This is where he is now

A monkey cloaked in a tiny shearling coat was found roaming an Ikea in Toronto 10 years ago to date.