Biden Republicans? Some in GOP open to president's agenda 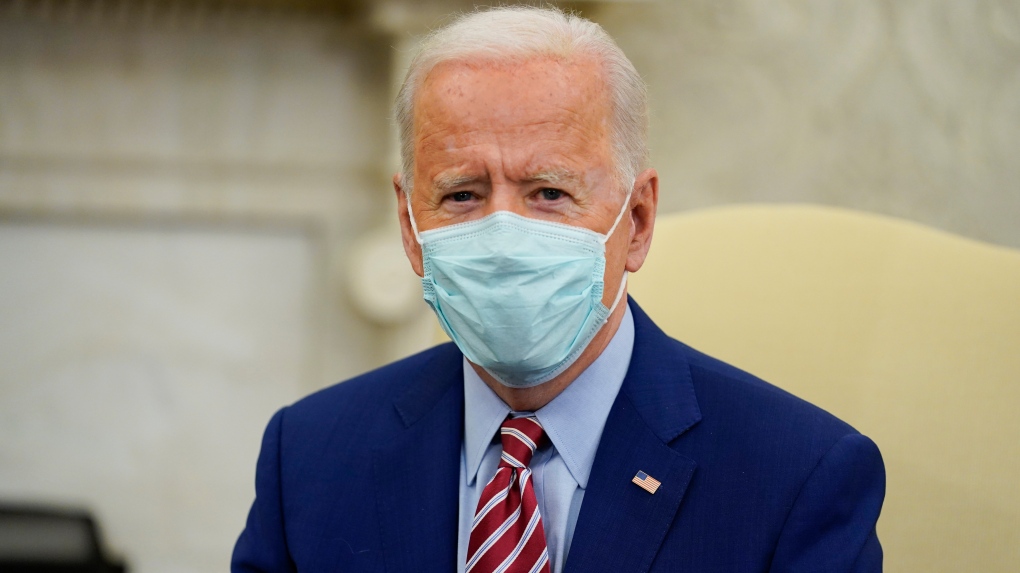 In this file photo, U.S. President Joe Biden speaks during a meeting with lawmakers on investments in infrastructure, in the Oval Office of the White House, Thursday, Feb. 11, 2021, in Washington. (AP Photo/Evan Vucci)

A solid Republican voter for the past four decades, the 69-year-old quickly regretted casting his 2016 ballot for Donald Trump. When Trump was up for reelection last year, Copan appeared on roadside billboards across North Carolina, urging other Republicans to back Democratic rival Joe Biden.

Nearly three months into the new administration, Copan considers himself a "Biden Republican," relieved by the new president's calmer leadership style and coronavirus vaccine distribution efforts. Copan is the type of voter Biden is counting on as he pushes an agenda that's almost universally opposed by Republicans in Washington.

As Biden meets Monday with a bipartisan group of lawmakers to discuss his massive infrastructure plan, he's betting that the GOP's elected leaders are making a political miscalculation. The party's base remains overwhelmingly loyal to Trump, but Biden believes that Republican leaders are overlooking everyday Americans eager for compromise and action.

The question is whether there are enough Republicans like Copan.

"I really want there to be a good two-party system," said Copan, a former senior officer with the American Gas Association. His vote for Biden for president was his first for a Democrat since Jimmy Carter in 1976 but probably won't be his last. "I think there's a lot of people like me out there."

The ranks of Republican crossovers may be smaller than he would expect. Only 8% of Republicans voted Democratic in November's presidential race, according to AP VoteCast, a survey of the electorate nationwide.

In Biden's early months, Stephens sees the president catering more to the left than to conservative Democratic voters.

As president, Biden has expressed openness to working with Republicans. But he also helped ram through Congress the largest expansion of the social safety net in a generation as part of a coronavirus relief and stimulus package that didn't get a single Republican vote. He's now calling for spending trillions more on infrastructure, pushing a proposal meant to appeal to people in both parties.

Biden has so far enjoyed wide, relatively bipartisan support, with 73% of Americans approving of his coronavirus response and 60% approving of his handling of the economy. Still, favourable ratings don't always translate to votes: Of the more than 200 counties that supported Obama in 2012 and Trump in 2016, only about 25 went back to Biden in November.

The limited crossover power is even true in places that were bright spots for Democrats. Biden flipped longtime Republican stronghold Kent County, Michigan, which includes Grand Rapids, Gerald Ford's hometown. But those gains were built more on the local electorate getting younger than any measurable surge of conservatives backing Biden.

Joe Farrington ran for Congress as a "working class Republican" and owns a bar in Lyons, Michigan, about 50 miles east of Grand Rapids, in Ionia County, where Trump won nearly two-thirds of the vote. During a candidates' debate, he called Trump "somewhat of an idiot" -- and finished fourth in a five-way primary race.

He says Biden is doing the right thing on infrastructure, social issues and the environment. Still, Farrington said he'll remain loyal to the Republican Party -- even if he runs for Congress again in 2022 in opposition to much of what it stands for. "We need to change it from within," he says.

Scott Carey, former general counsel of the Tennessee Republican Party, wrote an op-ed in October saying he was voting for Biden. He's been mostly satisfied so far -- but not about to become a born-again Democrat. He worries about tax increases and government overreach.

"I don't see myself becoming a big Harris, or certainly a Bernie fan or anything like that," Carey said of Vice-President Kamala Harris and liberal Sen. Bernie Sanders. If Biden decides not to seek a second term in 2024, Carey said, he'd be more excited about Republicans, including "some governors I've never even heard of who would step up post-Trump and bring us back to sound governing policies."

Others, though, say they've left the GOP for good.

Tom Rawles is an ex-Republican county supervisor in Maricopa County, which includes Phoenix and was critical in Biden carrying swing-state Arizona. After voting for Biden, Rawles registered as a Democrat.

"I'd rather fight philosophically within the Democratic Party than I would for character in the Republican Party, because there's none there," said Rawles. He's 71 and said he doesn't expect the GOP to return to principles he can support in his lifetime.

Rawles and his wife spent months before the election sitting in their driveway along a busy suburban Phoenix road, hoisting Biden signs for four hours a day. Some drivers stopped to chat or offer water. Others made rude gestures or screamed that they were interlopers from fiercely blue California.