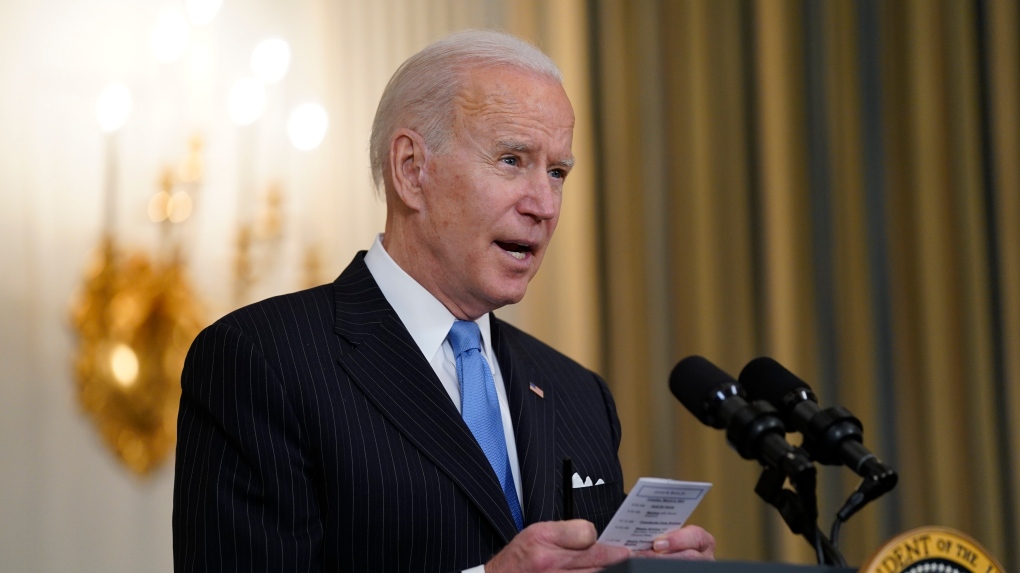 WASHINGTON -- U.S. President Joe Biden plans to lay out new steps to stem a rising national tide of violent crime, with a particular focus on gun violence, as administration officials brace for what they fear could be an especially turbulent summer.

The worry over crime is real and believed to be fueled by the pandemic, which has created economic hardship, displacement and anxiety.

But there are also tricky politics at play. The spike in crime has become a Republican talking point and has been a frequent topic of conversation on conservative media.

White House aides believe that Biden, with his long legislative record on crime as a former senator, is not easy to paint as soft on the issue, and the president has been clear that he is opposed to the "defund the police" movement, which has been effectively used against other Democrats to paint them as anti-law enforcement.

But Biden also is trying to boost progressives' efforts to reform policing. And while combating crime and reforming the police don't have to be at odds with each other, the two efforts are increasingly billed that way.

In a speech on Wednesday, Biden is to unveil a series of executive orders aimed at reducing violence, and he will renew his calls for Congress to pass gun legislation, aides said. Ahead of the speech, the Justice Department announced new strike forces aimed at tackling gun trafficking in five cities.

The White House also planned to convene a meeting Wednesday with Attorney General Merrick Garland; the Democratic mayors of Baltimore and Miami-Dade County and the Republican mayor of Rapid City, South Dakota; the Democratic attorney general of New Jersey; the police chief in Baton Rouge, Louisiana; and community activists.

White House staff members have also been in touch with legislators and congressional staff.

"Yes, there need to be reforms of police systems across the country. The president is a firm believer in that," White House press secretary Jen Psaki said Tuesday. "But there are also steps he can take as president of the United States to help address and hopefully reduce that crime. A big part of that, in his view, is putting in place gun safety measures ... using the bully pulpit but also using levers at his disposal as president."

In April, Biden announced a half-dozen executive actions on gun control, including cracking down on "ghost guns," homemade firearms that lack serial numbers used to trace them and that are often purchased without a background check.

There is also new federal funding from the US$1.9 trillion COVID-19 relief package directed toward municipal governments, allowing them to keep more police officers on the street. Aides said Biden would also urge a swift confirmation of his choice to head the Bureau of Alcohol, Tobacco, Firearms and Explosives.

But Biden is limited in his power to act alone. The House passed two bills requiring background checks on all firearms sales and transfers and allowing an expanded 10-day review for gun purchases. But that legislation faces strong headwinds in the Senate, where some Republican support would be needed for passage.

"It is staggering. It is sobering," she said at a violent-crime forum held by the Washington-based Police Executive Research Forum. "And it's something that DOJ is committed to do all we can to reverse what are profoundly troubling trends."

If the federal effort sounds familiar, it is. Federal operations have often been launched to help cities facing spiking crime. President Donald Trump announced something similar last year when he and then-Attorney General William Barr launched Operation Legend, named for a boy who was shot to death in Kansas City, Missouri.

In that effort, hundreds of investigators were deployed to nine cities with rising crime, prioritizing the arrest of violent criminals.

Trump, though, laid blame for the spike in crime on protesters who demonstrated against police brutality following the killing of George Floyd in Minneapolis.

He claimed that Democrats were allowing crime to run amok in their cities. But despite pockets of violence in both Democratic- and Republican-run cities, the protests were mostly peaceful. A Harvard Radcliffe Institute study found there were no injuries reported in 97% of the events. Still, Republican leaders continue to echo Trump's claims.

And while crime is rising -- homicides and shootings are up from the same period last year in Chicago; Los Angeles; Minneapolis; Portland, Oregon; Baltimore; Baton Rouge, Louisiana; and Houston -- violent crime overall remains lower than it was a decade ago or even five years ago. And most violent crimes plummeted during the first six months of the pandemic, as people stayed indoors and away from others.

Crime started creeping up last summer, a trend criminologists say is hard to define and is likely due to a variety of factors such as historic unemployment, fear over the virus and mass anger over stay-at-home orders. Public mass shootings have also made an alarming return.

"Many of us -- if not most of us -- are seeing a rise in crime, while at the same time, we're hearing calls for reform," Baltimore Police Commissioner Michael Harrison said of cities in remarks at the police forum. "And some of those calls are to the extreme of dismantle and defund ... while all of the same time we're sworn to protect the people."

Interest in guns, too, is on the rise. The number of people stopped from buying guns through the U.S. background check system hit an all-time high of more than 300,000 last year amid a surge of firearm sales. And several states have passed laws barring federal gun control laws from taking effect.

Louisville Metro Police Chief Erika Shields said lax gun laws and the presence of illegal guns on the streets are compounding the violence.

"When everyone can have a gun, they tend to," she said. "And it just leads to more illegal guns on the street."

The Justice Department recently announced a sweeping investigation into the Louisville police over the March 2020 death of Breonna Taylor, who was shot to death by police during a raid at her home. A similar investigation was launched into the Minneapolis police force.

The rise in violence comes against the backdrop of a national debate on policing and as a police reform bill is being crafted in Congress. Psaki on Tuesday dismissed suggestions that a presidential event focused on cracking down on crime would undermine that legislative effort.

As a senator, Biden wrote several major anti-crime packages, including a 1994 bill that contained provisions now viewed by some as an overreaction to the crime spikes in the 1980s and 1990s. Critics say those bills helped lead to mass incarceration of Black Americans, and Biden's involvement became a flashpoint in his 2020 campaign.

Biden has expressed second thoughts about some aspects of the legislation, and he has acknowledged its harmful impact on many Black Americans.

But he and his allies still hold out the law's provisions to address domestic violence, ban assault weapons and finance community policing.