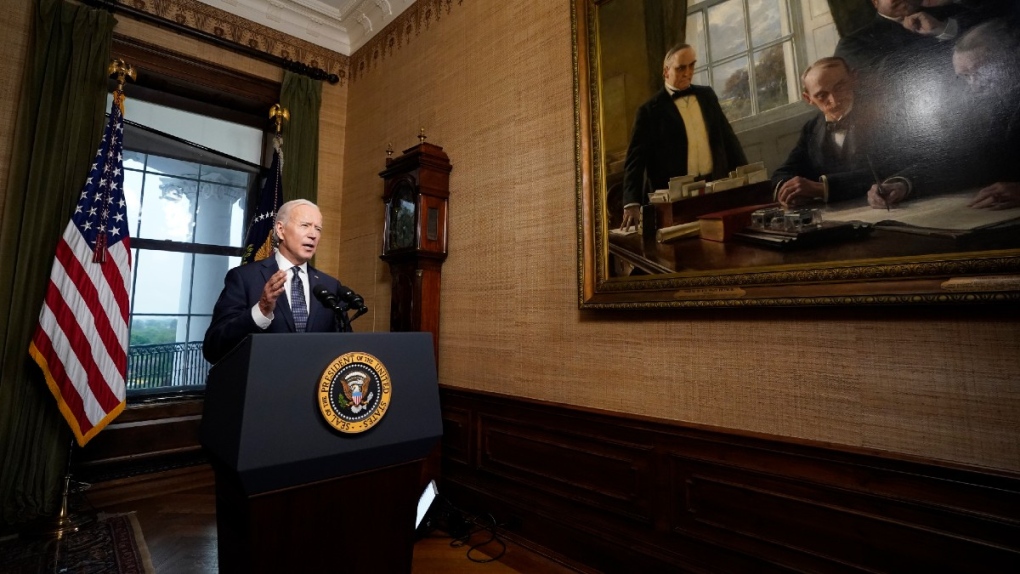 The Biden administration on Thursday imposed new sanctions on Russia and expelled diplomatic personnel in response to election interference and cyber hacks by the country.

"President Biden signed a new sanctions executive order that provides strengthened authorities to demonstrate the Administration's resolve in responding to and deterring the full scope of Russia's harmful foreign activities," the White House said in a news release.

As a part of the announcement, the U.S. formally named the Russian Foreign Intelligence Service as the force behind the SolarWinds hack that affected the federal government and wide swaths of the private sector.

National security adviser Jake Sullivan told CNN's John Berman on "New Day" that Biden's goal is to "provide a significant and credible response, but not escalate the situation."

"We believe that all together both the actions we are taking today and that broader diplomacy can produce a better set of outcomes for U.S.-Russia relations," Sullivan said.

Sullivan said Biden and Putin "were direct with one another, they understood one another" during their phone call on Tuesday.

"President Biden made no bones about the fact we will be taking actions this week, but he also indicated that he wants to get to that stability in this relationship, and he believes that if President Putin is prepared to do that as well, we can find a course ahead that does not lead to a cycle of confrontation," Sullivan said.

CNN previously reported the Biden administration was expected to announce sanctions as soon as Thursday targeting Russian individuals and entities, in addition to new financial restrictions and the expulsion of as many as a dozen Russian diplomats from the U.S., in response to the hack of SolarWinds and election interference, according to two sources familiar with the plans.

One reason the rollout of these actions has taken longer than anticipated is because the White House was not satisfied with the options the State Department initially presented and wanted more expanded sanctions, a US official familiar with the plans said. The White House announced an intelligence review of Russia's "reckless and adversarial actions" in a wide array of areas during Biden's first week in office.

Another source familiar tells CNN that the administration is expected to take measures against Russia on Thursday and is coordinating with European allies.

These actions will be rolled out in the form of an executive order from Biden as well as sanctions coordinated with the State Department and the Treasury Department, the officials said. State Department officials have called U.S. allies and are preparing for potential Russian responses.

The Russian diplomats who are being expelled are based in Washington, DC, and New York, and they will have 30 days to leave the country, the U.S. official familiar with the plans explained.

New financial restrictions, consisting of efforts to target Russian sovereign debt, will be put in place, which could hurt Russia's economy.

It is unclear if these sanctions will be enough to change Russian behavior, the officials said.

The White House and the State Department did not immediately respond to a request for comment.

The Biden administration vowed to respond to Russia's aggressions against the US and its allies in the early days of Biden's presidency. Biden confronted Putin over a range of issues, from a recent massive cyberattack to the suspected poisoning of the country's leading opposition figure, during their first phone call. And the Biden administration has already rolled out sanctions for the jailing and poisoning of opposition leader Alexey Navalny.

Hitting back at Russia also comes as the Biden administration has sought to keep open channels of diplomatic communication and to work with Russia when it is in the US' interest. Biden put that approach on display this week when he proposed a summit with Putin during their second phone call.

The Biden administration also recently decided to keep the Trump-appointed US ambassador on the job in Moscow for the foreseeable future and invited Putin to a climate change conference later this month.