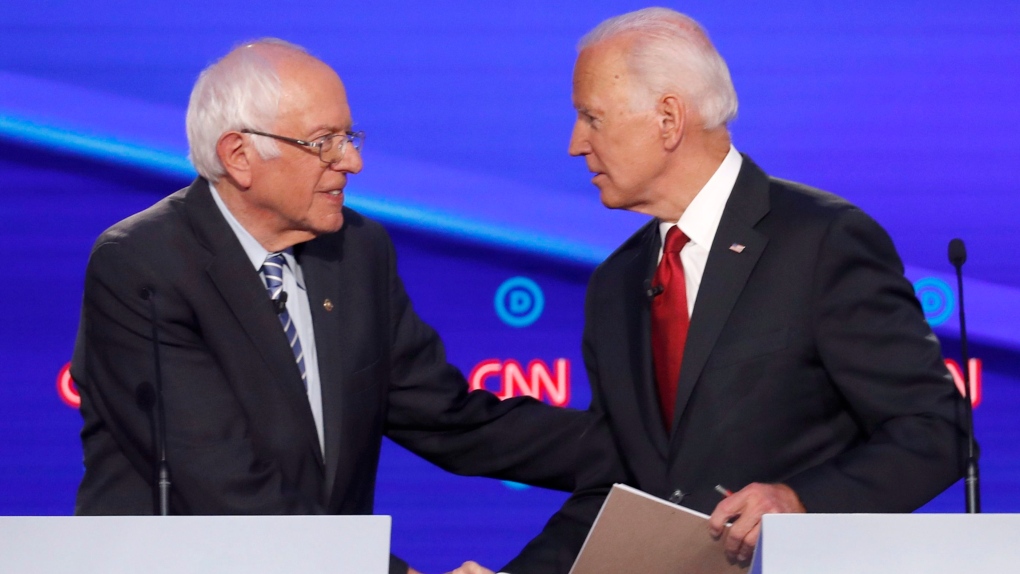 MARSHALLTOWN, Iowa -- Bernie Sanders insists he feels better than ever less than a month after heart surgery, but his return to the campaign trail this week sparked new questions about the unusually old age of the Democratic Party's leading 2020 presidential candidates.

Both Sanders, 78, and Joe Biden, 76, suggest their age isn't a major issue, but voters, particularly older voters, aren't so sure.

Gordon Lundberg, a 71-year-old retired Lutheran pastor from Ames, said candidates' health is a key issue for him because he understands how it feels to age. He's leaning toward Sen. Elizabeth Warren of Massachusetts because, even though she's 70, "she's the most liberal and she's not got one foot in the grave yet."

"Bernie's just too darn old. And so is Biden," Lundberg said. "They look old, they sound old, they are old. They fall in the shower, and they get heart attacks!"

Lundberg is not alone.

Polling has suggested that a significant number of Americans believe a candidate in his or her late 70s is too old to be president. If elected, Sanders would take office having already exceeded the average U.S. life expectancy of 78.6 years, according to data from the Centers for Disease Control and Prevention's National Center for Health Statistics. Biden would be just a few months away.

Warren would be the oldest new president in history, eclipsing Trump, who himself eclipsed Ronald Reagan. Biden and Sanders would be older on their first day in office than Reagan, a two-term president, was on his last.

While Biden, the former vice-president, has often laughed off questions about his age, the issue is one that Sanders has been forced to confront more directly as he returned to Iowa this week. Sanders, a senator from Vermont, is travelling with his wife and campaign manager, whose responsibilities include ensuring that he take modest precautions not to over-exert himself, takes daily walks of at least half an hour with no phone calls and sticks to a healthier diet.

"He wants to run," said campaign manager Faiz Shakir, who said he would likely accompany Sanders on the campaign trail for the next month. "Our job is to make sure he knows he's in a marathon, not a sprint."

Sanders opened up about his health during an interview at a coffee shop in Des Moines, one of several he conducted this week as he works to convince voters in the first states on the 2020 presidential primary calendar that he's physically able to beat President Donald Trump next fall and assume the demands of the presidency.

Sanders told The Associated Press that he was looking forward to "a 100 per cent recovery -- full recovery."

At a subsequent campaign appearance in Marshalltown, he confronted the age question directly without being asked.

"I've been criticized for being old. I plead guilty. I am old," Sanders said, sparking laughter and applause in the audience.

And at a Friday event in Newton, Iowa, he insisted that his advanced age offered some advantages. Specifically, people have had decades to study him and his policies. He has supported Medicare for All, for example, for three decades.

"Having a long record gives people the understanding that these ideas that I'm talking about, they're in my guts, they're in my heart," he charged. "This is who I am as a human being."

Many in the audience applauded the message. But after the Marshalltown event, not everyone was cheering.

"I know as I age, everything isn't quite as sharp. That's the reality of age. I can feel it in my own body," Canade said. "I think Bernie's doing well for his age."

Meanwhile, Biden called his age "a legitimate question" in an interview days after entering the presidential race in April and said it's up to voters to "watch me" and decide for themselves.

Since then, Biden has not been forced to confront the age question as often as Sanders, despite frequent gaffes on the campaign trail. The former vice-president has frequently appeared to mix up dates, offer outdated pop culture references and forget his words.

He said in a new "60 Minutes" interview that he's not worried about the gaffes and doesn't think the American public is, either.

"The American people know who Joe Biden is," he said, according to excerpts released Friday by CBS. "That doesn't affect the way they're going to vote, one way or the other."

Biden also dismissed questions about his age, saying, if anything, it was an advantage.

"With age comes experience, with experience comes wisdom, and with wisdom comes judgment," Biden said in the "60 Minutes" interview, set to air Sunday.

He promised earlier in the month to release his health records to help demonstrate his physical readiness for the nation's top job.

While national polls suggest Biden is doing well among older voters, on the ground in the state that will hold the nation's first presidential primary contest, Democrats see age as an issue for Biden and Sanders.

Kathy Judge, a 58-year-old nurse from Ames, went so far as to call Sanders and Biden "very self-centred and very selfish by staying in the race" when, she said, there are questions over whether they're "physically capable" of finishing the run.

As an older individual herself, she said, she sees their ages wearing on them.

"Bernie Sanders has already had a heart attack! Joe Biden can't remember what day it is! Now, I can't either some days, I will admit that, but we need someone who is sharp and thinks on their feet and doesn't fumble words," said Judge, who supports 50-year-old Cory Booker, the New Jersey senator.

At a Biden event over the summer in Manning, Donna Forman, a 72-year-old retiree, said the former vice-president is in her top three, along with Booker and 59-year-old Sen. Amy Klobuchar of Minnesota. But the one major concern she has about Biden is his age.

"Because I know people that are old -- including myself," she said. "I'm getting there. And I think Donald Trump is a perfect example of why nobody over 70 should run for anything."