Bercow speaks out on Trump, dubs Brexit a 'historic mistake' 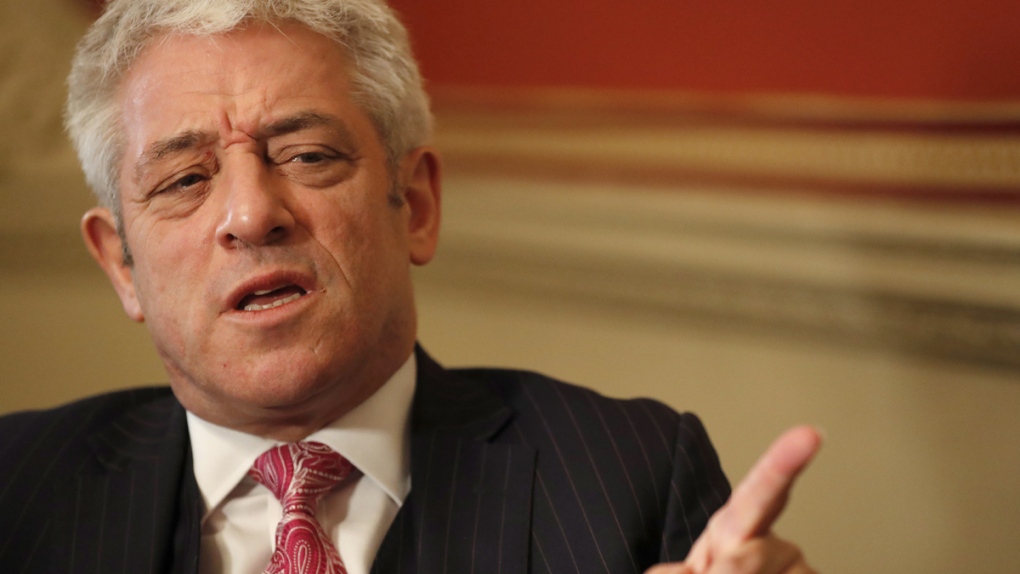 John Bercow during an interview with Associated Press in London, on Nov. 7, 2019. (Frank Augstein / AP)

LONDON -- John Bercow is not a man of few words.

And now that he has been freed from the enforced neutrality of his job as speaker of Britain's House of Commons, he has quite a few things to say. Brexit? A historic mistake. Donald Trump? A leader who has said "loathsome and despicable" things.

"I am liberated now to say what I think," said Bercow, who retired last week after a decade running the daily business and debates of Parliament's lower chamber. The speaker's job made Bercow a global celebrity, as people around the world tuned in to watch him referee bruising parliamentary battles over Brexit with booming cries of "Or-derrr!"

He thinks leaving the European Union is Britain's "biggest foreign policy blunder" since the Second World War, an error that will leave the country weakened economically and diplomatically.

He's not arguing that Brexit would "spawn mass poverty," though most economic forecasts say it would damage the economy.

"But I think that we will suffer in trade terms and suffer in terms of global standing and influence," Bercow said. "The best course for the U.K. is to remain."

Bercow's words will confirm the suspicions of critics who accused him of favouring Brexit opponents while he was in the speaker's chair.

He denies showing bias -- "I facilitated all the voices and all the views on Brexit" -- but fully acknowledges he interpreted Parliament's rules in ways that let legislators take control of the agenda at key points.

The upshot is that, three and a half years after British voters chose 52%-48% to leave the EU, multiple government attempts to complete Brexit have failed.

Some British politicians -- even some of those who voted in 2016 to remain in the bloc -- now say the country must honour the result of the referendum. But Bercow insists the 2016 vote "isn't the final word on the subject" and says it would be democratic to hold a new public vote on EU membership.

"In 2016, people voted by a narrow margin for departure, but they didn't vote for a destination," said Bercow, who is also stepping down as a member of Parliament after 22 years. "There wasn't a consensus and there isn't a consensus now. And there's great disagreement as to what sort of Brexit there should be."

Britain is currently in the midst of an election campaign dominated by Brexit, with all 650 seats in the House of Commons up for grabs in the Dec. 12 vote.

British Prime Minister Boris Johnson pushed for the early vote after Parliament thwarted his plans to take Britain out of the EU as scheduled on Oct. 31. Johnson hopes his Conservatives can win the vote, pass his Brexit divorce deal and get the country out of the 28-nation bloc by the next deadline of Jan. 31.

Bercow says it would be "perfectly reasonable" for Parliament to put Johnson's deal back to the people in a referendum.

"I don't see how more democracy can be undemocratic," he added.

A London cab driver's son who began his political career in the 1980s as a right-wing acolyte of Conservative Prime Minister Margaret Thatcher, Bercow has become a hero to liberals in Britain and abroad.

He says his political views shifted when he began to see the Conservatives as -- in a phrase coined by former Prime Minister Theresa May -- "the nasty party." He thinks the greatest achievement of Britain's recent Conservative governments was legalizing same-sex marriage.

In Parliament, he's proud to have helped set up a nursery for the children of lawmakers and staff.

Bercow angered some on the political right by saying in 2017 that Trump shouldn't be allowed to address Parliament, an honour given to some of his predecessors, including Barack Obama.

Bercow says at the time "there was intense controversy about (Trump's) alleged sexism, racism and disparagement of an independent judiciary, and it was my strong sense that he hadn't earned the honour of being invited to address both houses of Parliament."

He said Trump's behaviour since then had only reinforced his conviction that he'd made the right call.

"I thought recently when President Trump made extremely derogatory remarks about some of his female opponents, that was hateful, loathsome and despicable," Bercow said. "People in positions of power also have a responsibility to behave properly, and to show respect, and to disagree agreeably."

Bercow's international celebrity has been stoked by his flamboyant verbal style in Parliament and fondness for distinctively obscure words like "chuntering" and "medicament."

"It is just me," said Bercow, who for this interview has swapped the speaker's black robes for a three-piece pinstriped suit. "It wasn't an act. It wasn't a performance. ... It was me, reacting spontaneously."

A busy public speaking career beckons for Bercow, along with a book to be published next year. He also plans to devote more time to two of his passions: watching Roger Federer play tennis and attending Arsenal soccer matches.

He knows he has critics, but says he doesn't lose any sleep over them.

"I am something of a Marmite character," he said, in reference to the tangy British breakfast spread that has a love it-or-hate it reputation. "But, you know, can I bear the burden of being regarded as a Marmite character with stoicism and fortitude? I think I can."