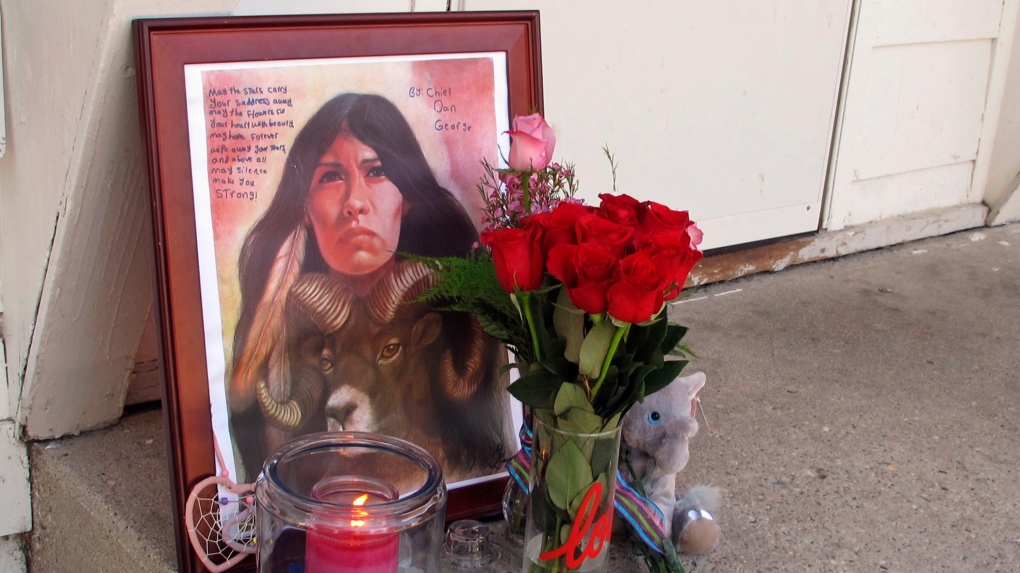 In a Monday, Aug. 28, 2017 file photo, a makeshift memorial to Savanna Greywind featuring a painting, flowers, candle and a stuffed animal is seen on Monday, Aug. 28, 2017, in Fargo, N.D., outside the apartment where Greywind lived with her parents. Republican U.S. Sen. Lisa Murkowski from Alaska is taking up the cause for a bill aimed at helping law enforcement with cases of murdered and missing indigenous women. Former North Dakota Democratic Sen. Heidi Heitkamp introduced and helped pass Savanna's Act in the Senate before she lost election, but it was blocked in the House by a retiring Republican. (AP Photo/Dave Kolpack, File)

FARGO, N.D. -- A bill originally meant to help law enforcement investigate cold cases of murdered and missing indigenous women that has floundered in Congress for two years may have the missing ingredients to become law -- money and muscle.

The money comes from an appropriations subcommittee chaired by Alaska Republican Sen. Lisa Murkowski, who told The Associated Press that for the first time funding is being directed specifically to murdered and missing indigenous people. The muscle comes from the White House and specifically the Department of Justice, which last week unveiled a plan that would investigate issues raised in the bill like data collection practices and federal databases.

"The great thing about Lisa's work has been her willingness to not just pass this law but make sure there's an appropriation for it," Heitkamp said Friday.

The bill is named for Savanna Greywind, a Native American North Dakota woman who was killed in 2017 when her baby was cut from her womb. The Senate Committee on Indian Affairs, chaired by North Dakota Republican John Hoeven, earlier this month advanced another version of bill to the full Senate for consideration.

Gloria Allred, an attorney for Greywind's family, said they are "encouraged by what appears to be the strong efforts of U.S. Sen. Lisa Murkowski's commitment to gather support for this bill in order for it to be signed into law one day."

Savanna's Act passed the Senate in 2018 but was blocked in the House by former Virginia Rep. Bob Goodlatte because he said it would hurt some agencies that have no link to tribal communities. Heitkamp said a new companion piece to the bill, the Not Invisible Act, has helped broaden the scope of the initiative and address concerns raised by Goodlatte.

"We are making some headway," Murkowski said. "Not fast enough, but I think we're making the efforts that are going to make a difference in the long haul. The legislative initiatives that we have used have successfully raised the issue of awareness."

Savanna's Act was introduced in the House earlier this year. Three of its co-sponsors are Native American -- Sharice Davids of Kansas and Tom Cole and Markwayne Mullin of Oklahoma.

This story has been corrected to show that Sharice Davids represents a district Kansas, not Wisconsin.