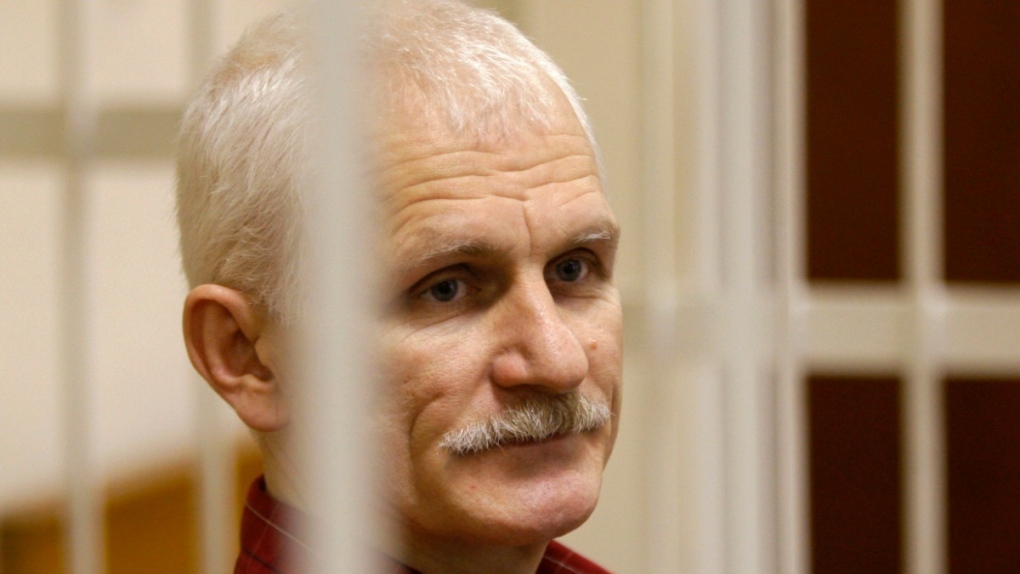 Ales Bialiatski in a defendants' cage during a court session in Minsk, Belarus, on Nov. 2, 2011. (Sergei Grits / AP)
VILNIUS -

Nobel Peace Prize winner Ales Byalyatski chose to return to his native Belarus despite warnings he faced jail there in order to help civil society by distributing international aid donations, a friend of the human rights activist said.

Byalyatski won the prize alongside Russian rights group Memorial and Ukraine's Center for Civil Liberties on Friday in what will be seen by many as a condemnation of Russian President Vladimir Putin and Belarus President Alexander Lukashenko.

"He said - I have committed no crime," Vytis Jurkonis, head of the Vilnius office of Freedom House, a U.S. government-funded human rights advocacy organization, told Reuters in the Lithuanian capital.

Jurkonis, who first met Byalyatski in 2008 and worked in cooperation with him for years, warned him that Lithuanian authorities had accidentally provided Belarus with his banking details in Lithuania.

On his return from a visit to Lithuania Byalyatski was sentenced to 4-1/2 years in jail in 2011 for alleged evasion of tax on money in his Lithuanian bank accounts. The money was provided by international organizations to fund civil society in Belarus. Byalyatski distributed it there at personal risk to himself.

The funds helped hundreds of people support families after their breadwinners were arbitrarily jailed in Belarus, as well as supporting human rights organizations after their offices were raided and equipment confiscated, Jurkonis said.

"It's wired by the international foundations and then you are cashing it out and bringing it to the those in need, to the vulnerable people," Jurkonis said.

"This is something which is persecuted by the regime because they want to pressure the political prisoners, the families, the colleagues and make sure that their lives are ruined."

Byalyatski was freed in 2014 but jailed again in 2021, once more for alleged tax evasion. He continued working as a human rights campaigner and took part in mass anti-government protests in Minsk in 2020 which saw tens of thousands people take to the streets for months to demand Lukashenko resign.

Belarus authorities are likely to try to extract concessions from the global community to release Byalyatski, as they did many times before with high-profile prisoners, Jurkonis said.

"Our friendship is bittersweet, because I've seen him in jail a few times, I know his colleagues who are also in jail, I know his family," he added.

"If Byalyatski was here, he would, I'm sure, say that it's an award to the all Belarusian human rights defenders and also to those they were trying to defend."

"I think he would say that he should be the last to leave jail, making sure that all other political prisoners are released as well."

MPs are marking the 33rd anniversary of the École Polytechnique de Montreal shooting that left 14 women dead, while debate over the Liberal government’s gun control legislation — including which specific firearms should be restricted — is ongoing.