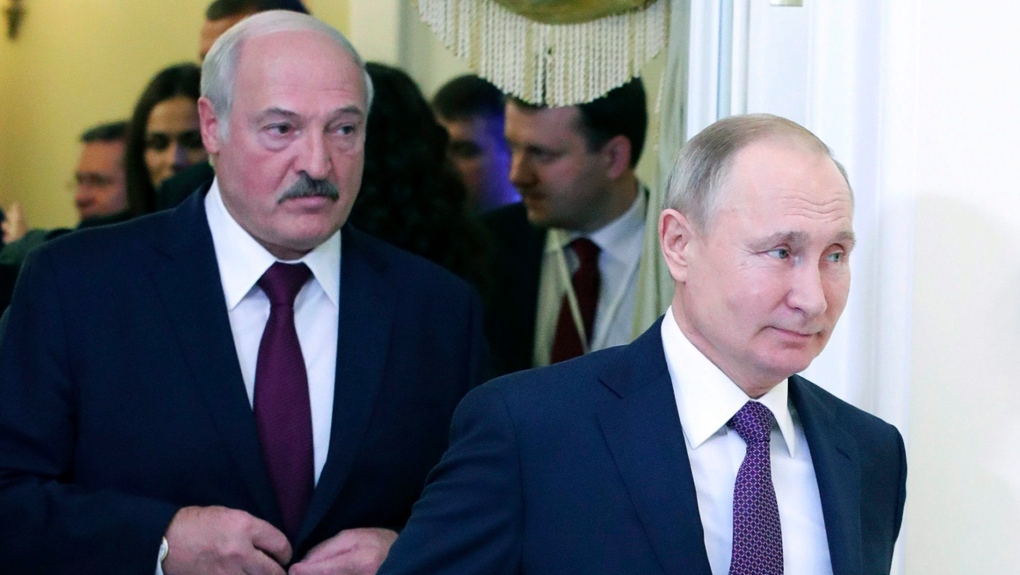 KYIV, UKRAINE -- The president of Belarus on Friday accused Moscow of pressuring his country to merge with Russia, and vowed not to let it happen.

Talking to workers of a paper plant in eastern Belarus, Alexander Lukashenko lambasted Russia, the country's main provider of cheap oil and gas, for halting oil supplies in order "to dissolve Belarus ... in the brotherly Russia."

The statement comes amid stalled talks on further strengthening economic ties between two countries, seen in Belarus as Moscow's plot to swallow its post-Soviet neighbour.

"We have our own country, we're sovereign and independent. With our brains and hands, we earn what we can, we're building our own country. And we can't be a part of some other country," Lukashenko said. "I can't betray you and dissolve Belarus, even in the brotherly Russia."

Russia stopped supplying oil to its post-Soviet neighbour after Dec. 31. The two nations had failed to renegotiate an agreed oil price for this year during drawn-out negotiations on deepening the integration of their economies.

The Russian suspension did not affect oil crossing Belarus to Europe or the supply of natural gas, but had consequences for Belarus, which relies on Russia for more than 80% of its energy needs.

Lukashenko has since vowed to find alternative oil suppliers and said Friday that Belarus is currently negotiating additional supplies with the United States, Saudi Arabia and United Arab Emirates.

Earlier this week, Minsk announced the import of oil shipments from Norway.

"Americans, Saudi Arabia, the Emirates... I have a brilliant relationship with them, they say they will supply as much oil as needed," Lukashenko said, insisting that his intention not to concede to Russia's demands is "not a bluff."

The Kremlin has recently increased pressure on Belarus, raising energy prices and cutting subsidies. It argues that Belarus should accept greater economic integration if it wants to continue receiving energy resources at Russia's domestic prices.

Russian President Vladimir Putin held two rounds of talks with Lukashenko in December but they failed to agree on the closer ties and oil and gas prices.

Putin said Russia was not ready to "subsidize" energy supplies without more economic integration with Belarus, while Lukashenko insisted he would not sign off on the integration until the issues with oil and gas supplies were resolved.

The talks prompted fears in Belarus that the Kremlin is plotting to form a single state with Belarus to keep Putin in power well past the end of his term in 2024.

Lukashenko has repeatedly rejected the idea, saying that Belarus would never become part of Russia.

"Even if I agree to that, Belarusians would eat me alive within a year," he said Friday. "It's honourable to be the first (president of Belarus), but I sure don't want to be the last."