Bannon to French far-right party: 'Let them call you racist' 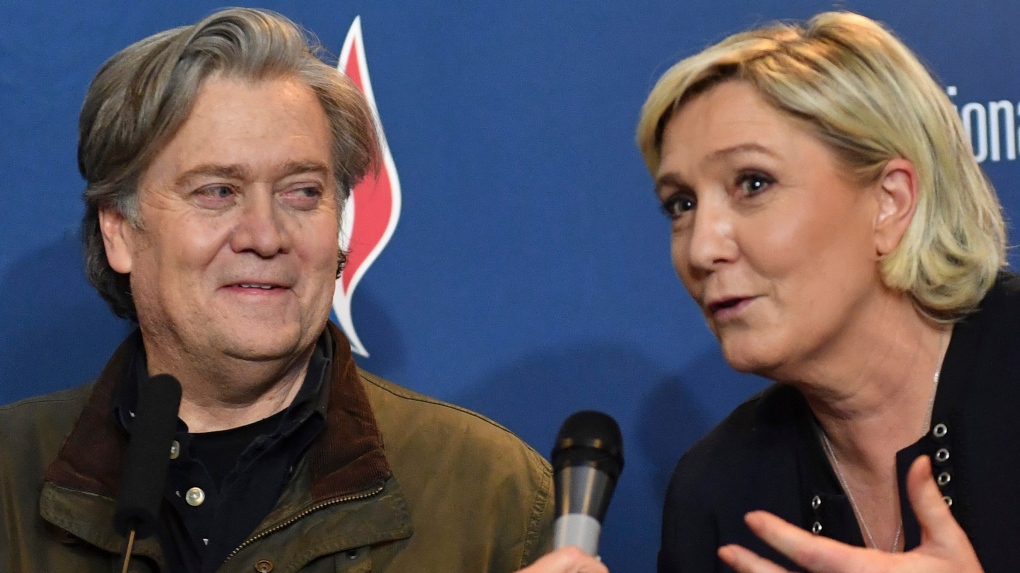 Bannon's appearance in France was part of a European tour as he seeks an international platform for his closed-borders, anti-foreigner message that helped Donald Trump win the U.S. presidency.

The National Front has never won the French presidency, and the congress in Lille is aimed at remaking its image after Le Pen's crushing defeat to independent, pro-globalization Emmanuel Macron in last year's presidential election.

But Bannon might have threatened Le Pen's makeover with his compliments for an extreme version of the National Front and lavish praise for Le Pen's more hard-line niece and rival.

His European tour centred on last weekend's Italian election, which Bannon called "an earthquake" after populist and anti-immigration parties outperformed traditional parties. The outcome has boosted far-right movements across Europe and was seen as a victory for the forces that elected Trump and voter approval for Britain to leave the European Union.

"History is on our side," Bannon said to hearty cheers.

He praised Le Pen's vision of a political spectrum that no longer spans left-right but puts nationalists versus globalists. Bannon gave his first European speech in Zurich earlier in the week and said Saturday that he was travelling the world to learn.

The European tour comes as Bannon's role in American politics is uncertain. He was ousted from the White House last year amid tensions and stepped down as chairman of Breitbart News Network in January after a public break with Trump.

In France, some warned that Bannon's support could damage Le Pen's efforts to cleanse the National Front of the racist stigma that has long clung to the party's image.

Le Pen defended inviting Bannon to the meeting, saying it was important to listen to the man who was "the architect of Donald Trump's victory" and has written about globalization, protectionism and giving to regular people the power that "has been practically illegally captured by the elite."

Bannon also used his visit to call Le Pen's niece Marion Marechal-Le Pen one of most important people in the world, according to French media.

Bannon has publicly praised Marechal-Le Pen in the past, and she galvanized the crowd at a recent convention of U.S. conservatives. She bowed out of politics after her aunt's presidential defeat, but is expected to come back in a new role.

Marine Le Pen wants to revive her own fortunes by changing the name of the National Front, the party co-founded by her father in 1972.

A new name, a new leadership structure and new bylaws are being unveiled at the two-day congress with the hope of making the party relevant again.

Le Pen, running as the only candidate for National Front president, said the changes amount to a "cultural revolution" so the reshaped party can "implant itself, create alliances and govern."

"We're at a turning point ... don't bury us," she said in an interview with France's Le Figaro newspaper published Friday.

The changes pave the way for a younger leadership circle to emerge, even if the party's ideological foundation remains unchanged: nationalist, identity-driven, anti-European Union, according to Jean-Yves Camus, an expert on the far-right.

The new moniker, if approved by members during a mail-in vote, will mark the ultimate break with Le Pen's father, who has called the idea a betrayal. Jean-Marie Le Pen also is to be scratched from the party's books along with his title of honorary president-for-life.

Since taking over the National Front's presidency in 2011, Marine Le Pen has worked to broaden the party's appeal by erasing the footprint of her father, who has multiple convictions for racism and anti-Semitism.

An election next year for members of the European Union's lawmaking arm will be the National Front's first chance to test its rebranding strategy. It won more seats in the European Parliament than any other French party in 2014.

However, Le Pen's credibility is among the potential obstacles to a possible far-right comeback: An annual poll published this week by the Kantar-Sofres-One Point firm showed Le Pen scoring lower on numerous questions.