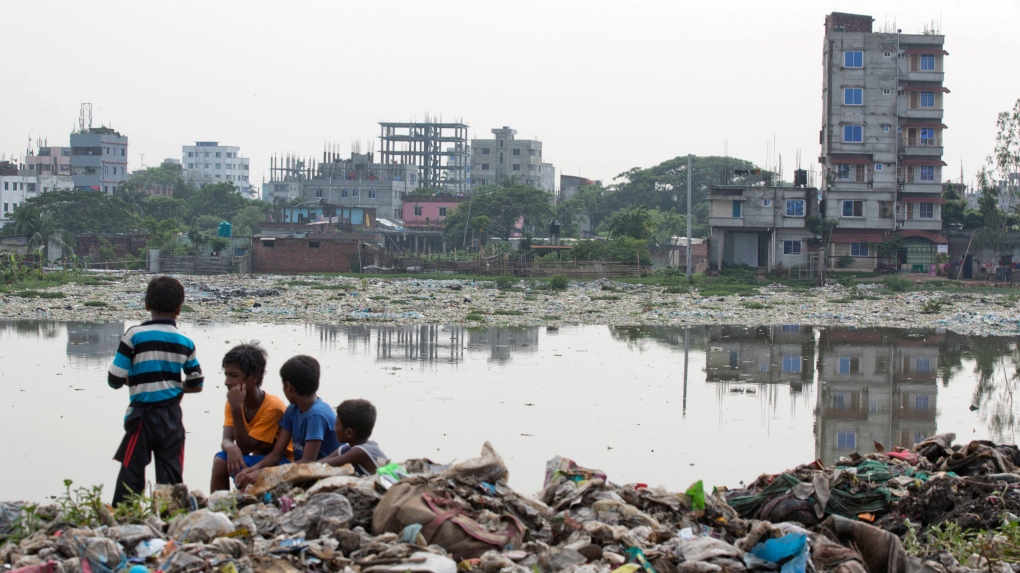 In this June 4, 2018, file photo, Bangladeshi children sit on garbage piled up by the river Buriganga in Hazaribagh area in Dhaka, Bangladesh. (AP Photo/A.M. Ahad, File)

Manzil Murshid, who filed a petition with the court seeking its intervention, said the factories are mainly small dyeing, tanning and rubber plants operating without approval from the Department of Environment. Such factories often are able to operate with the backing of influential politicians or by bribing government officials.

The court's decision Monday on the factories near the River Buriganga was hailed by environment activists despite some previous court orders that were not carried out by government authorities, Murshid said.

He said the decision came after the environment department submitted a report on 231 factories that operate illegally and contribute highly to the pollution. The court also asked the officials to prepare "a complete list of illegal factories or factories without effluent treatment plants" operating in and around Dhaka within three months.

"This is a good decision. The court has asked the authorities to disconnect water, electricity and other utility services for factories that are polluting the Buriganga," he told The Associated Press on Tuesday.

Amatul Karim, who represented the Department of Environment in the case, said the court's order came after a thorough examination of the history of the factories, the level of pollution of the river and overall damage to the environment.

"The Department of Environment has the power to shut the factories in question, but it was not easy to do so because of the complex legal procedures and other administrative limitations. So the High Court's decision will make the work easier for the department to go ahead," Karim said Tuesday.

Dhaka has four nearby rivers that are under threat from pollution. The Buriganga is a major gateway for the capital and connects the country's many southern coastal districts through a network of major rivers. When the Mughals established Dhaka as the capital in 1610, the banks of the Buriganga became a major location for trade. The river also was once Dhaka's main source of drinking water.

Many big tanneries polluted the Buriganga for decades, but under pressure from environmental groups at home and abroad, authorities relocated them to a distant site outside Dhaka in 2017.

"The Department of Environment does not need the court's decision to do the job, they have enough power, but I wonder why they don't do that on their own," she said. "The factories should be closed as they had enough time to become compliant but they failed."

Sheikh Rokon, general secretary of the Riverine People advocacy group, said Tuesday they welcomed the court decision and efforts in recent years by the administration of Prime Minister Sheikh Hasina to evict slums and illegal factories in Dhaka and elsewhere.

"The High Court's latest decision is a wider one. It has specifically targeted the polluters," he said. "We must save the rivers, they are our lifeline."