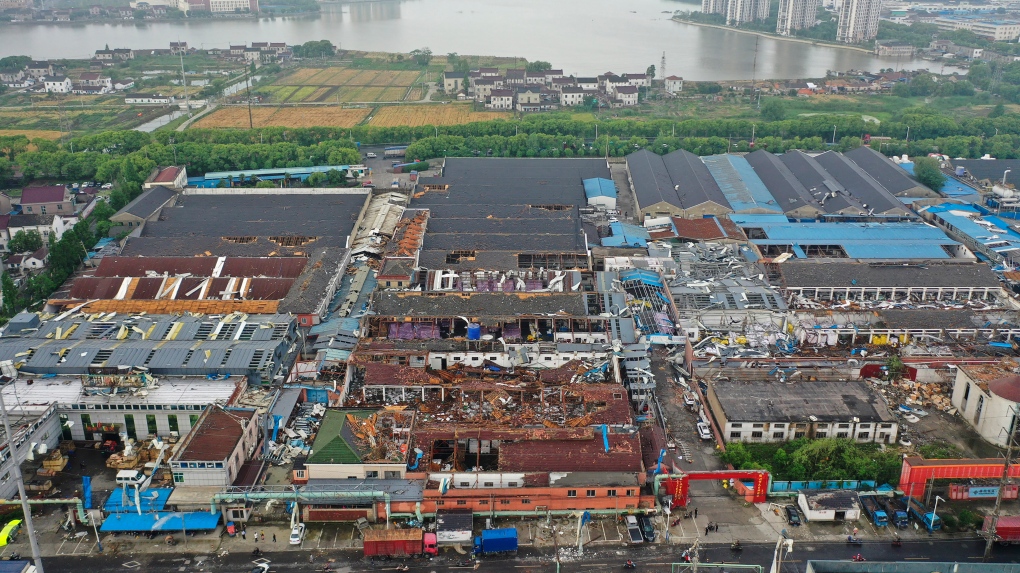 Damage to buildings from a reported tornado is seen in an aerial view in Shengze township in Suzhou in eastern China's Jiangsu Province, Saturday, May 15, 2021. (Chinatopix via AP)

Eight people died in the inland city of Wuhan on Friday night and four others in the town of Shengze, about 400 kilometers (250 miles) east in Jiangsu province, local governments said.

The first tornado struck Shengze about 7 p.m., damaging homes and factories and knocking out power, the official Xinhua News Agency reported. The Suzhou city government, which oversees the town, said in a social media post that four people had died and 149 others had minor injuries. Shengze is near Shanghai on China's east coast.

Another tornado hit Wuhan at about 8:40 p.m. with winds of 86 kilometers (53 miles) per hour, destroying more than two dozen homes and triggering a power outage affecting 26,600 households, Xinhua said. Officials in Wuhan said at a news conference Saturday that eight had died and 230 were injured.

Photos showed a swarm of rescuers searching through building debris in Wuhan after midnight Friday and workers clearing metallic debris at a factory in Shengze in the morning.

Wuhan is the city where COVID-19 was first detected in late 2019.

Tornados are rare in China. In July 2019, a tornado killed six people in the northeastern Liaoning province, and another tornado the following month killed eight on the southern resort island of Hainan.

In 2016, a tornado and accompanying hailstorm killed 98 people in the eastern Jiangsu province.